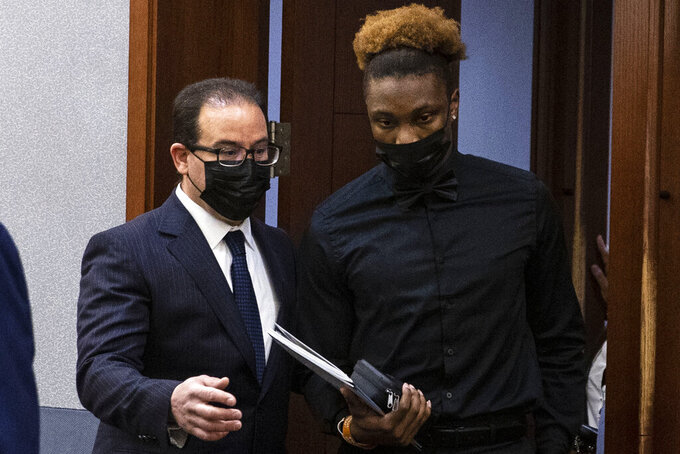 Ruggs didn’t have to appear in court Wednesday while his attorney, Richard Schonfeld, argued before Justice of the Peace Pro Tem Robert Walsh that although state law lets police and prosecutors obtain a report about his client’s blood-alcohol level following the early Nov. 2 crash, it doesn’t let a judge compel first-responders to testify about his physical condition.

Ruggs is due next week for a preliminary hearing of evidence alleging he was driving 156 mph (251 kph) with a blood-alcohol level of 0.16% — twice the legal limit in Nevada — before his Chevrolet Corvette slammed into the rear of Tina Tintor’s vehicle, which caught fire.

Tintor, 23, and her dog, Max, died as flames consumed her Toyota Rav4 SUV. Several of her family members sat with their attorney Wednesday in court but declined to comment.

Ruggs and his girlfriend, Kiara Je’nai Kilgo-Washington, were injured in the wreck.

Attorneys for Ruggs and Kilgo-Washington have declined to specify injuries to the couple.

Ruggs was seated in a wheelchair with a foam brace on his neck during his initial court appearance after the crash. His lower body was not visible behind a courtroom partition.

Ruggs, a 22-year-old former first-round NFL draft pick from Alabama, would serve at least a mandatory two years in prison and could get more than 50 years if he’s found guilty of DUI causing death or substantial injury and felony reckless driving.

He was released by the Raiders hours after the crash and is on house arrest with strict conditions after posting $150,000 bail.

Ruggs had been emerging as a star wide receiver this season with 24 catches in seven games for a team-high 469 yards and two touchdowns.