Will experience _ and lack of it _ be Super Bowl difference? 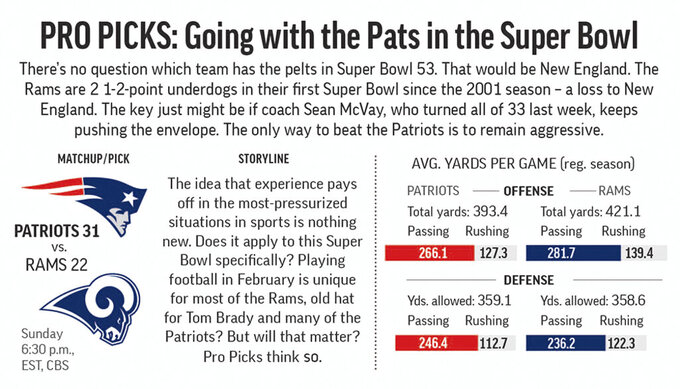 Graphic compares team stats for Patriots and Rams and predicts the winner of the Super Bowl; 3c x 2 1/2 inches;;

ATLANTA (AP) — The idea that experience pays off in the most-pressurized situations sports offer is nothing new. Does it apply to the Super Bowl in general, and this one specifically?

Recent history will tell us not really. The Super Bowl thing was something novel for virtually all of the Eagles last year, and they knocked off the perennial contender and frequent AFC champion Patriots.

Same thing in the 2014 game when Seattle routed a Peyton Manning-led Broncos team. The Saints with Drew Brees against the Colts, led by — you guessed it — Manning in the 2011 contest, too.

Then you can argue that the Patriots benefited greatly from the Falcons' lack of familiarity with putting away a championship two years ago. And that Denver — yep, that QB named Peyton again — used the experience edge perfectly against Carolina in 2016.

There's no question which team has the pelts in Super Bowl 53.

"I think you get to focus more on football (because of the know-how)," says Patriots receiver Julian Edelman, who will match up at times with the Rams' formidable cornerbacks Aqib Talib and Marcus Peters.

Maybe. Or maybe the Rams, who are 2½-point underdogs in their first Super Bowl since the 2001 season — a loss to New England — won't ever find that comfort zone so necessary at this point.

The key just might be if coach Sean McVay, who turned all of 33 last week, keeps pushing the envelope. The only way to beat the Patriots is to remain aggressive for 60 minutes, and possibly beyond. Maybe McVay needs to be a bit outlandish as well. Look up what Doug Pederson did last year in a masterful coaching performance.

"So, it's never too soon to be able to make a big impact in a big-time game," McVay says. "We certainly have a respect for that experience that the Patriots specifically have. We've got some guys on our team that do have that experience, but we've also got some really good football players that you feel like no moment is too big for them.

"We know that it's a big-time game, but I think our guys — whether they have played in this game before, whether they haven't — we expect them to play good football. When that ball is kicked off, it's just like any other game. Certainly, you don't shy away from the magnitude, but you're still playing football."

Playing football in February is unique for most of the Rams, old hat for Tom Brady and many of the Patriots. But will that matter?