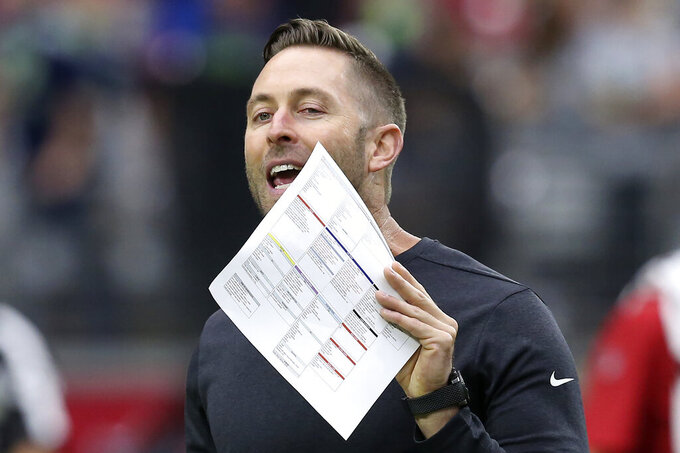 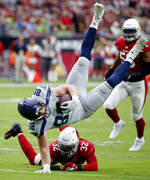 But with the Cardinals’ defense struggling through four games, changes were needed. A month without a win isn’t acceptable, even for a franchise that’s rebuilding.

“This is the NFL and everybody knows that every day,” Kingsbury said. “I don’t think any sort of roster move is going to open anybody’s eyes to that extent. We’re all under the same pressure and scrutiny, and we understand that. These guys are professionals, they understand that.

“These young guys have an opportunity now to step up, and I know they’re looking forward to it.”

Arizona (0-3-1) will likely have two rookies starting in the secondary when it goes on the road Sunday to face Cincinnati (0-4), which also just finished a frustrating September.

The Cardinals are already using Byron Murphy Jr. at cornerback after he was selected in the second round of the draft in April. He was thrust into a bigger role because of Patrick Peterson’s six-game suspension and Robert Alford’s season-ending leg injury.

Now Swearinger’s safety spot could be manned by rookies Deionte Thompson or Jalen Thompson. Third-year safety Budda Baker, who is third on the team with 29 tackles, is the other starter.

Murphy has been solid despite being a rookie. Baker said the Thompsons should be ready, too.

“This is their time to be a baller,” Baker said. “They’re young, but this is their time to play. I just told them to have fun. At the end of the day, we’re going to have a gameplan and it’s going to be a great gameplan. Just have fun and don’t think, because the more you think you’ll mess up plays.”

Arizona’s defense has struggled at just about everything this season. The Cardinals are 29th out of 32 teams in points allowed, giving up nearly 29 per game. They also rank 31st in total defense, 28th in rush defense and 23rd in pass defense.

For the secondary, one big issue is zero interceptions in four games.

“I’m surprised by that,” Cardinals defensive coordinator Vance Joseph said. “We’ve had chances. The ball’s been tipped and we’ve dropped a couple in big moments. I’m disappointed in that.”

Joseph said the defense has made improvements despite a lack of evidence on the scoreboard. The group has had good moments and even good quarters but struggled with giving up big plays and missed tackles.

“In this league, when you win, you feel like you can’t lose again,” Joseph said. “When you don’t, it feels like you can’t win. It’s the highs of the highs and the lows of the lows. Each week it changes and hopefully this is our time.”

Arizona doesn’t have much time to turn things around.

Players and coaches have stayed relatively confident and knew there might be ups and downs during Kingsbury’s first season, but Swearinger’s release showed them patience has limits.

“We’re not far, but it has to start now,” receiver Larry Fitzgerald said. “We can’t spot any more games in this division. Everybody’s rolling. San Francisco’s undefeated. The Rams have one loss. Seattle, too. We’ve got to get going.”