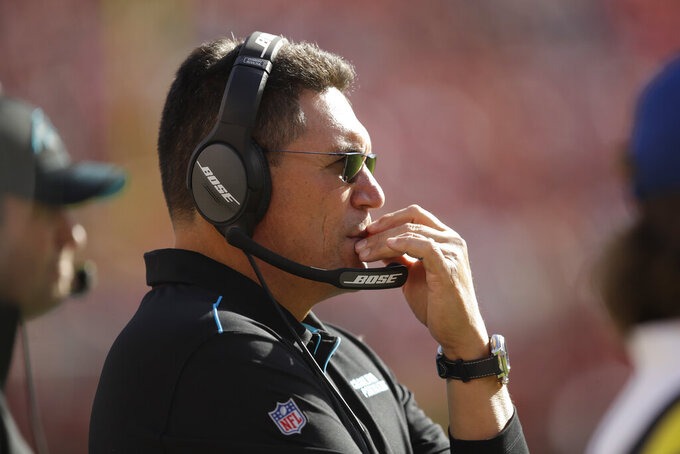 Carolina Panthers head coach Ron Rivera stands on the sidelines during the second half of an NFL football game against the San Francisco 49ers in Santa Clara, Calif., Sunday, Oct. 27, 2019. (AP Photo/Ben Margot)

SANTA CLARA, Calif. (AP) — All the mistakes that Kyle Allen avoided while winning his first five career starts, began piling up once he was forced to try to lead the Carolina Panthers back from a big deficit.

Now that the former undrafted free agent has lost for the first time in six starts in the NFL, the questions will surely mount about whether Cam Newton is healthy enough to take over the reins for Carolina.

Allen threw the first three interceptions of his career and took seven sacks as the Panthers were overwhelmed on both sides of the line of scrimmage by the San Francisco 49ers in a 51-13 loss on Sunday.

"Once you got behind the 8-ball a little bit, I think he pressed trying to make some throws that he probably didn't need to," coach Ron Rivera said. "I think there was some other throws he could have made. But again, he was trying to win a football game."

Allen had done just that in his brief career, winning the regular season finale last year and then all four starts this season for the Panthers (4-3) after Newton was sidelined with a foot injury.

Allen became the first quarterback in the Super Bowl era to win his first five starts while throwing no interceptions. Both those streaks ended against the 49ers.

He was intercepted in the second quarter, setting up the touchdown that put San Francisco up 21-3 and then threw two more in the second half to lead to Carolina's most lopsided loss in 17 years.

The Panthers hadn't faced a deficit of more than seven points during their four-game winning streak and hadn't trailed at all in the past three games, taking pressure off Allen.

But against the 49ers, they needed him to make plays and he wasn't able to deliver while being under near constant pressure from Nick Bosa and the rest of San Francisco's stellar defensive line.

He finished 19 for 37 for 158 yards with Carolina's only TD coming on a 40-yard run by Christian McCaffrey.

"I was inaccurate with the ball today," Allen said. "In the second half you saw a couple get away. Those turnovers in the third quarter just put our team in a bad position. You're not going to win games if you're turning the ball over and the other team is getting the ball. It's just putting our defense in a really bad position."

This performance will only raise questions about when Newton will be able to return. He traveled with the team for the first time since being sidelined following a loss in Week 2.

He worked out on the field before the game in a sign he could be getting closer to be able to return.

"Cam is still rehabbing," Rivera said. "There doesn't have to be a lot of questions, either, just so you know that. I'll tell you guys where he is on Monday. And I'll tell you where he is one Wednesday. You don't need to ask after that, to be honest with you."

Now the Panthers need to make sure this season doesn't spiral downward like it did a year ago following a blowout loss. Carolina started 6-2 in 2018 before a 52-21 loss at Pittsburgh started a seven-game skid as Newton struggled with a shoulder injury and the team fell apart.

The Panthers know the questions will come about whether a repeat is in order.

"That's totally legitimate," tight end Greg Olsen said. "To ignore that and pretend it's not going to happen, it happens if you allow it to happen. We allowed it to happen last year, never got our momentum back and it tanked our season. So, we're going to find out if this group is better. Is this group going to respond better than last year? Is it going to be just one bad game? That's the plan, but it doesn't just happen. You've got to make that happen."