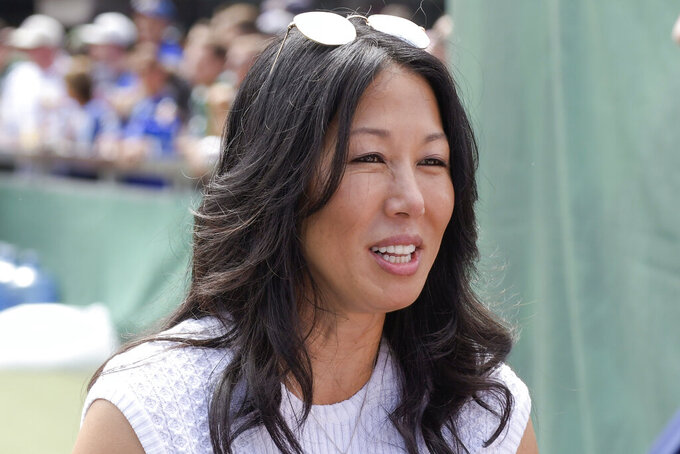 FILE - Buffalo Bills co-owner Kim Pegula speaks to a colleague before an NFL football game against the New York Jets, onSept. 8, 2019, in East Rutherford, N.J. Buffalo Bills and Sabres co-owner Kim Pegula is "progressing well" in rehabilitating from a health issue she experienced earlier this month, the family said in a statement released on Tuesday, June 28, 2022. (AP Photo/Bill Kostroun, File)

BUFFALO, N.Y. (AP) — Buffalo Bills and Sabres co-owner Kim Pegula is “progressing well” while rehabilitating from a health issue she experienced earlier this month, the family said in a statement released on Tuesday.

The family would only say Pegula is resting, while adding they are “grateful for the medical professionals providing her care, and to everyone for their prayers and well wishes.”

The family would not say whether Pegula remains in the intensive care unit of a Florida hospital or specify the medical issue in asking to continue respecting their need for privacy.

The statement is the first update on Pegula’s health in two weeks, when the family first revealed she was receiving medical care for what was called “some unexpected health issues.”

Kim Pegula was hospitalized shortly after celebrating her 53rd birthday. She is the wife of Terry Pegula, who turned his natural gas fortune into a Buffalo sports empire, with her serving as the public voice and face of ownership.

The Pegulas first purchased the Sabres in February 2011, a year after Terry Pegula sold his natural gas drilling rights to Royal Dutch Shell for $4.7 billion. The Pegulas then purchased the Bills from the estate of owner and founder Ralph Wilson in 2014 for what was a then-record price of $1.4 billion.

Kim Pegula is the only female owner of color in either league. She serves as president of both teams — becoming the first woman to do so in the NHL and NFL at the same time — and is on various committees, including the NFL’s workplace diversity committee and the NHL’s executive inclusion council.

Orphaned after being born in Seoul, South Korea, Kim was adopted by Ralph and Marilyn Kerr in 1974, and grew up in Fairport, New York, not far from Buffalo. She is Terry Pegula’s second wife.

Kim is 18 years younger than Terry, and long been considered the person to take over control in her husband’s succession plan. Their holdings also include the Sabres’ American Hockey League affiliate in Rochester, New York, the National Lacrosse League franchises in Buffalo and Rochester and a Nashville recording studio.

The couple have three children together, including Jessica Pegula, a pro tennis player, who is the eighth seed in preparing to compete at Wimbledon this week.

The Pegulas’ last public appearance in Buffalo came in the wake of the May mass shooting in which 10 Black people were killed at a grocery store. Joined by Bills and Sabres players and NFL Commissioner Roger Goodell, the Pegulas handed out groceries to the community.