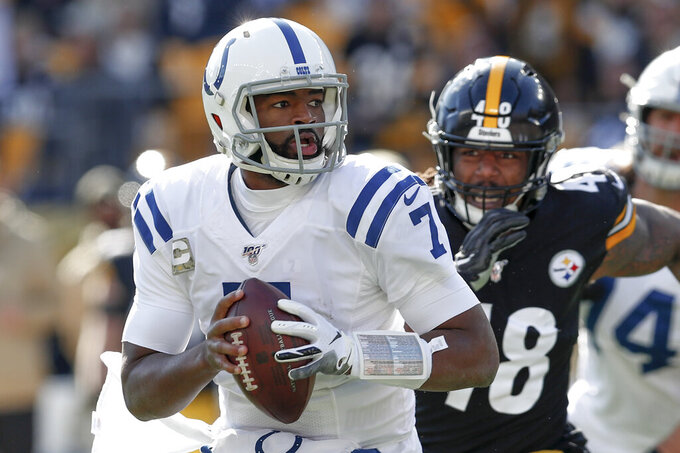 PITTSBURGH (AP) — For years, Bud Dupree and Cam Heyward would talk about getting together to train during the offseason. The discussion was always vague. No specifics or firm commitments. Then the months would pass, January would become April would become June and the chance for the longtime Pittsburgh Steelers teammates to meet up would evaporate.

Until last winter, when Dupree, an outside linebacker, joined defensive linemen Heyward, Javon Hargrave and Tyson Alualu in Louisiana to work out for former LSU defensive line guru Pete Jenkins. Together they honed their craft and bonded. Dupree's intensity was unmistakable, offering Heyward tangible proof Dupree was ready for the breakout season that'd always been just beyond his grasp during four years in which the former first-round pick tantalized with his talent but frustrated with his inconsistency.

Dupree downplayed the personal stakes heading into 2019 after the team opted not to sign him to an extension, instead relishing the chance to effectively bet on himself with a chance to hit the open market in 2020.

"He didn't make a big deal about getting a contract or anything," Heyward said. "Just worked his tail off and challenged himself."

In the process, he's become the week-in, week-out force the Steelers envisioned when they grabbed him with the 22nd overall pick in the 2015 draft. The 26-year-old is playing the best football of his career for the Steelers (4-4) heading into Sunday's visit by the Los Angeles Rams (5-3). Dupree has already matched his career high with six sacks, teaming up with T.J. Watt to become one of the NFL's top edge rushing tandems.

"(Dupree) has been a monster, as has T.J.," Steelers coach Mike Tomlin said. "They are really setting a pace off the edge and really providing the wave that the rest of us get to ride defensively. But that's the nature of outside linebacker play within our scheme. Particularly, when you draft them in Round 1. That is what they are supposed to look like in their mid-20s."

The problem for Dupree heading into his fifth season is that he's only looked like that occasionally. For every big-time play — he sacked Tom Brady in his debut in 2015 and memorably drilled Miami quarterback Matt Moore in a wild-card game the following season — there were long stretches when Dupree's No. 48 would all but disappear. And he knew it.

"Last year I missed a lot of sacks," said Dupree, who finished with 5½ sacks in 2018. "I had sacks in my hand that I missed. I just feel if I had finished that, we would have had a whole different year last year. So just being able to finish is big."

He's translated potential into production by relying on more than just his physical gifts. The 6-foot-4, 270-pound Dupree has become a dedicated student of the game.

"I think he's just become a lot smarter of a player as far as film study," Watt said. "We're bouncing a lot more notes off each other this year than we ever had (on) what we're seeing out there, certain tells that we know what certain plays are, if it's run or if it's pass. The guy's get off the ball is incredible and that's what allows him to beat a lot of guys off the edge."

Dupree is winning those battles even when opponents send two or three bodies at him. That's what the Indianapolis Colts did last Sunday on a critical play in the waning moments. The Colts faced third-and-1 at the Pittsburgh 22. A first down and Indianapolis could run the clock down to zero and attempt a short field goal to steal the victory. Dupree recognized the formation instantly and dropped Indianapolis running back Marlon Mack for a 3-yard loss. A chip shot for Adam Vinatieri became something significantly harder. And when his 43-yarder sailed well left of the uprights, the Steelers survived .

A year ago, maybe Dupree doesn't instantly diagnose the play. Maybe he's a split-second late. Maybe the Colts get the first down. Maybe Vinatieri makes the kick and Pittsburgh's playoff hopes are effectively squashed. They're not thanks in part to Dupree, who is delivering on defensive coordinator Keith Butler's prediction during training camp that Dupree was ready to live up to the expectations that come when you play outside linebacker in Pittsburgh.

Now, so does everyone else, potentially putting Dupree and the Steelers in an interesting spot next spring. Pittsburgh could place the franchise tag on Dupree in March, though it would cost somewhere close to $20 million. Or they could let Dupree hit the open market. Either way, Dupree knows he's fine.

"I mean, I'm straight on it," he said. "I'll play it by ear. I bet on myself. It helped me out. I'll probably make more money (next) year than I would have made on an extension."

Heyward isn't ready to think about Dupree moving on. After watching Dupree's evolution up close, Heyward is just fine with Pittsburgh doing what it can to make sure Dupree stays put.