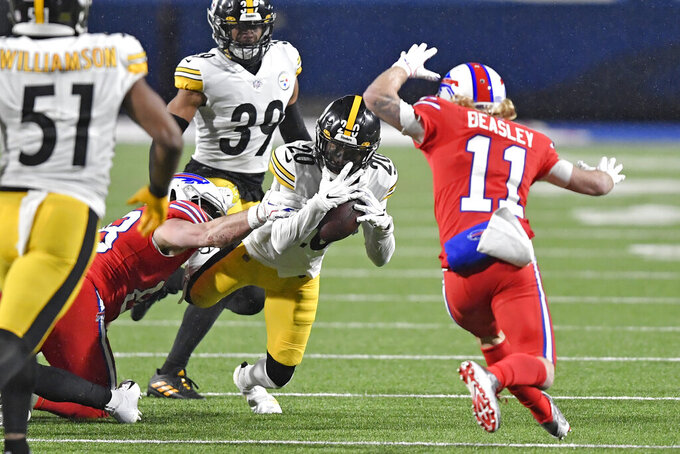 Pittsburgh Steelers cornerback Cameron Sutton (20) intercepts a pass during the first half of an NFL football game against the Buffalo Bills in Orchard Park, N.Y., Sunday, Dec. 13, 2020. (AP Photo/Adrian Kraus)

PITTSBURGH (AP) — Cam Sutton isn't picky. He can't afford to be. The Pittsburgh Steelers defensive back has spent too much time during his four seasons in the league bouncing around from spot to spot.

Nickelback. Dime back. Safety. Cornerback. Special teams ace. Sutton's responsibilities have often shifted from down to down, possession to possession, week to week.

“He’s the Swiss Army knife, too like (nickelback) Mike Hilton," Steelers All-Pro linebacker T.J. Watt said of Sutton. "He can do whatever you ask him to do.”

It's practically a job requirement for players like Sutton, ones who don't quite fit one particular role and instead find themselves carving out a valuable niche by dabbling in all of them.

That constant dabbling has come with obvious benefits. There isn't a situation the Steelers can place Sutton in where he feels uncomfortable, including the starting cornerback spot on Sunday night when the AFC North champions (12-4) host Cleveland (11-5) at Heinz Field.

Veteran Joe Haden is on the reserve/COVID-19 list and unavailable. That leaves Sutton as the best option to play opposite Steve Nelson as Pittsburgh searches for its first playoff victory in four years.

Anxious to help erase the memories of his only other postseason appearance, a 45-42 stunning home loss to Jacksonville in the 2017 divisional round. He saw 12 snaps that day, all on special teams, as the AFC's second-seeded team fell behind by three touchdowns early and never recovered.

“Obviously we had a great successful year,” Sutton said. “But we had an early exit.”

One the Steelers are hoping to avoid this time around. How Sutton fares against Jarvis Landry or whomever else the Browns line up against him will have a significant say in how it goes. Sutton has a healthy respect for Cleveland, pointing out the Browns are “playing with a lot of passion, a lot of hunger.”

“We’ve got to match that and intensify that to a whole other level,” he added.

Something that hasn't been a problem for Sutton during his breakthrough season, one in which he's found himself around the ball frequently. Sutton recorded a fumble recovery in three straight games at one point and his lone interception came early on in a 38-7 destruction of the Browns at Heinz Field on Oct. 18.

The uptick isn't a surprise to defensive coordinator Keith Butler, who has spent the last four years treating Sutton as a 5-foot-11, 188-pound roll of duct tape, putting him in whatever position happened to work during a given week. All that bouncing around has paid off. Sutton's understanding of the defense is deep and goes far beyond his assignment on a given play.

“He knows what everyone is doing," Butler said. "He knows where his help is and that is probably the biggest thing for him in terms of playing the position the way he has played it because he knows what he has beside him and what’s behind him. That always helps when you have players like that.”

It could also make Sutton an attractive and modestly priced target when he hits free agency in the offseason. He has the skills to play on the outside but also has a physical streak that allows him to thrive when lined up inside against tight ends. Asked if he has a position preference, Sutton drew on his time in Pittsburgh as proof it doesn't really matter where he plays just so long as he does.

“I’m at that point now, I’m at that level, confidence in myself and my ability and confidence around me, I don’t even want to limit myself,” Sutton said. "Why? I feel like I’ve kind of been productive in my time and it’s something I’m going to strive to build upon.”

Be it with the Steelers or elsewhere. It's telling of Sutton's professional approach that he lights up when talking about second-year defensive back Justin Layne. Following a slow start to his career in 2019, Layne's playing time has slowly increased in certain packages and there's a very real chance Layne take over Sutton's “Jack of All Trades/Master of None” role next season.

Not that it matters to Sutton. He has an acute appreciation for the transition Layne is making from college starter to NFL handyman.

“He’s on that learning curve,” Sutton said. “J Layne is my dog. He’s very hands-on. Definitely a guy I like to personally take on my own. He’s that guy you’ve got to give him that extra talk, that extra push, keep building his confidence, help him have that composure and controlling himself. ... I love his play and the direction that he's going.”

Consider it Sutton's way of paying it forward.

“I've just had a really good job of just being able to understand everything, being able to learn from a lot of veteran guys,” Sutton said. "Maybe I'm not having most of the reps I would want to have on a consistent basis, but it's about learning from the guys in front of you then when you get those reps, you can learn from that. ... (You've just got to) keep that sense of wanting more for yourself.”