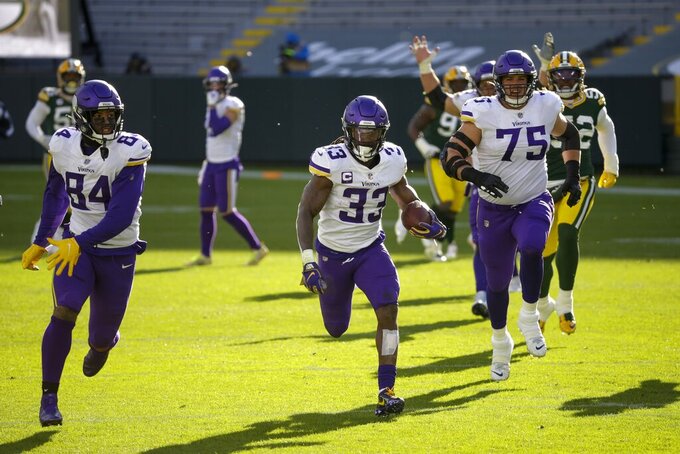 Minnesota Vikings' Dalvin Cook breaks away for a touchdown during the second half of an NFL football game against the Green Bay Packers Sunday, Nov. 1, 2020, in Green Bay, Wis. (AP Photo/Mike Roemer)

MINNEAPOLIS (AP) — The Minnesota Vikings have rarely shied from a ground-oriented approach on offense in seven seasons under coach Mike Zimmer, never more apparent than in their last game.

Dalvin Cook has made this strong-arm strategy viable, rather than some tired relic. With 30 rushes for 163 yards and three touchdowns — plus two catches for 63 yards and another score — Cook carried the Vikings to a potentially pivotal victory at Green Bay. As Kirk Cousins only attempted 14 passes, Cook became the first player with 30 carries for Minnesota since 2013.

“We’re going to have to ride this guy,” Zimmer said.

The Vikings have had a player reach 30-plus rushing attempts 17 times in their 60-year history, including six by single-game franchise record holder Adrian Peterson (35). The Vikings are 16-0-1 in those games.

The Vikings have run the ball on 49.6% of their plays, the third-most in the league. Baltimore, the NFL leader, employs a run-heavy quarterback in 2019 NFL MVP Lamar Jackson.

The nutritional value is unmistakable, as long as they're controlling the ball and scoring points. That's the way they tried to win with Cook's predecessor, too. Peterson, coincidentally, will be in Minnesota on Sunday with his latest team, the Detroit Lions.

They blew double-digit second-half leads and lost be one point to Tennessee and Seattle. They were also no-shows in one-sided defeats to Green Bay, Indianapolis and Atlanta. Their performance against Detroit (3-4) will reveal a lot about whether they're truly a darkhorse contender for the expanded playoffs or better off refocusing on the future.

That summary might sound familiar to the Lions, who were unsure if quarterback Matthew Stafford would be available after placing him this week on the COVID-19 reserve list.

“We’re doing some things really well,” coach Matt Patricia said. “We just have to learn how to finish better. I think that’s true all the way across the board.”

If Stafford is not cleared in time to play, the Lions would have to choose between Chase Daniel or David Blough. The 34-year-old Daniel has started just five games in his career with seven touchdowns and five interceptions, though he helped lead Chicago to a 16-6 victory over the Vikings last season by going 22 of 30 with a touchdown in relief of an injured Mitch Trubisky.

Blough went 0-5 as a starter last year when Stafford was out with a broken back, with four touchdown passes and six interceptions after the undrafted rookie was acquired from Cleveland. That included a loss at Minnesota, when Blough had one touchdown, was sacked five times and intercepted twice in a 20-7 loss.

Everson Griffen expected to face his former team this month, but the reunion was moved up two weeks when Dallas traded him to Detroit. The 11th-year defensive end with 77 career sacks will make his debut with the Lions on Sunday, a convenient addition to the lineup with defensive end Trey Flowers going on short-term injured reserve.

In addition to Peterson and Griffen, backup safety Jayron Kearse will make his return to Minnesota. Griffen could find himself lined up across from Vikings left tackle Riley Reiff, who's been blocking as well as ever in his fourth season with the team. He played his first five years with the Lions.

Marvin Hall has taken only one-fourth of Detroit's offensive snaps, behind Marvin Jones, Kenny Golladay, Danny Amendola and rookie Quintez Cephus, but he has given the Lions a legitimate deep threat with an average of 24 yards per catch. With Golladay hampered by a hip injury this week, Hall could find more opportunity against a struggling Vikings secondary.

“The thing that he brings for us is speed,” Lions offensive coordinator Darrell Bevell said. “You can feel it, and that can really change some things in the back end.”

The Vikings, who have surrendered 30.6 points per game for the fourth-worst average in the league and rank third-to-last in passing yards allowed, have been fighting a dual challenge of inexperience and injuries at cornerback all season. The only one who has played in every game is rookie starter Jeff Gladney. Chris Jones, a recent waiver claim from the Lions, could see his first action for Minnesota with five other cornerbacks dealing with injuries this week.

The Vikings have lost five straight at U.S. Bank Stadium, since beating Blough and the Lions on Dec. 8, 2019. That's their longest such streak since 2011 and approaching the franchise record, set between the 1966-67 seasons when the Vikings lost six consecutive games at Metropolitan Stadium and tied a seventh before stopping the skid.

Zimmer spoke to the players this week about restoring their home-field edge, even if the absence of fans has negated the usual noise advantage.