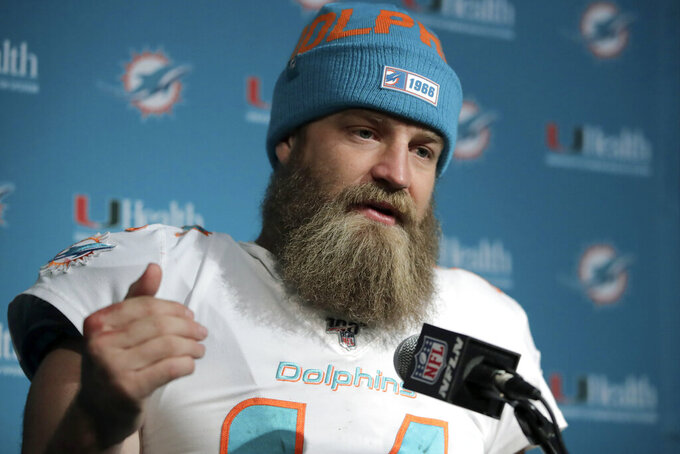 FILE - In this Dec. 29, 2019, file photo, Miami Dolphins quarterback Ryan Fitzpatrick speaks to the media following an NFL football game against the New England Patriots in Foxborough, Mass. Quarterback facial hair is sure to be front and center when the Jacksonville Jaguars (1-1) host the Miami Dolphins (0-2) on Thursday night, Sept. 24, 2020. Miami’s Ryan Fitzpatrick has a bushy beard that covers much of his face and engulfs his chin strap; Jacksonville’s Gardner Minshew has a unkept horseshoe mustache that seems to go perfectly with his flowing locks. (AP Photo/Charles Krupa, File)

JACKSONVILLE, Fla. (AP) — It’s the Beard versus the 'Stache in prime time. Fitzmagic on one sideline, Minshew Mania on the other.

Maybe the loser should have to shave.

Quarterback facial hair is sure to be front and center when the Jacksonville Jaguars (1-1) host the Miami Dolphins (0-2) on Thursday night.

Miami’s Ryan Fitzpatrick has a bushy beard that covers much of his face and engulfs his chin strap; Jacksonville’s Gardner Minshew has a unkept horseshoe mustache that seems to go perfectly with his flowing locks.

“I think the beard is a cooler look,” Fitzpatrick said Tuesday. “I think guys that grow mustaches a lot of times have patchy sides for their beards, so they just stick with the mustache.”

The 24-year-old Minshew politely fired back at Fitzpatrick, 37.

“I’ll let mine speak for itself,” Minshew said. “I think I’ve shown I can grow a beard with no patchy sides. But you know, I’m going to have respect for my elders, especially when they’re much, much elder. I’ll be respectful.”

One of Minshew’s teammates, defensive end Josh Allen, might have a tougher time choosing between the two looks.

“We were in a little team meeting and somebody just brought up the beard and I was like, ‘Bruh does have a really good beard because his chinstrap is so small, and the beard is just everywhere.’ It’s kind of cool,” Allen said before quickly adding that he’ll “rock with G-Money.”

Allen is more of a fan of Fitzpatrick’s beard than the quarterback’s wife.

Both QBs looked just fine in close losses last week. Minshew threw three TD passes for the third consecutive game, but he had two somewhat-fluky interceptions in a 33-30 loss at Tennessee.

Fitzpatrick threw for 328 yards and two touchdowns in a 31-28 loss to Buffalo. He put the Dolphins ahead in the fourth quarter before Josh Allen rallied the Bills against Miami’s struggling defense.

Fitzpatrick has won his past four starts against Jacksonville — each one with a different team. He beat the Jags with the New York Jets in 2015, with Houston in 2014, with Tennessee in 2013 and with Buffalo in 2012.

He’s a part of one of the youngest teams in the NFL this year and will be facing another one filled with first- and second-year players, led by Minshew.

“He’s had a great start to the season. He’s a guy that I don’t think I’ve played against him, so I’m excited to watch him play and see how he does.”

After Fitzpatrick led the Dolphins in rushing last year, the team acquired veteran running backs Matt Breida and Jordan Howard to improve the ground game. Through two weeks they’ve combined for only 70 yards rushing on 25 carries, an average of 2.8 per carry.

“There is only one football,” offensive coordinator Chan Gailey said. “Nobody ever gets it enough. When you have good running backs, everybody cannot touch it as much as they would like.”

The Jaguars don't blitz much, but they might need to start if they can't create more quarterback pressure. They have two sacks in two games — only Carolina and Las Vegas have fewer.

“We all have to take that pride in just getting to the quarterback more, especially I do,” said Allen, who had 10 1/2 sacks and made the Pro Bowl as a rookie last year. “So I’ve just been grinding as much as I can and I’ve been thinking about all the missed rushes that I could’ve had. Just learn from that and just move forward.”

The Dolphins’ secondary is sure to get tested by Minshew after allowing 413 yards passing last week against the Bills. Josh Allen’s receivers were often wide open, and Miami’s cornerbacks were repeatedly exposed on crossing routes in man coverage.

After Byron Jones was sidelined in the first quarter by a groin injury, former Pro Bowler Xavien Howard and first-round pick Noah Igbinoghene both struggled. The solution?

“My message to the guys is the guys we put you on, those are the guys we expect you to cover,” Flores said.