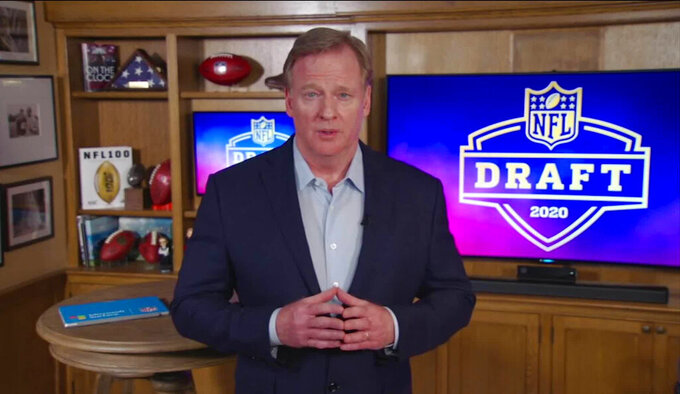 In this still image from video provided by the NFL, NFL Commissioner Roger Goodell speaks from his home in Bronxville, N.Y., during the NFL football draft Thursday, April 23, 2020. (NFL via AP)

The first night of the NFL draft averaged a record 15.6 million viewers on television, easily shattering the record set six years ago.

Thursday night's first round was aired on ABC, ESPN, the NFL Network and ESPN Deportes. The coverage peaked from 8:45-9 p.m. EDT when 19.6 million viewers tuned in, according to Nielsen. That is up 37% over last year's 11.4 million.

The draft was the first live U.S. sporting event since the coronavirus pandemic. The draft originally was to be held in Las Vegas but is taking place virtually.

ESPN and the NFL Network have teamed on a combined production. ABC, like ESPN a part of The Walt Disney Co., has a separate presentation the first two nights, then will simulcast the ESPN/NFL Network broadcast on Saturday.

Ohio had the top three rated markets: Columbus at 16.7, followed by Cleveland (15.9) and Cincinnati (15.6). The rating is the percentage of television households tuned in.

Players with ties to Ohio State were selected with the top three picks. Joe Burrow, taken first overall by the Bengals, began college at Ohio State and transferred to LSU, where he led the Tigers to the national title and won the Heisman Trophy.

“The theme of hope is always prevalent in the NFL, especially with regard to the draft,” Commissioner Roger Goodell said in a statement. “In 2020, that’s especially true, as we help honor healthcare workers, first responders, and others on the front lines of the battle with COVID-19 while giving our fans something to cheer about as we celebrate the next generation of NFL stars.”