Jaguars likely to be without starting LT Robinson for opener 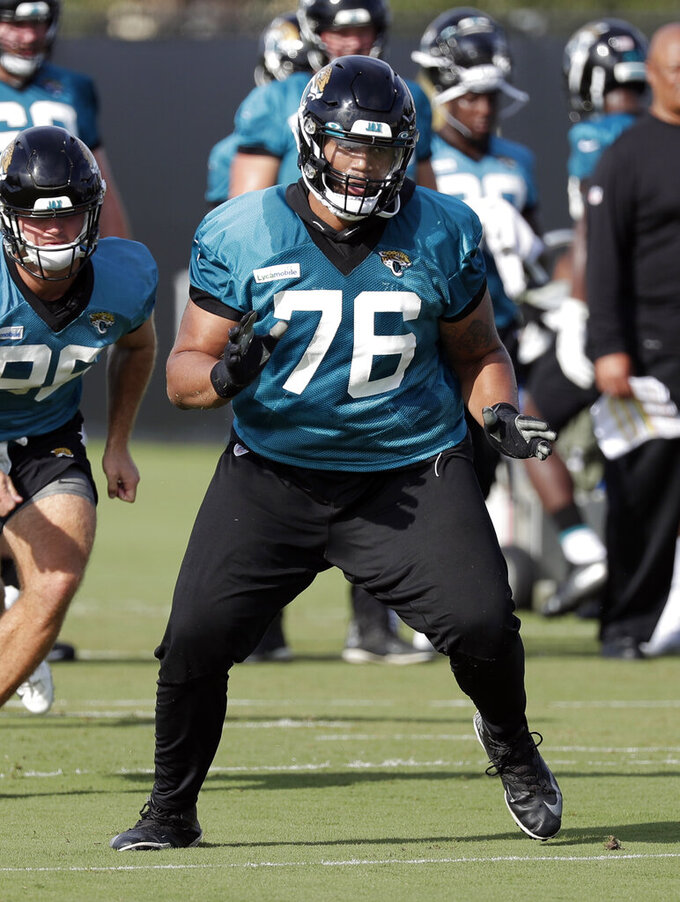 FILE - In this July 26, 2019, file photo, Jacksonville Jaguars offensive tackle Will Richardson (76) performs a drill during NFL football practice at the teams training facility in Jacksonville, Fla. The Jacksonville Jaguars likely will be without starting left tackle Cam Robinson for their season opener Making matters worse, backup offensive tackle Cedric Ogbuehi was ruled out because of a nagging hamstring injury. That leaves second-year pro Will Richardson to make his first career start, and not at his usual position. (AP Photo/John Raoux, File)

JACKSONVILLE, Fla. (AP) — The Jacksonville Jaguars likely will be without starting left tackle Cam Robinson for their season opener — and maybe longer.

It's a potentially significant setback for an offense that was so ravaged by injuries in 2018 that coach Doug Marrone completely revamped his approach to training camp and the preseason this year. Marrone simply wanted to get to the regular season as healthy as possible.

Robinson injured his right knee in practice Thursday — it gave out during a non-contact, pass-blocking drill — and was listed as doubtful to play against Kansas City. Marrone said he didn't have knowledge of test results.

Making matters worse for the Jaguars, backup offensive tackle Cedric Ogbuehi was ruled out because of a nagging hamstring injury. That leaves second-year pro Will Richardson to make his first career start — and not at his usual position. It also means the Jags will have two tackles making their first career starts against the Chiefs; second-round pick Jawaan Taylor is the team's starting right tackle.

A fourth-round draft pick from North Carolina State in 2018, Richardson spent most of training camp vying for a starting spot at right guard while also getting reps at right tackle. Now he will shift over after two days of practice and get tasked with blocking standout pass-rusher Frank Clark, who recorded 35 sacks the last four years with Seattle. Clark signed a five-year, $104 million deal to join Kansas City in free agency.

Richardson last played left tackle for a kneel-down play during his senior season in college.

"I haven't gotten as much time there as I would like, of course, but at the same time, I've been playing tackle all my life," Richardson said. "It's just about taking the little things and taking them over to the left side."

Richardson has been one of the team's biggest surprises of training camp. He missed all of last season because of a knee injury, but blossomed into a versatile backup and potential starter in Year 2. Several assistant coaches and front-office personnel believe he will be a long-time starter in the league.

"I feel like this year I'm definitely in a lot better stage to handle this predicament that they're putting me in and not only just handle it, but do well at it. That's my main goal: to go out here and not only show them that I can play it, but show them I can play good."