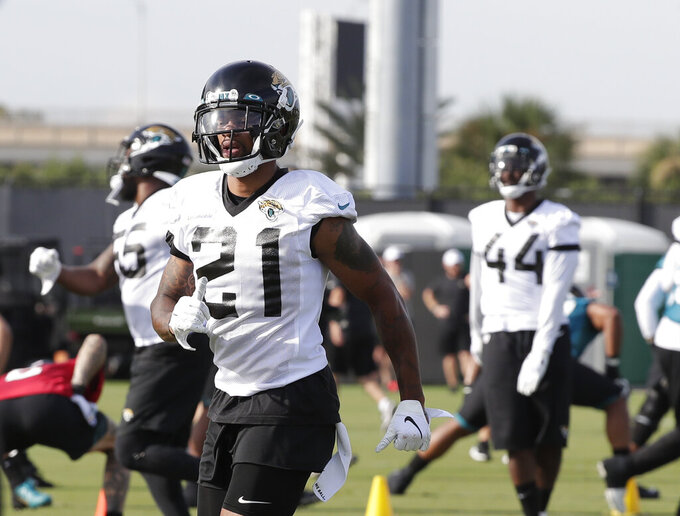 After running what many believed to be the NFL's toughest training camp the last two years, Coughlin and Marrone are pretty much taking it easy on the Jacksonville Jaguars.

It's a complete about-face for two old-school coaches who seem to take pleasure in grinding guys into the ground before the season.

Coughlin, the team's top executive, and Marrone, the head coach, teamed up in 2017 and started pounding players into shape. The Jaguars were in full pads for 14 consecutive days to open camp in 2017 and 11 in a row last year. All of them took place outside, in Florida's sweltering summer heat and humidity.

But following a 5-11 season in which the Jaguars ended up with nearly 30 players, including several offensive starters, on injured reserve and were without running back Leonard Fournette for half the year, Coughlin and Marrone decided to take a different approach.

The kinder, gentler Jags are on the field nearly two hours earlier than they were in 2018, avoiding the hottest part of the day as well as afternoon thunderstorms. They get 90 minutes after practice for lunch and to visit with family and friends.

They have recovery time built into the schedule, too, allowing players to get cryotherapy, cupping, dry needling or other therapeutic care after lunch.

They also leave the facility in the afternoon and hold meetings at a nearby hotel, providing players with a brief break to travel between venues and allowing them to go straight to their rooms once the nightly sessions end.

"It's way different," veteran defensive end Calais Campbell said. "I think the team is maturing and he's allowing us to be pros and to kind of do what we need to do to get ready. We're still working really hard, getting a lot of good quality reps out there, competing."

The practice pace has been slowed, too, but likely will pick up next week when the Jaguars spend two days working opposite the Ravens in Baltimore.

Marrone said the decision to lighten the load started when owner Shad Khan asked how he planned to reduce the number of injuries in January. Marrone started digging into research and talking to experts. He learned that an unusually high number of soft-tissue injuries occur during the first 10 days of camp, while players are still getting acclimated to the heat and tempo.

"It's my responsibility to make sure that we do the right things for the players, so with the information that I have, that's why we're doing what we're doing," Marrone said. "Now, in the same sentence, how do we get everything in that we need to get in to be a good football team? We're still getting the same amount of work in. I just like to say that we're working smarter."

No one can blame Jacksonville for trying something new following last year's debacle.

Campbell and guard Andrew Norwell were among the key starters banged up during 2018 camp. Center Brandon Linder sprained a knee in the exhibition opener, and the injuries really started to mount from there. Receiver Marqise Lee tore several knee ligaments in the preseason finale. Fournette went down in the regular-season opener. Left tackle Cam Robinson and cornerback D.J. Hayden got hurt in Week 2.

The Jaguars lost nine of 10 games following a 3-1 start, ruining a year that began amid Super Bowl aspirations.

"Last season kind of woke a lot of guys up," Fournette said.

Coughlin and Marrone included. They were raised to believe you "set the tone" in camp, Marrone said. But players typically stay in better shape year-round, reducing the need for an ultra-physical — and risky — preseason.

"Have to be smarter than that," Marrone said.