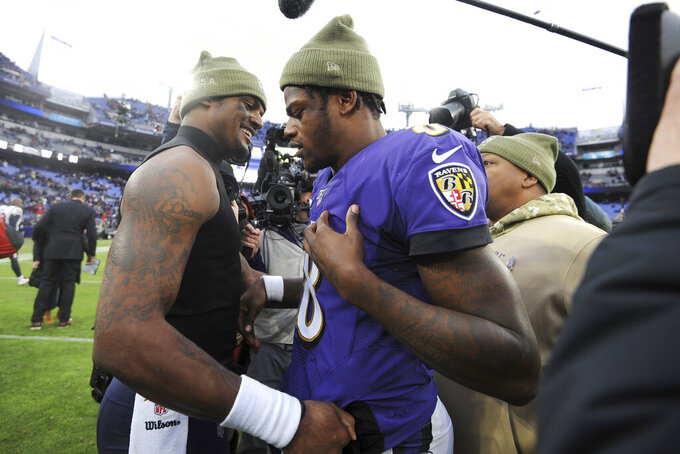 NEW YORK (AP) — Heading into the stretch run of the regular season, the NFL’s top teams are trying to find and maintain their winning form as they get ready for the playoffs.

The top seven teams in the latest AP Pro32 poll remained the same from last week. In fact, eight of the top 10 teams all won in Week 11 and the other two, Seattle and Green Bay, had byes.

The Baltimore Ravens are on top, earning 10 of the 12 first-place votes for 378 points in balloting Tuesday by media members who regularly cover the NFL. The Ravens (8-2) have won six in a row and are coming off a 41-7 rout the Houston Texans.

“That Lamar Jackson-Deshaun Watson showdown turned out to be no contest at all, as Jackson put in yet another MVP-worthy performance,” Newsday's Bob Glauber said.

The Ravens will close Week 12 when they head to Los Angeles to take on the Rams next Monday night.

The New England Patriots (9-1) received the other two first-place votes for 372 points to stay in the No. 2 spot.

“Bill Belichick has boasted several suffocating defenses during his glorious reign in Foxborough, but this current unit may just rank at the head of the class,” said Ira Kaufman of Fox 13 in Tampa, Florida.

The top two teams in the NFC West, the San Francisco 49ers and the Seahawks, are next and the Packers round out the top five. The 49ers host the Packers on Sunday night in one of the top matchups of the week.

Drew Brees and the New Orleans Saints got back on the winning track with a 34-17 victory over the Tampa Bay Buccaneers to maintain the No. 6 spot.

And Minnesota Vikings overcame a 20-0 halftime deficit to rally past the Denver Broncos 27-23 and stay at No. 7.

Patrick Mahomes and the Kansas City Chiefs moved up a spot to No. 8 after holding off the Los Angeles Chargers 24-17 in Mexico City on Monday night. The Chiefs will have their bye week to rest up as they try to hold off the surprising Oakland Raiders in the AFC West.

The Dallas Cowboys inched up one place to No. 9 after piling up 509 yards in handling the Detroit Lions 35-27. The Cowboys have a big challenge this week as they head to Foxborough, Massachusetts, to take on the Tom Brady and the Patriots.