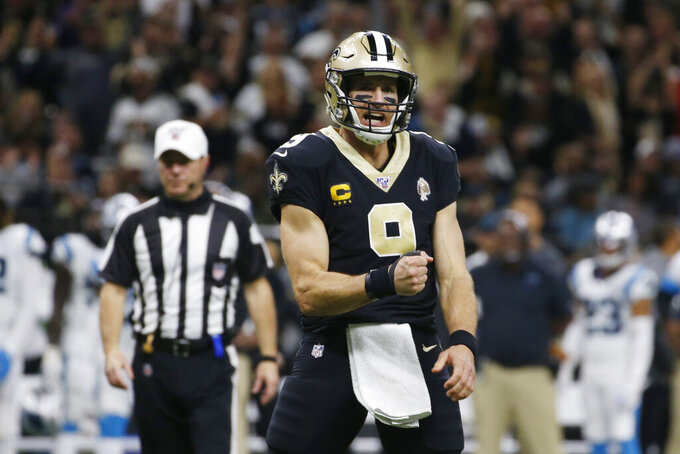 New Orleans Saints quarterback Drew Brees (9) gestures after a touchdown by wide receiver Michael Thomas (13), during the second half at an NFL football game against the Carolina Panthers, Sunday, Nov. 24, 2019, in New Orleans. (AP Photo/Butch Dill)

NEW ORLEANS (AP) — Coach Sean Payton’s New Orleans Saints have handled adversity all season, and their resilience was on display again in their latest triumph.

Their 34-31 victory over Carolina on Wil Lutz’s last-second, 33-yard field goal despite another significant injury, a slew of costly penalties and two fourth-quarter turnovers.

“We can’t look past some of the things that need to be addressed so in a later game it doesn’t come back to bite us, but that all being said, that was a good grit win,” Payton said Monday. “I was proud we fought through it.”

Several setbacks easily could have pointed the game in the other direction.

Second-team All-Pro offensive tackle Terron Armstead left with an ankle injury on the second series and did not return, forcing the Saints to play without two key linemen. Starting guard Andrus Peat has been out since breaking his arm against Atlanta on Nov. 10, but New Orleans still finished with 418 yards.

The Saints were penalized 12 times for 123 yards, and several were crucial. An unnecessary roughness flag on defensive end Cam Jordan prolonged a Carolina possession that appeared to end with a second consecutive sack. It turned into a mammoth 17-play, 68-yard touchdown drive at the end of the first half.

A replay review of a challenge by Carolina coach Ron Rivera resulted in a pass interference call on rookie defensive back Chauncey Gardner-Johnson, giving the Panthers a first-and-goal at the 3 with 2:21 left.

Instead of wilting at being on the wrong end of a rule change put in place because of the lack of an interference flag on the Los Angeles Rams against the Saints near the end of regulation in last season’s NFC championship game, the defense drove Carolina back 7 yards on the next three plays, leading to a missed field goal.

Brees, who had thrown an interception at midfield earlier in the quarter, then led an 11-play, 65-yard drive for the winning points.

It was not pretty until then, but the Saints will take it.

After going 5-0 while Brees was sidelined by a thumb injury earlier in the season, the Saints can earn the top seed in the NFC playoffs by winning their next five with him.

“If you give (Brees) the ball with the targets he has with that much time on the clock, we can go out there and be able to score on anybody,” tight end Jared Cook said. “That’s how good he is and that’s how good we are collectively as a team when a game’s on the line and we need those points.”

Brees and the passing game are clicking as if he never missed time. Since his return against Arizona, he is 124 of 162 (76.5 percent) for 1,199 yards and nine touchdowns with two interceptions for a passer rating of 110.1 in four games.

The Saints are racking up 7.8 penalties per game, the second-highest number in Payton’s 14-year tenure behind 2015, including an abnormally high frequency of holding and hands to the face calls.

“It’s troubling,” Payton said. “It’s going to cost us in a bigger game, so we’ve got to work on that and that starts certainly with me and our staff. It’s something we definitely have to improve on.”

After a slow start, Cook has been everything the Saints thought he would be when they signed him in the offseason as a free agent. His 99 receiving yards were a season high, and he scored a touchdown for the fourth time in five games.

Safety Marcus Williams missed a tackle on Carolina running back Christian McCaffrey’s scoring run and also was penalized 29 yards for pass interference in the end zone, setting up the Panthers’ tying touchdown in the fourth quarter.

Armstead’s ankle injury could be another setback in his injury-filled career. An All-Pro caliber performer when he is on the field, he never has played more than 14 games in his seven years in the NFL.

104 — The receptions for wide receiver Michael Thomas, the most after 11 games in NFL history. Marvin Harrison had the previous high with 100 for the Colts in 2003.

The Saints can clinch the NFC South by winning at Atlanta on Thanksgiving night. The Falcons (3-8) beat the Saints 26-9 on Nov. 10 as a 14-point underdog. After that comes a date with San Francisco that could help decide the No. 1 seed in the NFC playoffs.