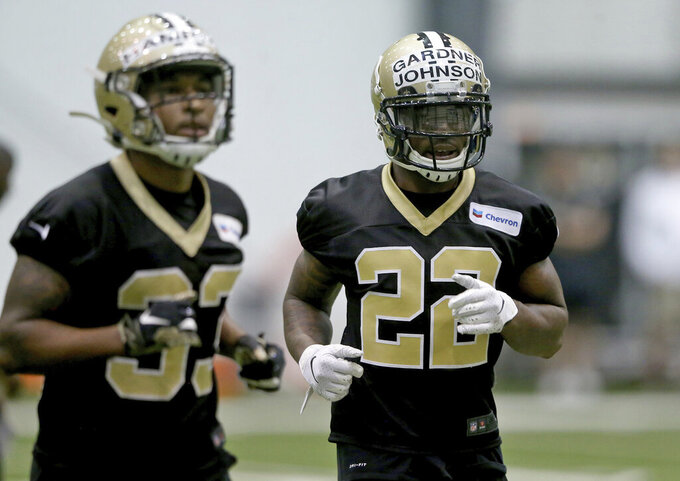 "It's limitless what this player can do," Glenn said Saturday. "We're just excited to have him and I'm sure DA's going to make schemes to be able to use this player, to make sure his versatility is used out there."

So much for tempering expectations for a player who hasn't even practiced against Saints veterans yet.

"He does have the speed and the mentality to go out there and play corner, but he can play nickel, he can play in the box, he can play deep safety, so you have fun with players like that," Glenn said. "I'm excited to see what all we can do with him. And plus, he has the mental capacity to be able to take all that information in and apply it right to the field."

The Saints, who entered the 2019 NFL draft without a fourth-round pick, traded up 11 spots to take the 5-foot-11, 210-pound Gardner-Johnson, who played both nickel back and safety at Florida.

He intercepted nine passes for the Gators, returning three for touchdowns. Four of his interceptions — and two of his TD returns — came last season, when he also had three sacks, nine tackles for losses, two pass breakups and finished with a total of 71 tackles.

During practice Saturday, Gardner-Johnson intercepted one pass and tipped another that wound up being intercepted by fellow rookie safety Saquon Hampton, a sixth-rounder out of Rutgers who was the Saints' third overall draft choice.

"It's just exciting to know you've got a good player that you had rated high that's on your team," Glenn said. "So with (Gardner-Johnson) and Saquon, it was the same thing with both of those guys."

New Orleans already has two veteran starting safeties coming back — fourth-year pro Vonn Bell on the strong side and third-year player Marcus Williams playing deep. But the Saints have been known to employ three-safety alignments and there was not a lot of depth in that position group following the release of Kurt Coleman this offseason.

Gardner-Johnson stopped short of predicting a prominent role for himself as a rookie, but didn't sell himself short, either.

"I could play immediately, but that's on me," he said. "I'm just ready to get out there, have fun and make an impression.

"I'm not really worried about where I'm at out there on the field, or what position," he added. "I'm just ready to go out there and play football."

While Gardner-Johnson was gratified the Saints traded up to select him, he called that "one minor step to something better."

Glenn said the Saints sought to "stress" Gardner-Johnson during Saturday's practice by giving him a variety of defensive back assignments on the defense, including nickel back, safety in the base defense and safety in passing situations that employed more than four defensive backs.

"He's smart, and he's quickly picked up the installation," Saints head coach Sean Payton noted. "You can see he's versatile. I think he can play over the slot in the nickel role, and also as a safety."

For most of Gardner-Johnson's Florida career, his last name was Gardner. He changed it before his senior season to honor his step-father, Brian Johnson, who had been in his life since he was about 3-years-old.

"He ain't missed a game," Gardner-Johnson said. "He's always been in my life. ... My dad's a basketball guy, but whatever I loved, he loved. Wherever I was at, he was at."

Gardner-Johnson also has considerable history with Glenn. They met when Glenn was helping out at an "Opening" football camp for high school standouts in Oregon. Glenn recalled that Gardner-Johnson sometimes challenged instructors who criticized him, but not in a disrespectful way.

"When we butted heads, I thought that was cool that he stood up for himself," Glenn said, adding that he kept in touch with Gardner-Johnson during his college career. "I'd always text him. It was funny how these things come around. You know, the world is round, man, and he ended up coming to us. So, it's a good deal."

Notes: Payton said he has not heard from NFL headquarters regarding possible disciplinary action against defensive tackle David Onyemata, who received a misdemeanor marijuana citation early this offseason. Onyemata could be suspended up to four games, but Payton said, "I don't know that that's going to happen," and added that the Saints are preparing for the season as if Onyemata won't miss any action.