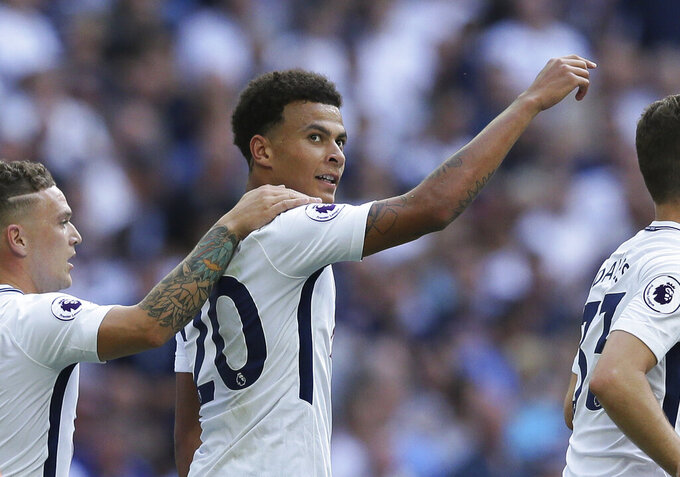 Premier League club Tottenham is borrowing $220 million using the Bank of England's emergency pandemic loan scheme to cope with the absence of spectators and the cancellation of two NFL games it was to stage this year.

The north London club revealed the financial impact of the coronavirus pandemic as the Premier League advanced plans for the competition to end its 100-day shutdown in two weeks with games closed to supporters.

During a conference call, clubs agreed to adopt the temporary change in world football laws and raise the number of substitutes allowed in games from three to five, with the bench increasing from seven to nine players.

Clubs also agreed in principle — after weeks of fraught discussions — to using neutral venues for games that police deem cannot be held at home stadiums due to concerns about fans gathering outside.

The season is to resume on June 17 with Aston Villa's home home against Sheffield United, followed by Manchester City against Arsenal.

But there is still no agreement among clubs on how to settle the final standings if the season has to be halted again — and curtailed.

Former Premier League chairman Dave Richards said it was too early to be resuming with the British government on Wednesday recording 1,871 new COVID-19 cases and an additional 359 deaths which took the overall tally to near 40,000.

“I don’t believe the time is right I think with the deaths and the number of people that are catching it, I believe it is just too early," Richards said at a SoccerEx online conference. "But it all comes down to money in the end because we have contracts with broadcasters and everything.

“No matter how much money is involved, the time is not right for the public to be watching it on TV. It’s a few weeks yet before we should."

But Tottenham's need for a credit facility underscored the necessity of playing again, to reduce the hundreds of millions of dollars in rebates the league's broadcasters will be owed even if the competition is completed.

The club announced it secured a loan of 175 million pounds after being eligible for the Bank of England’s COVID Corporate Financing Facility and said it would not be spent on player signings.

There are already loans of 637 million pounds to service that were taken out to fund the 1 billion pound stadium that opened last year and can fit more than 60,000 people.

Tottenham said its revenue loss due to the absence of fans, cancellation of stadium events and Premier League broadcast rebates may exceed 200 million pounds up to June 2021.

“It is imperative that we now all work together — scientists, technologists, the government and the live events sector — to find a safe way to bring spectators back to sport and entertainment venues," Tottenham chairman Daniel Levy said. "Collectively, we have the ability to support the development of new technologies to make this possible and to once again experience the passion of fans at live events.”

Tottenham is struggling to qualify for the lucrative Champions League next season. The 2019 finalist is eighth in the Premier League, seven points behind fourth-placed Chelsea with nine rounds remaining.