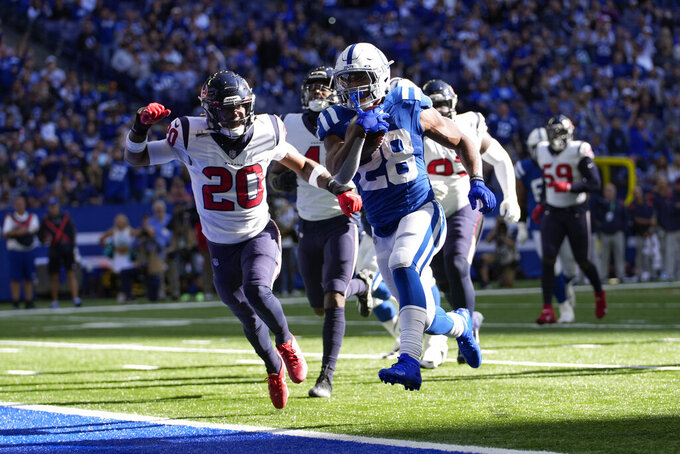 Indianapolis Colts' Jonathan Taylor (28) runs past Houston Texans' Justin Reid (20) for a touchdown during the second half of an NFL football game, Sunday, Oct. 17, 2021, in Indianapolis. (AP Photo/AJ Mast)

While it's too early to write off any NFL team's season — oh wait, we forgot about Detroit, Houston, Miami, Jacksonville and the rotten Big Apple — there is plenty of angst spread across the lower ends of the standings.

As we dismiss those clubs mentioned above, we also present a look at the teams who have entered the danger zone far too early. Such projected contenders as the Colts, Browns, Vikings, Steelers, Seahawks and Patriots have almost wiggled out of whatever wiggle room they might have possessed.

Who has it toughest is difficult to decipher. Maybe the Browns (4-3) and Steelers (3-3) in an AFC North where the resourceful Ravens (5-1) keep winning and the Bengals (4-2) are suddenly a factor.

The Vikings (3-3) are in a similar situation as New England, needing a huge leap in class to compete with Green Bay (5-1), and with their next four games against teams with a combined 19-5 record.

Then there's Seattle (2-4) in the rugged NFC West minus, for now, Russell Wilson and with holes in the defense even Pete Carroll can't seem to patch.

“But there are no options,” Carroll says. "You’ve got to come back. We’ve got to battle. That’s how we do it.”

Not enough, so far.

A look at the precipices some NFL teams are teetering at:

Starting 0-3 and 2-4 with your newly acquired quarterback struggling and playing hurt, your best receiver unable to stay healthy, and your lauded defense showing inconsistency is no way to contend. Not even in the mediocre AFC South.

The Colts have to beat some good teams to turn it around, something they've yet to manage. Sure, they have Jacksonville twice, Houston and the Jets ahead. They also face Tennessee, Buffalo, Arizona and Las Vegas.

But they do have Jonathan Taylor looking like a star running back.

Although they manage to play opponents close, these Patriots can't close. Despite Mac Jones being the most accomplished thus far of the six starting rookie quarterbacks, this is a faulty roster with issues on virtually every unit.

The Patriots head into Sunday’s game with the Jets ranked 27th in rushing offense, 26th in total offense, 24th in points per game and 19th in passing offense. They also have 11 giveaways; only Kansas City (14) and Jacksonville (12) turned over the ball more through six weeks.

Yes, the Vikings have won their last two and reversed a trend of folding in crunch time. But they could get crunched over the next month while facing Dallas, Baltimore, the Los Angeles Chargers and Green Bay following their bye.

The offense is percolating, particularly when operating with no huddle, but this defense won't remind many of the Purple People Eaters.

That the Vikings seem to have a better feel for tight situations could help them escape the danger zone.

“We have a bunch of fighters, bunch of guys that aren’t stressed out. They’re just going out there. It’s just laser-focused, and there’s not a lot of talk. We’re just staying in the huddle and waiting for that play to start to just get going,” wide receiver Adam Thielen says.

Through the Ben Roethlisberger and Mike Tomlin era in Pittsburgh, we've become accustomed to the Steelers finding ways to compete. While a rebuild in Steel City is inevitable and probably imminent, there seems to be enough talent and leadership for them to remain viable in 2021.

There also are enough holes, particularly on both lines and in the secondary, to offset further progress. And this isn't vintage Big Ben at age 39.

Injuries also have been a major factor for Pittsburgh, which returns from its bye on Halloween with a visit to the equally banged-up Browns. That game will say plenty about both teams.

If coach Kevin Stefanski, who did such a masterful job last season, is willing to stick with the throwback mode — run, run and run some more, while playing solid defense — Cleveland could ride that old-style football to another playoff berth. The Browns have a strong pass rush, too.

What they don't appear to have is the collective calm in tight spots nor the on-field leadership that can lift teams from underachievement to success. There's lots of talent on the roster, albeit many of those players are hobbled right now. There are even more question marks about the Browns.

This is one is quite simple. The NFC West is a monster, and the Seahawks already have lost to the Rams. Without Wilson, and with a defense that resembles a Legion of Doom, the Seahawks are in serious trouble of not getting to the postseason for the first time since 2017 and second since 2011.

They also don't have that home-field edge that was so enormous for the past decade, and that needs to change quickly.

“It’s going to be a long way down the schedule, there are a lot of things that will happen around the league, and we have to take care of our business,” Carroll says. “As it is always the case, postponing judgment is a powerful tool if you have it and that’s what we have to do.”

OK for now. Not for too much longer, though.