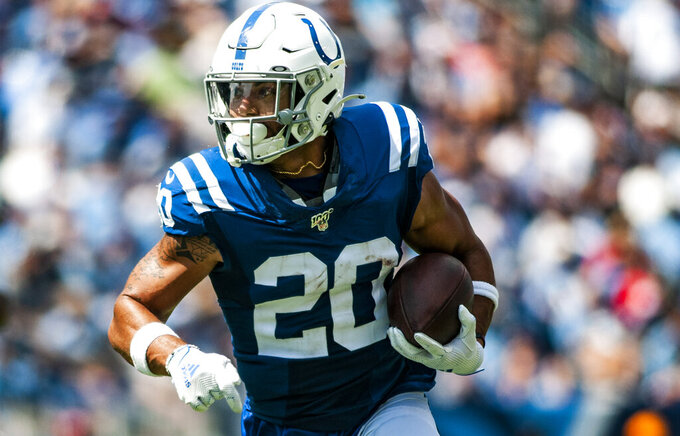 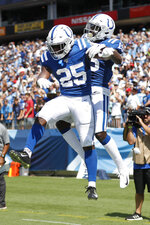 He expected the Colts to finish among the league's top-five rushing offenses. At this rate, they might even exceed Reich's expectations.

Two games into the season, the Colts have the NFL's No. 2 ground game, the No. 3 rusher and a play caller committed to sticking with the game plan under any circumstances. It's making an impact.

"The second half we came out more physical and downhill, trying to move the ball," Jordan Wilkins said after rushing for a career-high 82 yards on five carries in Sunday's victory at Tennessee. "Everybody knows the strength of our offense is the offensive line and they kind of took it upon themselves."

No, this is not the sometimes pass-happy Colts (1-1) team fans remember from the Peyton Manning and Andrew Luck eras. Heck, it hardly resembles the team that started last season 1-5.

When Reich arrived last year, he installed a new-look offense full of the trendy run-pass options that have become a league-wide rage. But after watching the Colts allow just 11 sacks over their final 12 games including two playoff games, Reich figured the old-school, smash-mouth philosophy might help Indy take the next step.

So long before Luck's surprise retirement announcement, Reich planned to give Marlon Mack and the other running backs more touches.

The result: Indy rushed for 203 yards, led by Mack's career-high 174, in a season-opening loss to the Chargers, and 34 times for 167 yards against the Titans. And the play that might typify just how much Reich has bought into the run-first approach came on Jacoby Brissett's quarterback sneak on fourth-and-1 from the Colts 35-yard line with 2:23 left and Indy clinging to a two-point lead.

"I'm not trying to sound like a tough guy, but it really didn't cross my mind," he said. "We have a lot of confidence in our offensive line. There was no other thought."

Brissett's 1-yard gain forced the Titans to burn their final two timeouts and left them with only 67 seconds to move into position for a potentially winning field goal when they did get the ball. Tennessee drove to the Colts 45 turning it over on downs with 13 seconds left.

And as the players' confidence in the ground game continues to build, they're more convinced than ever they could be built for bigger and better things than they achieved last season.

"We've got some tough guys. We actually have a team in every phase of the game," said Brissett, Luck's successor. "There's no quit in this group. You saw that last week, this week, and, you know, we practice hard, we prepare hard for 60-minute games. We go over situations like this every day."

The pass rush. Indy bet big that free agent defensive end Justin Houston could help improve one of last season's weaknesses. He has. But the Colts are finding other ways to pressure quarterbacks. They're tied for second in the NFL with eight sacks after producing 38 in 2018.

Placekicking. For most of Adam Vinatieri's career, he's been money. This season, he's already missed five kicks — two field goals and three extra points — costing the Colts seven points in the overtime loss to the Chargers and two more points in Sunday's victory.

DT Denico Autry. The six-year veteran has thrived since moving inside. He's made 9½ sacks in his last 11 games, with two Sunday.

Vinatieri. At age 46, speculation has been swirling about the NFL's career scoring leader, with many wondering if he may retire. Reich said Vinatieri would take reporters' questions Tuesday.

CB Pierre Desir and LB Darius Leonard. Indy's top cornerback left Sunday's game in the third quarter with a knee injury and did not return. Reich said Desir would continue to get evaluated this week. Leonard, Reich said, developed concussion-like symptoms following the game and has been put in the concussion protocol. Leonard led the league in tackles last season and was an All-Pro.

Eight. Indy overcame eight penalties Sunday after being called for only three against the Chargers.

Indianapolis needs to give Brissett enough time to make throws down the field. He's been sacked five times in two games and was under duress much of Sunday, forcing him to throw shorter, quicker passes instead of being able to take advantage of the Colts' playmaking deep threats.