On Football: NFL QB quandaries from coast to coast 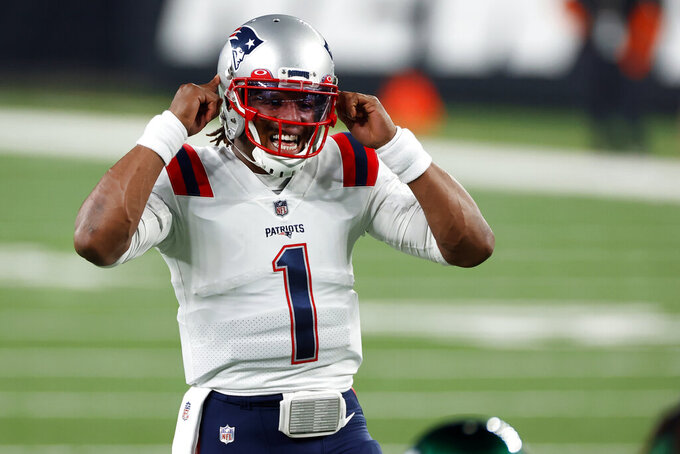 FILE - In this Nov. 9, 2020, file photo, New England Patriots quarterback Cam Newton (1) gestures at the line of scrimmage during an NFL football game against the New York Jets in East Rutherford, N.J. The college quarterbacks class is shaping up nicely, just in time to perhaps rescue some NFL teams from themselves. Those guys salivating about such prospects work in the personnel departments of the Jets, Jaguars and Bears. Maybe for the Lions, Patriots, Falcons, Saints and 49ers. (AP Photo/Adam Hunger, File)

The college quarterbacks class is shaping up nicely, just in time to perhaps rescue some NFL teams from themselves.

Right at the top are Clemson's Trevor Lawrence, Ohio State's Justin Fields and Florida's Kyle Trask, depending on who (likely all) become eligible for the 2021 draft. BYU's Zach Wilson and North Dakota State's Trey Lance are highly rated, too.

Those guys salivating about such prospects work in the personnel departments of the Jets, Jaguars and Bears. Maybe also for the Lions, Patriots, Falcons, Saints and 49ers.

Each of those clubs is in a quarterback quandary, though Atlanta with Matt Ryan need not be in any hurry. Same for the 49ers if Jimmy Garoppolo could stay healthy. And who knows, maybe Taysom Hill has the goods to step in full time when Drew Brees almost certainly heads to the broadcast booth.

“It is not just whether you need a quarterback,” says Rich Gannon, the 2002 league MVP, current CBS Sports analyst, and one of the best QB talent evaluators around. “Is the quarterback ready? A team may say, 'We think the kid at Clemson will come in and be our Week 1 starter, we will get him all the reps and get him ready.' But is the team ready for a kid quarterback? You never really know.”

What we do know, as do Gannon and former NFL signal caller Jim Miller, now with SiriusXM NFL Radio and Westwood One, is that the quarterback marketplace will be heavily populated with shoppers in the offseason.

This winless bunch has the biggest dilemma. It selected Sam Darnold third overall in the 2018 draft. When he has been healthy and had some help around him, he has looked decent — though decent is hardly what you want from supposedly the franchise's future. The Jets really need to see more of Darnold, but they seem to have a better shot at winning a game with current starter Joe Flacco while Darnold heals from a right shoulder issue.

With coach Adam Gase almost certainly on his way out, he might be better off sticking with the veteran in hopes of avoiding 0-16. Instead, Darnold is expected to be back under center Sunday after recovering from a shoulder injury.

“It is a dilemma,” Miller notes. “I would think they have to go back to Darnold. The offense looks better, but they finally have gotten their weapons back with the wide receivers healthy. So yes, it has looked better with Flacco. I would like to see Sam Darnold on the field with those guys.”

“The thing about Darnold is that he has never played a full season. You have got that to deal with; is he a guy who can make it through an entire season?

“The other part is what kind of a player is he? There has been a coaching change in his career, they have got a situation with an offense that lacks a lot of talent, to be honest. They have one Pro Bowl player, and that's Frank Gore, a 37-year-old running back.”

Both believe New York will select a quarterback to start its draft and don't see Darnold being kept as a backup even though in his fourth pro season his salary would be very workable.

“He needs to go somewhere and be trained,” Gannon says. “Unfortunately, you have to go to the back of the line and earn your stripes again. It happened to me. Go where there's an older guy and be a young quarterback they will try to bring along who has had some issues with inconsistency.”

Even before Nick Foles replaced Mitchell Trubisky, it was clear the Bears were souring on the second overall pick in the 2017 draft. Trubisky was benched, Foles played OK, then Trubisky got hurt. And last week, so did Foles.

“Obviously, there's a lot of talk they should turn back to Trubisky,” Miller adds. “I don’t see how they can; he would be playing for his next contract, but it would be for another team. Once they pulled that plug on Trubisky, I don’t see any way they can turn back.”

But with five wins already, Chicago won't pick all that early in April.

“I think they need to absolutely address it in draft, and I see guys in college climbing the ranks,” Miller says. “I think there will be a possibility of getting a guy.”

“The impact Tom Brady is having in Tampa has to make you wonder what could have been,” Gannon says. "Look at how quickly they have fallen. They are just not the same team. It's hard to replace that type of production they got from Brady, the type of person when he was in the building. He made everyone better and more accountable, like when Peyton (Manning) went to Denver.

“You can tell the quarterback (Cam Newton) is out of sorts and they are doing all they can to build a plan around what he is comfortable with. It's so different from what they have done in the past.”

So is Newton in New England's future?"

"I think Bill will try to draft and groom," Miller says of Patriots coach Bill Belichick. "They have Jarrett Stidham, they seem to like him, he was competing for the starting job until the injury in training camp.

“Or could this be a landing spot for one of those veteran quarterbacks who might be moving? I think this would be a one and done with Cam.”

With changes in the Motor City, it's no long shot that Matthew Stafford could be elsewhere in 2021, with a youngster behind center. The Lions have gone nowhere despite having a solid QB, but the gutsy, oft-injured Stafford will be 33 next season.

“I think they have to blow it up, go the way of the Dolphins,” Miller explains. “I think Matthew has been a good soldier but not won anything. I think an overhaul blowup is coming and the Patriots could look at Matthew, who is going to have a lot of options.”

There doesn't seem to be any question here: The Jaguars have no true incumbent or high draftee they are committed to. They appear headed for top five, perhaps top-two selection. What else could that be but a QB?