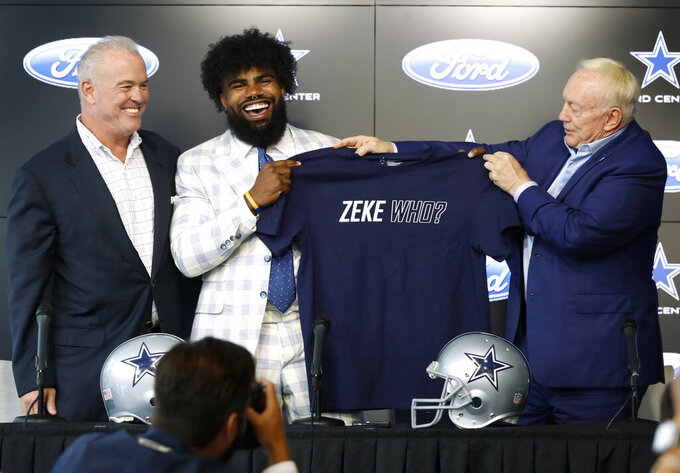 From left to right, Dallas Cowboys director of player personnel Stephen Jones watches as running back Ezekiel Elliott is presented with a shirt by team owner Jerry Jones, right, during a news conference regarding Elliott's new contract at the NFL football team's practice facility in Frisco, Texas, Thursday, Sept. 5, 2019. Elliott's agreement on a new contract ended a holdout that covered all of training camp and the preseason and came four days before the season opener at home against the New York Giants. (AP Photo/Tony Gutierrez) 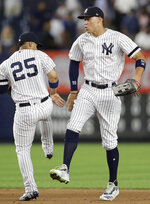 While he isn't a die-hard baseball fan, Saquon Barkley is thinking about getting some more New York Yankees apparel.

They were always his team growing up, and the bond got a little tighter for the 22-year-old Barkley over the past 24 hours when four Yankees donned his No. 26 jersey a day before the baseball team conducted a fantasy NFL draft.

It happened Wednesday night before the Yankees headed to Boston for a weekend series. After their game with Texas, Domingo Germán, Gleyber Torres, Gio Urshela and Cory Gearrin donned Barkley's jersey to show their favorite NFL player.

"It's awesome just to see the New York love," Barkley said Thursday, three days before the season opener in Dallas against the Cowboys. "Even though we all play different sports we have the same appreciation for each other. Even though I am not a crazy baseball fan growing up, I have always been a Yankees fan. Everybody's been a Yankees fan and has to be, especially if you are from the New York-Pennsylvania area, where I am from."

It's not surprising people support Barkley. He was the NFL offensive rookie of the year last season, rushing for 1,307 yards and 11 touchdowns and catching 91 passes for 721 yards and four TDs. He finished with a league-best 2,028 yards from scrimmage.

Those are super fantasy numbers.

With a seemingly better offensive line following the addition of Kevin Zeitler at right guard and Mike Remmers at right tackle, the expectations for Barkley are over the moon.

Sunday's matchup against the Cowboys should be interesting because it pits the top two NFL rushers in 2018, Ezekiel Elliott of the Cowboys and Barkley, the No. 2 pick overall in last year's draft.

Elliott won the rushing title with 1,434 yards, sitting out the final game of the season. He finished 27 yards behind Barkley in the race for most yards from scrimmage, so he probably would have won that had he played.

Barkley is happy Elliott ended his holdout this week and got a new $90 million contract. But it's not going to motivate him. He said being held out of the preseason to keep him fresh, has his juices flowing.

Barkley believes he is the best running back in the league and he would not be surprised if either Elliott or Todd Gurley of the Rams felt the same way.

In two games against the Cowboys last season, Barkley rushed for a season-low 28 yards in the second game of the season and 109 in the season finale. He also caught 18 passes, including a team-record 14 in the September contest. He scored once.

"He's a guy, I think we'll just have a smarter player, knowing the reads, the runs, get him involved in the pass game, just doing everything a little bit smoother," Manning said. "He works extremely hard, so I think he'll be primed to go out there."

NOTES: Remmers, who missed practice on Wednesday with an illness/back problem, returned on limited basis Thursday. Coach Pat Shurmur expects him to play but either Chad Slade or Nick Gates would be ready to fill in. ... Defensive coordinator James Bettcher would not say whether rookie DeAndre Baker or Antonio Hamilton would start opposite Janoris Jenkins at cornerback. Both have missed time in camp so they might split time. ... Special teams coordinator Thomas McGaughey says S Jabrill Peppers probably will return punts, while Cody Latimer and Corey Ballentine handle kickoffs. ... TE Garrett Dickerson (quad) and WR Darius Slayton (hamstring) sat out second straight day. ... Rookie DB Julian Love switched from No. 37 to 24 after the preseason. "I wasn't feeling 37," the fourth-round draft choice said.