Gregg Williams: Some will be 'shocked' by Jets' pass rushers 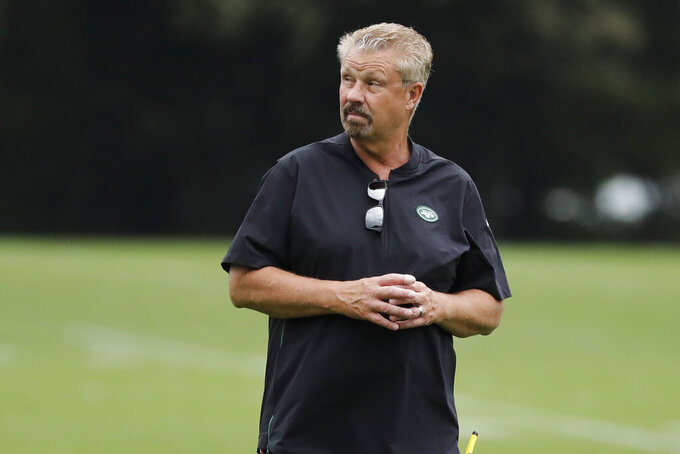 FLORHAM PARK, N.J. (AP) — Gregg Williams is fired up about the guys on his defense whose job is to make quarterbacks downright uncomfortable.

So, all that talk the past few months about the perceived lack of an elite pass rusher on the New York Jets? The ever-confident defensive coordinator insists that you — and anyone else around the NFL taking his squad lightly — can take the disrespect elsewhere.

"I think there's a lot of people here that people are going to be shocked about by the time the season's over," Williams said Friday. "(We have) a lot better people here than everybody keeps crediting. You haven't heard me say one thing about needs in that area.

"You haven't heard me say one thing. I'm not worried about that area."

It might not exactly be the second coming of the "New York Sack Exchange" with Joe Klecko, Mark Gastineau, Marty Lyons and Abdul Salaam routinely planting QBs into the turf in the 1980s. But, Williams thinks he has enough talented players to give teams big-time fits on a regular basis.

That hasn't been the case in recent seasons, though. The Jets have ranked in the top 10 in the NFL in total sacks just twice in the last 10 years: sixth with 45 in 2014, Rex Ryan's last year as coach; and eighth with 40 in 2010, Ryan's second season.

New York also hasn't had a player with double-digit sacks since Muhammad Wilkerson had 12 in 2015.

Big things are expected, though, from the likes of defensive end Henry Anderson and outside linebacker Jordan Jenkins, who each set career highs by tying for the team lead last season with seven sacks. Outside linebackers Frankie Luvu, Harvey Langi and Tarell Basham are lesser-known players who appear ready to make an impact, particularly with Brandon Copeland — who had five sacks last season — suspended for the first four games for violating the NFL's policy on performance enhancers.

There's also defensive lineman Leonard Williams, who had five sacks last season but hasn't fully lived up to the lofty expectations of being the No. 6 overall pick in 2015t. He has just 17 sacks in his first four NFL seasons and enters a contract year with an uncertain future with the franchise.

"I mean, every year you want to play your best year," Leonard Williams said. "It's not like the other years before I was like, 'Oh, this isn't a big year, so let me chill.' Every year, you expect to have a big year that year. I've never tried to take a back seat or the backburner or anything like that. I'm looking at this year the same way."

While the sack numbers might not be there, Williams has affected games in ways that don't necessarily show up on the regular stats sheets. He has led the Jets in quarterback hits in each of his NFL season. Williams' 85 hits since 2015 are tied for the fifth-most among AFC players in that span, according to Radar360.

Defensive lineman Quinnen Williams, the No. 3 overall pick in April, also will be counted on by the Jets to play a big role as a rookie.

"He has not been slowed down by anything intellectually," Gregg Williams said. "He's a sharp young man and I don't worry about him at all."

The defensive coordinator has required that all of his players know how to play at least two positions on the field. Some, such as Langi, have shown they can play at three spots on the defense.

That gives Gregg Williams lots of flexibility, and allows players to rotate in and out of the lineup while keeping them fresh — and opposing offenses off balance.

"Our guys here enjoy the aggressive style and not only schematically, that's just one thing, but the technique within the schemes," Gregg Williams said. "We're not a reactionary defense, we're an attacking (defense). Whether it be just 1-on-1 or 11-on-11, whatever. Those are the things we want our guys to do. We want them to play hard and fast and keep on playing and when we say faster — tougher, harder for longer than everybody we play against.

"They've done a great job of adapting to that here."

NOTES: WR Robby Anderson (calf), CB Trumaine Johnson (hamstring) and WR/PR Braxton Berrios (hamstring) were all listed as questionable for the opener against Buffalo, but coach Adam Gase expects all to play. ... Gregg Williams on players saying they enjoy his coaching style: "I say what I mean, I mean what I say. You don't like fake, phony people. I'm not fake and phony. They understand that I came to grips many years ago that I got a place on Earth to mentor young men, especially young men who don't get things correctly and convince them to take ownership and do it. We're in this together. It's not me versus them, it's us, at all times. It's 'we' at all times."