Henry insists foot is healthy, open to extension from Titans 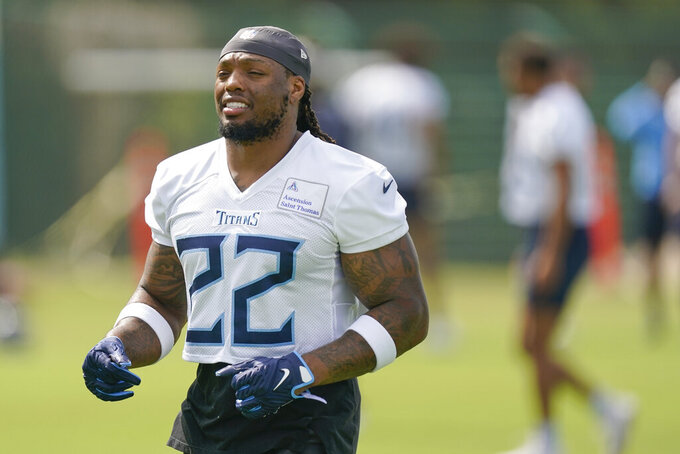 NASHVILLE, Tenn. (AP) — Tennessee running back Derrick Henry has let his hair down this offseason, prompting lots of questions about the new 'do.

Not nearly as many as the current state of his right foot.

A broken right foot cost Henry nine games last season. He returned for the Titans' playoff loss to Cincinnati and ran 20 times for 62 yards and one touchdown. The man who ran for 2,027 yards in 2020 and was leading the NFL in rushing when he broke a bone in his right foot last October patiently tried his best to make clear that's not an issue.

Henry hadn't talked to reporters since the divisional loss in January. He was among several veterans at the Titans' mandatory minicamp Tuesday. Outside linebackers Harold Landry and Bud Dupree, right guard Nate Davis, inside linebacker Zach Cunningham all were on the field.

Tennessee finished with the AFC's No. 1 seed and was fifth in the NFL, averaging 141.4 yards rushing without Henry for half the season.

The 6-foot-3, 247-pound Henry is the man who makes Tennessee's offense work at its best. With Henry sidelined, the Titans finished 15th in the NFL, averaging 24.6 points a game — a big drop from 2020 when they ranked fourth with 30.7 points a game.

This was the third straight year that Henry spent the voluntary portion of the NFL's offseason program working out on his own after enjoying his approach in 2020 during the pandemic. He works out two or three times a day, taking off some Sundays to take his daughter out or when traveling.

“I just felt like if it ain’t broke, don’t fix it,” Henry said. "And I’ll continue to do those things. I’ll communicate with the coaches and they knew what was going on and I talk to them every now and then, so that was good.”

Henry said he has been working with a physical therapist on a lot of footwork, making sure he finds his toes and balances on his foot. He's been running hills, which has been documented with videos on social media, and doing all the things to make sure he's ready when the Titans report for training camp July 26.

Missing nine weeks with the first real injury of his football career made Henry appreciate the game even more along with missing being around his teammates.

“With a bone, you have to let it heal on its own,” Henry said. “It takes time and things like that. You just want to make sure you're taking care of your body, doing everything possible so that when the time comes again, you're prepared and ready.”

He's also eager to prove anyone doubting he can play at his usual level wrong.

“The doubters, whatever they want to be, I’m definitely motivated,” Henry said. “I’m ready to go. So we’re going to see.”

Even with Henry missing nine games, the 2015 Heisman Trophy winner and 2020 AP Offensive Player of the Year still finished ninth in the NFL with 937 yards rushing. He tied quarterback Jalen Hurts of Philadelphia and running back Ezekiel Elliott of Dallas for sixth with 10 rushing touchdowns.

The Titans would be open to extending Henry's contract, according to a recent report. Henry signed a four-year deal in July 2020 after being franchise tagged, and he is scheduled to make $12 million this season and $12.5 million in 2023.

“It’s always good to get a promotion at your job ...," Henry said when asked about a possible extension. “I’m just trying to work through that. I’m currently still under contract. If that’s what the future holds, that’d be great.”