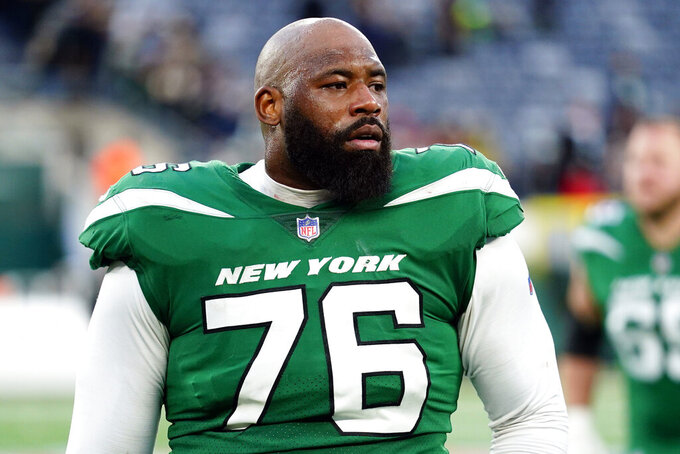 FILE - New York Jets offensive lineman George Fant looks on after an NFL football game against the New Orleans Saints, Dec. 12, 2021, in East Rutherford, N.J. The Jets activated Fant from the injured reserve list Saturday, Dec. 3, 2022, in time for their game against the Vikings in Minnesota on Sunday. (AP Photo/Matt Rourke, File)

The New York Jets activated offensive tackle George Fant from the injured reserve list Saturday, in time for their game against the Vikings in Minnesota on Sunday.

Fant missed the last eight games while dealing with a knee injury. He started the first three games this season at left tackle while Duane Brown was injured before being sidelined himself.

Brown has started the last seven games at left tackle since being activated from IR with a shoulder injury and is likely to remain there. Fant, who entered the season projected as the team's right tackle after the Jets signed Brown, could play there Sunday.

Cedric Ogbuehi, the starter on the right side the last four weeks, was placed on injured reserve after being listed as doubtful with a groin injury and an illness. Rookie Max Mitchell started the first four games at right tackle before injuring a knee. He was activated from IR last week and replaced Ogbuehi after he was hurt in the win against Chicago.

Coach Robert Saleh had said the team would monitor Fant throughout the week before making a decision whether to activate him.

“George is excited,” Saleh said Wednesday. “I love his attitude right now. He feels good, he’s saying all the right things, he’s preparing the right way and so, excited to see how he improves this week from last week.”