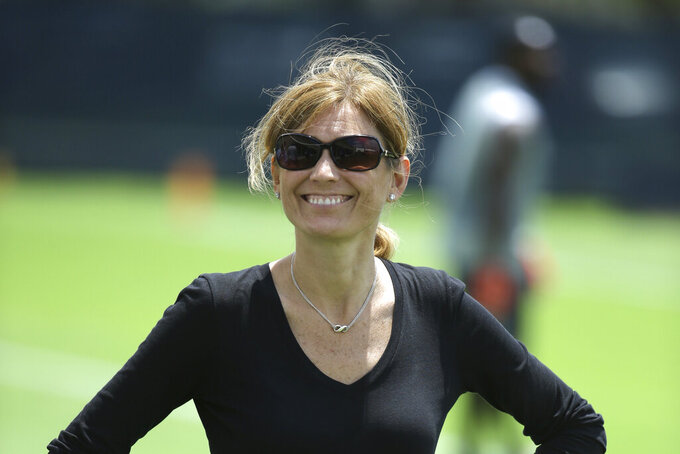 FILE - Then-Miami Dolphins Executive Vice President of Football Administration Dawn Aponte stands on the field after a Miami Dolphins voluntary veterans football minicamp in Davie, Fla., April 26, 2016. Even though the NFL attempted to enhance opportunities for minority candidates to become head coaches in a league whose players are 70% black, there was a disconnect. Same thing for front office positions, although more improvement had been seen in recent years in that area. (AP Photo/Lynne Sladky, File)

Even though the NFL attempted to enhance opportunities for minority candidates to become head coaches in a league whose players are 70% Black, there was a disconnect. Same thing for front office positions, although more improvement had been seen in recent years in that area.

Those diverse prospects in many cases were strangers to the people making the hiring decisions. And when the number of minority head coaches on the 32 teams stagnated — it is six for 2022, including three Black men, one biracial, one Hispanic and one Lebanese — the NFL sought a different path for potential coaches and general managers.

It has come up with the inaugural Coach and Front Office Accelerator that will take place next Monday and Tuesday at owners meetings in Atlanta.

“I think the accelerator is some of the most important work the league and our (diversity) committee will do all year because the potential of the program is exponential,” says Falcons owner Arthur Blank. “It’s an unprecedented opportunity for emerging leaders, owners and team leadership to get to know each other better over these two days, and the relationships formed in this setting will be integral to future hiring cycles.”

People in the coaching and front office pipeline noted how often their first encounter with an owner or team executive came when they were being considered for a job. That made for some awkward situations — and, probably, some ill-informed hiring decisions.

At the scouting combine in Indianapolis in late winter, league executives discussed the issues with a select number of coaches and general managers who were part of the hiring cycle — some of whom got the jobs and some who did not.

“One of the things clearly stated with passion was, 'We shouldn’t be in a scenario where the first time I am meeting a club owner is at that interview,'” notes Jonathan Beane, the NFL's senior vice president, chief diversity and inclusion officer. “There is no relationship there, the two individuals don’t know each other well. That makes it very difficult.

"How can we ensure that not happen often?"

The answer could be the acceleration program for which one coaching and one general manager candidate from each of the 32 teams has been selected to attend. Those people range from a former head coach, Vance Joseph, who was in charge of the Broncos from 2017-18, went 11-21, and now is Cardinals defensive coordinator, and Chiefs offensive coordinator Eric Bieniemy — a frequent consideration for head coaching vacancies — to such position coaches as the Jets' Ron Middleton (tight ends), the Bills' Eric Washington (defensive line) and the Cowboys' Joe Whitt Jr (secondary/defensive passing game coordinator).

To avoid tampering, guidelines will be in place for these networking sessions, with no job interviewing or hiring allowed. This is more of a “getting to know you” initiative that should help both candidates and owners in the future.

The goals are for the participants to develop relationships with a number of different owners; get a deeper understanding of the business of football at the club and league levels; and recognizing what is the next thing the candidates need to do to become a general manager or coach or football executive.

“We have never had a development program where the participants will have access to every owner and have chance to network with them in an informal and formal way,” Beane says.

A key component is the variation of resumes, something the diversity committee and NFL Commissioner Roger Goodell encouraged in the development of the acceleration program.

“This is why this program is so powerful,” Beane says. “It doesn’t matter whether you have been head coach or a defensive coordinator or an offensive coordinator for over a decade, or still an up-and-comer emerging talent. This is going to be beneficial for you because of the relationships you build.”