Playoff hopes on line for Hill, Saints against Ryan, Falcons 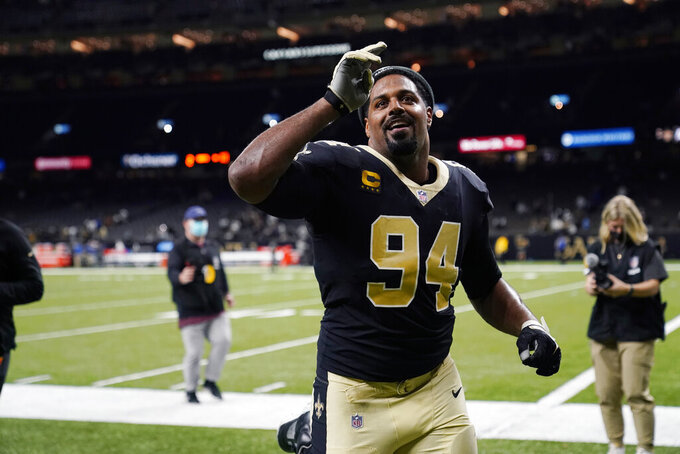 BETTING LINE: Saints by 4½, according to FanDuel SportsBook.

TURNOVER DIFFERENTIAL: Saints plus-4; Falcons minus-3.

SAINTS PLAYER TO WATCH: DE Cameron Jordan has 7 ½ sacks during his past three games. He was NFC Defensive Player of the Week twice in those three weeks, including this week after getting 11 tackles with 3 ½ sacks last week against Carolina. He can become the first player since Tampa Bay's Simeon Rice in 2002 to have at least two sacks in four consecutive games.

FALCONS PLAYER TO WATCH: If TE Kyle Pitts is able to return from a hamstring injury which limited him to two snaps in the second half last week, he could pass Mike Ditka's record for most receiving yards by a rookie tight end. Pitts has 1,018 yards, 49 shy of Ditka's 1,067 in 14 games for Chicago in 1961.

KEY MATCHUP: The Saints’ defensive front, led by Jordan and DE Marcus Davenport, against Atlanta's offensive line. The Saints are tied for seventh in the NFL with 43 sacks. The Falcons have allowed 83 quarterback pressures, the most in the league, and 37 sacks. Matt Ryan was sacked five times last week.

SERIES NOTES: The Falcons are looking for their first sweep of season series since 2016. The Saints had won three consecutive games against Atlanta before losing at home this season. Since Sean Payton became coach in 2006, the Saints have won 21 of 31 meetings, including six of the last eight.

STATS AND STUFF: The Saints need to beat the Falcons and have the Rams beat the San Francisco 49ers to make the playoffs for the fifth consecutive season. The Falcons were eliminated from playoff contention last week. ... QB Taysom Hill passed for 222 yards and TD without an interception and led New Orleans with 45 yards rushing last week. ... Hill is 6-2 in eight career starts at quarterback and has rushed for at least 30 yards in every start. ... Hill passed for 232 yards and two TDs to go with had 83 yards rushing at Atlanta on Dec. 6, 2020. ... RB Alvin Kamara had five catches and 100 scrimmage yards (68 receiving, 32 rushing) with his 20th-career TD receiving last week. Kamara has 35 games with 100-plus scrimmage yards since 2017. ... Kamara is one of two players in NFL history, along with former San Francisco running back Roger Craig, with 4,000-plus yards rushing and 3,000-plus yards receiving in his first five seasons. ... WR Marquez Callaway led New Orleans with six receptions for 97 yards last week. ... Falcons LB Foye Oluokun has interceptions in consecutive games. He leads the NFL with 179 tackles. ... Pitts has a team-leading 66 receptions. Keith Jackson and Jeremy Shockey are only other rookie tight ends with at least 65 catches. ... Ryan needs to pass for 248 yards for his 11th career season with at least 4,000 yards. ... RB Cordarrelle Patterson has set career highs with 607 yards rushing, 1,154 scrimmage yards, six rushing touchdowns, five receiving touchdowns and 547 yards receiving.