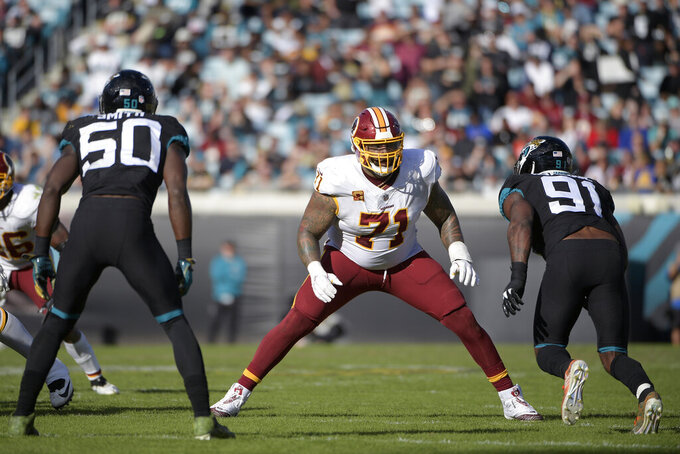 FILE - In this Dec. 16, 2018, file photo, Washington Redskins offensive tackle Trent Williams (71) sets up to block in front of Jacksonville Jaguars defensive end Yannick Ngakoue (91) during the second half of an NFL football game in Jacksonville, Fla. Browns general manager John Dorsey acknowledged having “a few conversations” lately with Redskins GM Bruce Allen. With the trading deadline approaching, Dorsey could be tempted to improve Cleveland’s offensive line and the Redskins are at an impasse with seven-time Pro Bowl left tackle Trent Williams, who hasn’t played this season due to a contract holdout. As he finished his news conference Wednesday, Oct. 16, 2019, Dorsey was asked if he has asked Allen about trading Williams.“It takes two to tango,” Dorsey said as he left the podium.(AP Photo/Phelan M. Ebenhack, File)

Dorsey said he's had "a few conversations" lately with Washington Redskins President Bruce Allen and hinted one of the topics discussed has been a trade for star left tackle Trent Williams.

Dorsey, who maintains the Browns can still accomplish all their goals despite a 2-4 start, was asked if Allen might trade his left tackle, meaning Williams. "It takes two to tango," Dorsey said Wednesday as he left the podium.

Dorsey's comment could be seen as a way of putting pressure on Allen to deal Williams, a seven-time Pro Bowler who isn't playing while embroiled in a messy contract dispute with the Redskins. Williams also differed with the team's medical staff on its handling of a growth on his head.

Last week, Allen insisted he has no plans of moving the disgruntled 31-year-old Williams.

But that's not likely to dissuade Dorsey, who heard similar things from the New York Giants about star wide receiver Odell Beckham Jr. before putting together the right package to bring the gifted playmaker to Cleveland in March.

With the Oct. 29 trade deadline nearing, talks between the Browns and Redskins could intensify. Or fizzle.

Either way, Dorsey plans to spend the remainder of Cleveland's bye week looking for ways to improve a team that entered the season with playoff hopes but has underperformed.

"We will do what is best for the Cleveland Browns organization," he said. "We will do extensive research. We will make a million phone calls. If we think we can improve a position, regardless of what that position is, we will go about it if we think it is the right fit for the Cleveland Browns. ... Whatever happens, happens. If nothing happens, you move on and go to the next project."

The Browns (2-4) are using their time off to assess all areas of their team, including an offensive line Dorsey feels needs to be "more consistent." He used the same words to describe the play of starting tackles Greg Robinson and Chris Hubbard.

Dorsey has overhauled Cleveland's roster since he was hired as GM late in the team's winless 2017 season. He has made numerous trades, drafted quarterback Baker Mayfield first overall and plugged holes in the secondary and across both lines.

However, he hasn't found a long-term solution at left tackle since 10-time Pro Bowler Joe Thomas retired after the 2017 season and careers were cut short by injury.

Williams could fill that critical spot for a few years, protecting Mayfield's blindside and opening holes for running back Nick Chubb.

Williams is due nearly $25 million over the next two seasons, the final years on a five-year, $66 million extension he signed in 2015.

The Redskins would likely want a first-round pick — and more — for Williams, and Dorsey said the Browns, who have roughly $33 million in salary-cap space, are positioned to add another high-priced player if necessary.

"We still have flexibility to do a lot of different things," he said.

Cleveland's offensive line has had some uneven performances, but the unit is coming off a solid game against Seattle. Mayfield wasn't sacked, and Chubb rushed for 122 yards and two touchdowns.

There could be other changes up front during the bye as Wyatt Teller, acquired in August from Buffalo, could move into Eric Kush's spot at right guard.

Center JC Tretter said the bye week gives everyone a chance to reflect and make adjustments.

"We've done some really good things on the offensive line, but there is clearly room to improve and clearly room to get better both as a collective unit and as individuals," he said. "I think all positions have taken that to heart, understanding that we need to come back raring to go, ready to go and with the mindset of what we need to accomplish in the final weeks of the season."

NOTES: QB Baker Mayfield didn't practice as he continues to recover from a hip injury suffered on a hit in Sunday's game. He's expected to be ready to face New England on Oct. 27. ... Dorsey stressed that he's pleased with the job first-year coach Freddie Kitchens has done and that he's not panicked by the team's slow start. "Nobody in this organization is happy about 2-4," he said. "That's real. We have 10 games left in the season. ... The positive here is that we have five home games. We have five divisional games. There's a lot of football to be played here. I know from personal experiences that I've been on teams that have had worse starts than this and guess what? They played really good at the back end of the season."