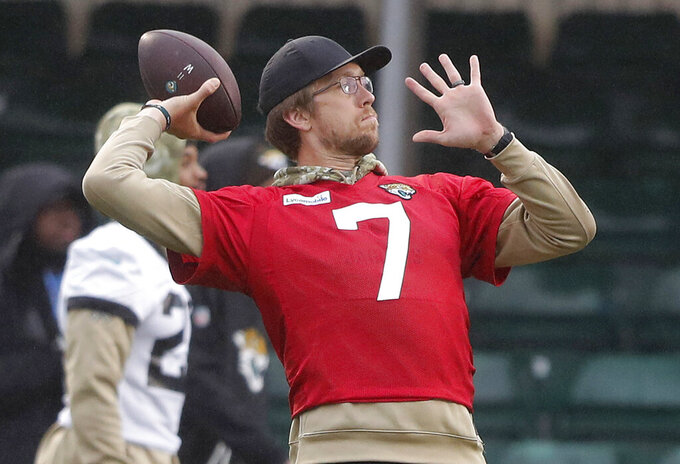 Now that we're fully entrenched in the double-digit weeks of the fantasy football season, owners can officially consider this the stretch run.

Teams are doing whatever they can to make it work, pushing through the bye weeks with the hopes of a playoff berth. It's as difficult as ever. Players keep getting hurt and, not to mention, the four teams on byes in Week 11 all have really great players (the Packers, Titans, Giants, Seahawks).

As usual, let's take a look at players we can stream at quarterback and tight end as well as players who might have lasting value at running back and wide receivers.

Sam Darnold at WAS

Coming off the Jaguars bye week, Nick Foles will once again take over as the starting quarterback of the Jacksonville Jaguars. While Foles may be known more so for his postseason play, he's in a good spot with this Jaguars team. He's got a great fantasy playoff schedule and a strong group of pass catchers.

The Colts are more of a mediocre matchup in Week 11 but after that, the schedule has Foles owners salivating. It starts in Week 13 with Foles going up against the Bucs followed by the Chargers, Raiders, and Falcons in Weeks 14-16. Consider that Gardner Minshew, a sixth-round rookie, is currently the QB15 in fantasy points per game. With more experience, Foles should be able to take advantage with this group of pass catchers that includes DJ Chark, Dede Westbrook, Chris Conley, and Leonard Fournette.

If you need more of an immediate impact, look to Kyle Allen or Sam Darnold as both have great matchups in Week 11. Allen takes on the Falcons, a defense that has struggled. Yes, the Falcons limited Drew Brees in Week 10, but they allowed multiple touchdown passes in every game from Weeks 3 to 8. They're allowing the third-most fantasy points to opposing quarterbacks.

Next up we have Darnold who is coming off a game with one passing touchdown and one rushing touchdown, finishing as a top-10 quarterback in Week 10. Washington's defense has played better recently but we can't forget that they've allowed three passing touchdowns in a game on four different occasions this season. Look for Darnold to continue the success he had in Week 10.

Devonta Freeman is reportedly dealing with a foot sprain and could miss a few weeks. Considering the Atlanta Falcons are 2-7, there is a distinct possibility Freeman could be shut down for the second year in a row. Considering backup Ito Smith was placed on injured reserve this past weekend, that leaves Brian Hill as the starter. With Freeman hurt for most of Week 10, Hill played 51 percent of the snaps, carrying the ball 20 times for 61 yards. Hill has the size to handle a big workload and proved he can be a workhorse back during his final season at the University of Wyoming. Also consider that the Falcons face the Panthers in Week 11, a defense allowing 5.05 yards per carry to running backs this season. In fact, they just allowed Aaron Jones to score three times in Week 10. Hill could be in for another 15 to 20 touches in that game, which makes him a strong flex option.

Another injury took place as Ty Johnson of the Detroit Lions was diagnosed with a concussion. It seems very unlikely he'll be good to go in Week 11 against the Dallas Cowboys. As a result, J.D. McKissic will have to pick up the slack. With Johnson going out, McKissic handled a season-high 70 percent of the snaps for the Lions in Week 10, totaling 55 yards on 16 touches. It's the usage in the pass game that should really get fantasy owners excited as McKissic has at least three receptions in each of the past three games. He also had a season-high seven targets this past week against the Bears. The Cowboys are decent against the run but McKissic's targets should be enough for him to be flex-worthy in PPR leagues.

Kalen Ballage had 82 percent of the snaps for the Dolphins with 24 touches against the Colts. Ballage will face the Buffalo Bills in Week 11, a defense that just allowed Nick Chubb and Kareem Hunt to combine for 195 total yards (including nine receptions). Ballage will be a low-end flex and bye-week replacement in that matchup.

Demaryius Thomas at WAS

It's not often one of the top waiver wire adds is heading into a bye week but that's the case when it comes to Darius Slayton of the New York Giants. With Evan Engram and Sterling Shepard sidelined in Week 10, Slayton took full advantage of his opportunity while playing 93 percent of the snaps. Slayton finished with 10 receptions for 121 yards and two touchdowns, finishing as the WR2 overall in fantasy football this past week. The Giants often end up in shootouts because of their struggling defense. That lends itself to Slayton having value even through the bye week.

Let's stay in the NFC East as Randall Cobb also made the most of his opportunity in Week 10. He dominated the Vikings secondary, finishing with six catches for 106 yards and a touchdown. This is now back-to-back weeks where Cobb has seen eight targets from Dak Prescott. Amari Cooper is clearly the team's top pass catcher, but Cobb may be on an even playing field with Michael Gallup at the moment. The Cowboys face the Lions in Week 11, a defense that has allowed seven touchdowns to wide receivers over their past five games. Given Cobb's role increase and the matchup, he should be considered as an add this week.

Demaryius Thomas doesn't have a touchdown this season, but he's steadily had a role in the offense for the Jets. Sam Darnold has relied more on the short and intermediate throws this season. That's why the likes of Jamison Crowder and Thomas have been more useful than Robby Anderson. Since Darnold returned in Week 6, Thomas is tied for second on the team with 18 percent of their target share. He's got seven more receptions and 48 more yards than Anderson during that span. Darnold could fare well against Washington in Week 11, we should like his pass catchers as well. That's where Thomas comes in.

James Washington finished with six receptions for 90 yards and a touchdown, all while only playing 50 percent of the snaps. Washington played against the Rams secondary. Washington played four years with Mason Rudolph at Oklahoma State, so their rapport could be developing at the NFL level.

OJ Howard vs. NO

It's not often we have this many tight targets on the waiver wire, but you've gotta give credit where it's due. Let's start with Kyle Rudolph who has four receiving touchdowns over his past four games. Of all the tight ends on this list, Rudolph leads the group with 11 red zone targets this season. You want your streaming tight end to catch touchdowns and that's exactly what Rudolph does. Let's move over to OJ Howard who has been one of the biggest disappointments in fantasy football this season. Well, he made up for it in Week 10 with four receptions for 47 yards and a touchdown.

On to Jack Doyle who has been very consistent recently, posting at least 61 yards or a touchdown in three straight games. With T.Y. Hilton out injured, the Colts are relying more on their tight ends.

Finally, we have Jared Cook who had a season-high 10 targets in Week 10. He might be the best stream of this group in Week 11 as he faces the Tampa Bay Bucs, who are allowing the second-most fantasy points to tight ends this season.

If you're looking for streaming defenses, the top adds for Week 10 will be the Jaguars (at IND), the Jets (at WAS), and the Raiders (vs. CIN).