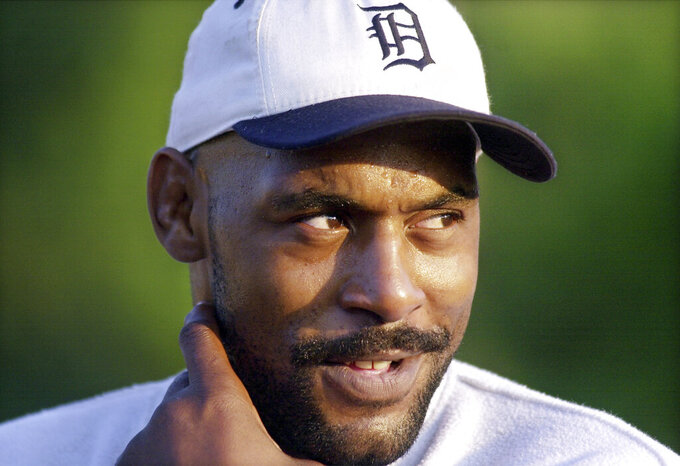 In this July 10, 2001 photo, Carlton Haselrig, who is looking to get into coaching, looks on in Greentree, Pa. Haselrig, a Pro Bowl right guard for the Pittsburgh Steelers in the early 1990s who is also the only wrestler in NCAA history to win six individual national championships, died Wednesday, July 22, 2020. He was 54. (John Heller/Pittsburgh Post-Gazette via AP)

PITTSBURGH (AP) — Carlton Haselrig, a Pro Bowl right guard for the Pittsburgh Steelers in the early 1990s who is also the only wrestler in NCAA history to win six individual national championships, died Wednesday. He was 54.

Pat Pecora, who coached Haselrig to heavyweight division championships at both the NCAA Division II and Division I levels in the 1980s at the Pittsburgh-Johnstown, said Haselrig had been in declining health in recent years. The school said in a statement that Haselrig's death was due to natural causes.

Haselrig, who didn't play a down of college football after suffering an injury during his freshman year at Lock Haven, spent five years in the NFL after the Steelers took him in the 12th round of the 1990 draft. His career was cut short in the mid-1990s due to a battle with alcohol and substance abuse. He dabbled in mixed martial arts in the late 2000s, going 3-2 before retiring.

Born in Johnstown, about an hour east of Pittsburgh, the 6-foot-1, 295-pound Haselrig attempted to play college football for Lock Haven before transferring to his hometown college. Athletic and exceptionally fast for his size, Haselrig put together a run unprecedented in NCAA history.

“We accomplished something that might never be broken,” Pecora said.

“Mentally he just had a unique outlook, he just wasn’t intimidated,” Pecora said. “He didn’t know that just because you went to a small school you weren’t supposed to beat someone from a bigger school. To him that was like saying, this guy comes from a bigger house, he should beat you up. He didn't believe in that.”

The itch to return to football came before Haselrig's senior year. He explored the possibility of transferring to Pittsburgh's main campus but ended up staying at Pitt-Johnstown. Pecora invited a handful of scouts to an open workout a few months before the draft. Short on experience but long on talent, Haselrig made quite the impression on Steelers general manager Tom Donahoe.

“Carlton came in and I remember Tom saying ‘I haven’t seen shoulders on a man like that since (Hall of Famer) Joe Greene,’” Pecora said,

While some of the scouts hinted at trying to sign the unproven Haselrig as an undrafted rookie free agent, Donahoe pledged to grab Haselrig with the Steelers' final selection in the 1990 draft, an agreement he and Pecora came to following a lengthy sit down following the workout.

“I told him, ‘Send Carlton and the toughest player you have into a room and tell him only one will come out, I know which one is coming out,’” Pecora said with laugh.

Haselrig became a starter in his second season in 1991 and earned a Pro Bowl selection in 1992 while opening up holes for NFL rushing leader Barry Foster. He started 36 games across four seasons with Pittsburgh before getting released before the 1994 season due to off-the-field concerns. He returned for a one-year stint with the New York Jets in 1995, playing in 11 games before leaving the sport for good.

Survivors include his wife, Michelle, and nine children.