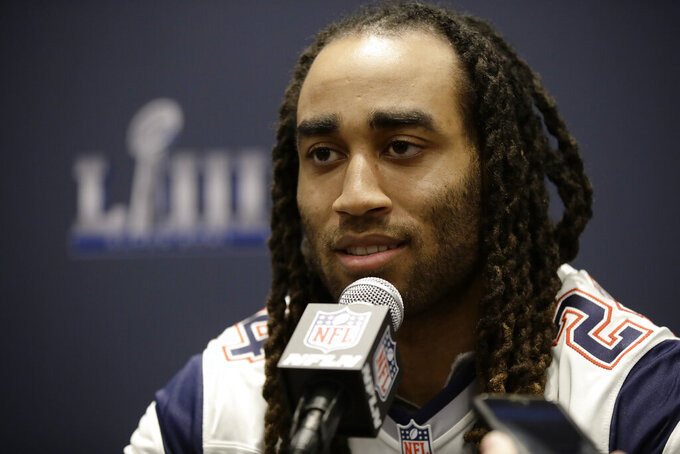 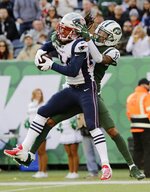 Not in practice. Not in a game. Not ever.

"He's stays quiet, it's not just because y'all are in here," Hightower said with a chuckle this week. "He doesn't talk. He's a mute."

Gilmore's also — silently — assumed the role of lockdown cornerback for New England as it prepares to face two of the NFL's top two receivers in its Super Bowl matchup with the Los Angeles Rams.

Being tasked to guard an opponents' top receiver won't be anything new for Gilmore, who is in his second season with the Patriots after leaving Buffalo and signing a five-year, $65 million free agent deal in 2017.

There were some shortcomings this season. Notably when New England's secondary struggled in the second half of its narrow regular-season victory over Kansas City, allowing Tyreek Hill to catch three touchdown passes.

But more times than not, Gilmore has lived up to the challenge. He combined with J.C. Jackson and Keion Crossen to limit Hill to one catch and no touchdowns in the Patriots' AFC championship game win over the Chiefs. And he's only allowed two catches on the 10 passes thrown in his direction during the postseason.

Gilmore had a career-high 20 passes defensed during the regular season, the second most in the NFL behind Chicago's Kyle Fuller (21). His previous high was 18 with Buffalo in 2015. He's also had two or more passes defensed in four of his past five playoff games, including his first career playoff interception against the Chargers in the divisional round.

"I kind of let my game do the talking," Gilmore said. "I try to play my game regardless of who I'm going against. Some people can handle it, some people can't."

But for a guy who tries to maintain a low profile, it's not something he's trying to put a lot of stock in right now.

"That's a big accomplishment. But the one thing I wanted was a Super Bowl ring and I'm gonna try to do whatever it takes to get that done," he said.

Last season Gilmore's contract was a conversation topic in New England with Malcolm Butler — star of the Patriots' Super Bowl win over Seattle in the 2014 season — not being offered the contract extension he was looking for from the Patriots.

Gilmore started slowly in 2017 and appeared in only 13 games, missing two starts because of a concussion. He finished with two interceptions, but had only nine passes defensed.

Butler signed with Tennessee in free agency in the offseason, making Gilmore the top cornerback in the Patriots secondary.

"To me it doesn't really matter what happened in the past. You just gotta learn from it and get better," he said.

The Patriots will need someone to step up on Sunday, with the Rams trotting out two 1,200-yard receivers in Robert Woods and Brandin Cooks, who was traded by New England to Los Angeles last summer.

Gilmore's practice battles with Cooks are fresh in his mind and he's also played with Woods in Buffalo.

The practice field has been Gilmore's sanctuary this season, teammate and fellow cornerback Jason McCourty said.

"He doesn't even let guys catch the ball in walkthroughs. That's kind of his mindset and his demeanor," McCourty said. "He goes out there, he takes the field and his one job is to shut whoever he's guarding down and that's something that he's done on a week-in, week-out basis for us this season."

Hightower said Gilmore's work ethic is contagious across the defense.

"There will be days when you want to be lackadaisical and you might not want to push yourself. Then you see Steph running from one hash to the other hash guarding a guy on a route, pushing his leverage," Hightower said. "When you see a guy work like that day in and day out, you can't help but push yourself with whatever you're going through."

With a second consecutive shot at a Super Bowl ring, Gilmore said he'll be drawing on everything he's learned over the past two seasons.

"I've learned a lot about myself just trying to be consistent," Gilmore said. "Just really trusting my teammates. I've learned a lot of football. I'm smarter than I was last year, just from coaches putting me in the best position to make plays.

"Now I'm the Super Bowl in position to finish everything off."