Gronkowski makes 2 key catches in what could be last game 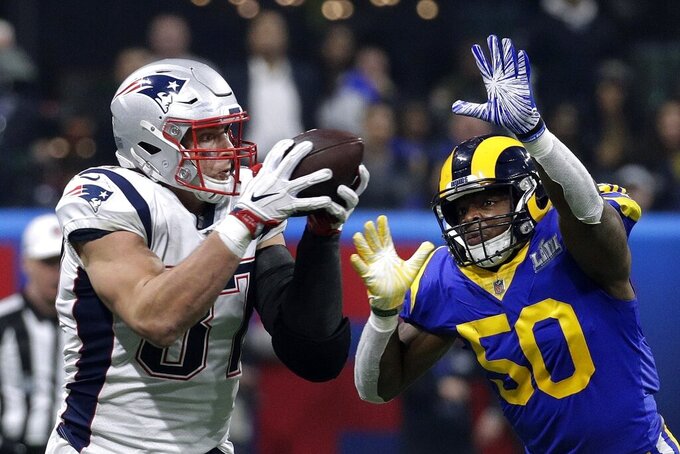 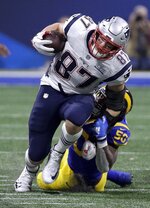 ATLANTA (AP) — Rob Gronkowski rumbled down the field, got past two defenders and hauled in the football to set up New England's go-ahead touchdown.

If this was the farewell performance for the Patriots tight end, he went out in playmaking style.

Was it his biggest catch ever?

"You tell me," Gronkowski said after New England's 13-3 Super Bowl victory over the Los Angeles Rams on Sunday night. "It's up there. I like making big catches like that."

That, of course, is what he has done his entire nine-year NFL career.

The 29-year-old Gronkowski is a three-time Super Bowl champion who has been one of the most dominant players at his position.

But his time is running out, and just when that happens has been a question all season. Back, knee, ankle and arm ailments have sapped him of his ability to stay on the field. And, when he did play this season, he looked mostly like a shell of his All-Pro self.

Gronkowski was seen limping out of Mercedes-Benz Stadium after the game after injuring a quadriceps muscle on a hit in the third quarter.

He was plenty mobile when it mattered most, though. His two biggest catches came after the painful hit.

Gronkowski finished with six catches for 87 yards, including two receptions on New England's only touchdown drive. With the score tied at 3, Tom Brady found his tight end for an 18-yard gain on first down . Two plays later, the Patriots had second-and-3 from the Rams 31 when Brady saw Gronkowski get free down the left sideline.

"When it comes to crunch time," Gronkowski said, "I always find a way."

For a few moments, it was just like old times.

"Incredible catch," Brady said. "He's an awesome teammate, friend, and I'm just so proud of everything that he's done for our team. He just had an incredible game."

Added center David Andrews: "It was a hell of a catch. The best players show up at the best time."

On the next play, Sony Michel ran it up the middle for a touchdown that put the Patriots ahead for good.

"Tom threw it to me and I had to make a play," Gronkowski said. "I just come through where it needs to be that time. He knows to trust in me and throw that ball and I'm going to go grab it."

But, for how much longer?

Gronkowski has danced around the question of retirement whenever the question has come up, but he's due $9 million in base salary next season — a hefty amount for an aging player whose health will always be a concern.

Even if he wants to keep playing, the Patriots could very well say goodbye to one of their best and most popular players in the next few months.

And, if that's the case, Gronkowski and the Patriots went out a winner. As they have so often done.

"I'll tell you this: It was the most satisfying year I've ever been a part of," Gronkowski said. "How we came together, the obstacles we had to overcome, the grind from the beginning of training camp to now, it's just surreal."