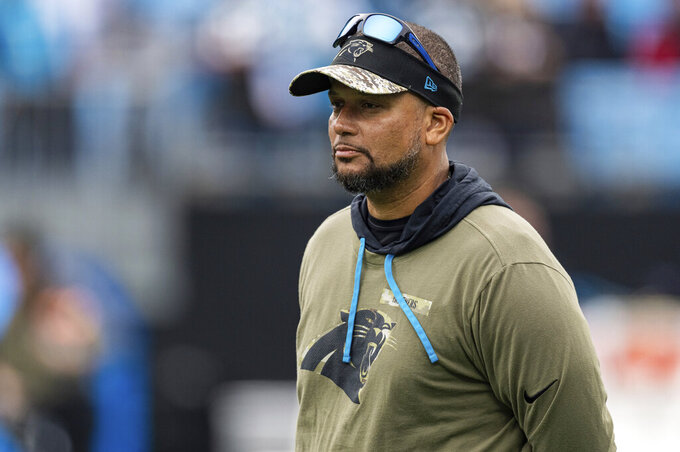 FILE - Carolina Panthers defensive run game coordinator Al Holcomb looks on during warmups before an NFL football game against the Washington Football Team Sunday, Nov. 21, 2021, in Charlotte, N.C. As an African American growing up in Queens, New York, Holcomb spent his fall Sundays watching Tom Landry and the Dallas Cowboys on television, and dreaming of one day becoming an NFL head coach. The 51-year-old Holcomb has spent more than a quarter-century chasing that dream — one that eludes him to this day. (AP Photo/Jacob Kupferman, File)

CHARLOTTE, N.C. (AP) — As an African American growing up in Queens, New York, Al Holcomb spent his fall Sundays watching Tom Landry and the Dallas Cowboys on television, and dreaming of one day becoming an NFL head coach.

The 51-year-old Holcomb has spent more than a quarter-century chasing that dream — one that eludes him to this day.

He has plenty of experience, working 26 years as an assistant coach, including the last 12 at the NFL level. He’s been to two Super Bowls, winning one with the New York Giants, and has coached the likes of Luke Kuechly, Thomas Davis, Patrick Peterson and Chandler Jones. Yet Holcomb is still seeking his first interview for one of the NFL’s coveted 32 head coaching jobs, which currently are held by only five minorities, three of whom are Black.

“I wake up every day with a mission that I have to be the best that I can be and have to dispel any myths or stereotypes that may be out there. And prove that I’m a smart football coach who can lead men, put together game plans, engage with the media and do all those kinds of things,” Holcomb said, who currently serves as the defensive run game coordinator for the Carolina Panthers.

Weekly through the remainder of the regular season, The Associated Press will look at the NFL’s coaching pipeline from the perspective of the coaches and executives who aim for the top jobs on and off the field, and the league institutions that have hindered them in their pursuit of those influential positions.

Holcomb’s immediate goal is to return to being a defensive coordinator, which often serves as a springboard to becoming a head coach.

He was at that precipice once, landing as Arizona Cardinals defensive coordinator in 2018. But head coach Steve Wilks, who is also Black, and the entire staff were fired after one season when the Cardinals failed to find an offensive identity and finished 3-13. Holcomb's defense finished fourth in the league against the pass and fifth in the league with 49 sacks, but struggled to stop the run.

Davis, who played linebacker for Holcomb in Carolina, described his former position coach as an excellent motivator who knows his personnel and has a natural talent for dissecting other teams' weaknesses and exploiting them. Davis said he was excited when Holcomb moved on to become a defensive coordinator, but disappointed he was let go after one season.

“I think what happened in Arizona really speaks to how minority coaches are being treated in this league,” Davis said. “They didn't even give Wilks a chance to develop his own roster and to get things situated with him and Al. It was literally like they were on borrowed time.”

Getting fired in Arizona was a huge blow for Holcomb, who has never been able to get back to that job level. And he knows he faces an uphill battle moving forward.

Pittsburgh’s Mike Tomlin, Miami’s Brian Flores and Houston’s David Culley are the only Black head coaches in the league. Currently there is a growing tendency for NFL clubs to hire young coaches with backgrounds in offense.

Holcomb said one of the biggest challenges in his climb up the coaching ranks was breaking into the league altogether. He never felt he had the right connections or contacts with people in the NFL because at that time there wasn’t a program in place to help develop minority coaches.

While Holcomb said he’s never felt like he’s been passed over for a job opening because of the color of his skin, he believes “there’s a lot of opportunities that are afforded to men who aren’t of color that have had tremendously less experience.”

Holcomb said the increased awareness from the media in recent years surrounding the lack of minority hires at top NFL level positions is a good thing, but added that “in terms of things truly changing, I don’t see that much of a difference."

He said that for minorities to truly make a real impact at the NFL level more needs to be done to help develop the young coaches just breaking into the league so they will be better prepared and have more experience — thus creating a larger pool of potential candidates.

Panthers head coach Matt Rhule called Holcomb one of the top assistants in the league.

Rhule hired Holcomb because he wanted coaches who were “great teachers” and “invested in their players.” In particular, he felt Holcomb would help the team's third-down defense and blitz packages because of his lengthy NFL experience.

“He has been a defensive coordinator and he's one of the guys who should be a head coaching candidate,” Rhule said. “He's excellent with players, excellent schematically, a great teacher, patient and a leader. ... I think Al is a tremendous coach and someone that people should really pay attention to."

As for the current disparity in white NFL coaches compared to minorities, it still perplexes Holcomb.

“Every year there’s a new hot name, a young coach, one not of color, that gets an opportunity to lead a franchise, and you’re sitting there going ‘what did they necessarily do to get to that position?’” Holcomb said.

“At the end of the day people are going to hire who they who they feel comfortable with. ... But I know that there’s a lot of qualified men who are good football coaches and probably deserve an opportunity to at least get an interview and land some of these positions.”