NFL at 100: Chiefs' only title came as underdogs to Vikings 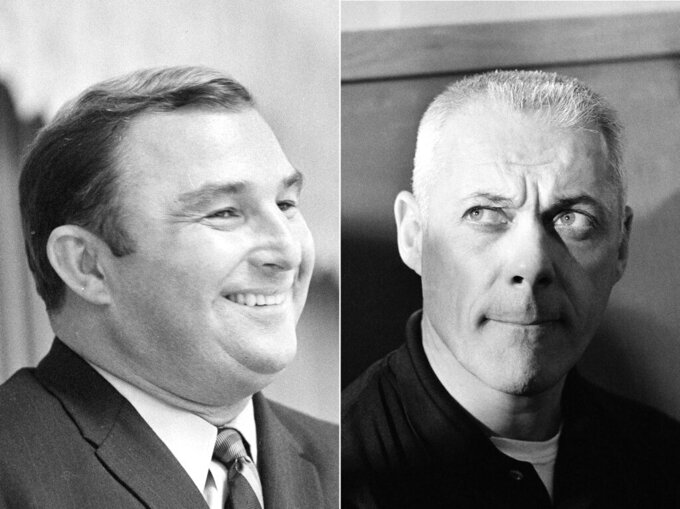 FILE - At left, in a Jan. 12, 1970, file photo, Kansas City Chiefs coach Henry Stram smiles as he listens to reporters' questions the day after the Chiefs beat the Minnesota Vikings 23-7 in the Super Bowl 4 football game, in New Orleans. At right, in a Jan. 11, 1970, file photo, Minnesota Vikings coach Bud Grant speaks to reporters after losing the Super Bowl to the Chiefs in New Orleans. For the second year in a row, a heavily favored NFL team lost to a supposedly weaker AFL opponent in pro football's championship game, when the Vikings fell to the Chiefs. (AP Photo/Charles Kelly, File)

The stage for Kansas City's upset of Minnesota in the fourth edition of the Super Bowl was essentially set the year before, when the brash New York Jets toppled the Baltimore Colts and showed how an upstart AFL team could beat an opponent from the supposedly superior NFL.

There was no more ominous sign of trouble for the Vikings, though, than during the pregame pageantry on that blustery, gloomy afternoon on Jan. 11, 1970, in New Orleans. As a mascot for the Vikings climbed into the basket of a hot air balloon, the wind sent his ride careening out of control and crashing into the seats that sent fans in that area scrambling for safety.

Thanks to the Chiefs, well, the Vikings themselves never got off the ground that afternoon, either. The 23-7 victory by Kansas City was the perfect way for the AFL to wrap up a decade of existence in the last Super Bowl before the two leagues merged.

Minnesota had not only the highest-scoring team in the NFL, but the stingiest defense with an average of only 9.5 points per game allowed. The Chiefs, meanwhile, finished behind the Oakland Raiders in the AFL's West Division that season and were pegged as a 13-point underdog.

They took a stronger, smarter group to Tulane Stadium than the one that lost 35-10 to the Green Bay Packers in the first Super Bowl, though, and head coach Hank Stram was an inspiring innovator who directed a shrewd strategy on offense and defense to keep the Vikings off kilter.

"We looked at each other and thought, 'No way. We don't think these guys can score on us,'" said Chiefs linebacker Bobby Bell, one of six future members of the Pro Football Hall of Fame on the defense alone. "That's what we told our offense."

Bell and his fellow linebackers stacked up behind the defensive linemen to keep the Vikings continually guessing. The Chiefs forced five turnovers and harassed Minnesota's Joe Kapp so thoroughly that one of the toughest quarterbacks in the NFL was forced out in the fourth quarter with shoulder, rib and elbow injuries.

"There wasn't any doubt that the better team won," Kapp told the Minneapolis Tribune that day. "The Kansas City defense looked like a redwood forest. I can't remember one individual playing better than any other. They all seemed to stand out."

Jan Stenerud, the Norwegian soccer-style kicker and another Hall of Famer who wound up finishing his career with the Vikings, made three field goals for the Chiefs. The Vikings had three eventual Hall of Fame players on their defense, including Alan Page and Carl Eller on the feared "Purple People Eaters" front four, and a head coach in Bud Grant who like Stram wound up enshrined in Canton.

The Vikings weren't prepared for the progressive formations and plays Stram sent in for quarterback Len Dawson to operate out of, though, as the NFL took a clear step forward from the pure smashmouth style of the 1960s.

Stram was famously miked up for NFL Films during the game, the first coach to do so. His ceaseless sideline chattering and cackling became the soundtrack for Kansas City's decisive triumph, including this oft-quoted moment of encouragement: "Just keep matriculating the ball down the field, boys."

The Vikings exacted a small measure of revenge in the conveniently scheduled opener of the following regular season, beating Kansas City 27-10 behind four turnovers forced including interceptions of Dawson by Karl Kassulke and Paul Krause. The Chiefs finished just 7-5-2 in 1970.

"That day in the Super Bowl we earned the right to be the better team and be the champion," Stram told reporters in Minnesota afterward, "but that means that each game you must re-earn the name of champion."

Excluding the AFL title won in 1962 by the Dallas Texans, the origin of the franchise before it moved to Kansas City the next year, that victory over the Vikings in New Orleans was not only the only championship for the Chiefs but still the only time they've reached the Super Bowl. They went 22 years before winning another postseason game, making the playoffs only once during a stretch from 1972-1989.

The Chiefs rejoined the league's elite in the early 1990s under head coach Marty Schottenheimer and again in the late 2010s with head coach Andy Reid, but they've had eight division champions in the past 26 years with no trophy to show for it.

The 1969 team set a foundation for consistent success under Grant in the decade that followed, with a .694 winning percentage in the 1970s that ranked fifth in the NFL behind only Dallas, Miami, Oakland and Pittsburgh. The Cowboys, Dolphins, Raiders and Steelers were the only teams that won Super Bowls from the 1971-1980 seasons, and the latter three AFC teams each won one at Minnesota's expense. Of the 12 current franchises yet to win a Super Bowl, the Vikings and Buffalo Bills are tied with the most losses, four.

"We could have won every one of those games if we played it the next day," Grant said in a recent interview the St. Paul Pioneer Press. "The reason they call it the Super Bowl is it's one day. It's winner take all. That's why they call it Super. If we played a three-game or five-game series, maybe we would have won. We were good enough to win. We just didn't win that day."

Here's a rundown of some other memorable matchups between the Chiefs and the Vikings as the teams prepare to face each other again on Sunday:

1974: The Vikings made their first appearance at Arrowhead Stadium and breezed by the Chiefs 35-15 in the final game of the regular season on their way to their third Super Bowls, eventually losing to Pittsburgh for the title. The only touchdown for Kansas City came on an interception return by NFL leader Emmitt Thomas, a future Hall of Famer and longtime assistant coach in the league.

1993: Near the end of Joe Montana's first of two career-closing seasons with the Chiefs, Anthony Parker intercepted his second pass of the game to spark a 30-10 victory for the Vikings in a Sunday night game at the Metrodome and keep them from matching the franchise record for consecutive home losses (five). The Vikings won again the following week to make the playoffs as a wild-card team in quarterback Jim McMahon's only year with the team.

1999: Making up for two lost fumbles earlier in the fourth quarter, Randy Moss returned a punt 64 yards for a touchdown to tie the game for the Vikings with 1:38 left, before the Chiefs used a field goal in the closing seconds of a 31-28 win on a Sunday night. Also during that eventful fourth quarter at Arrowhead Stadium, future Hall of Famer Derrick Thomas forced a fumble on one of his two sacks of Vikings quarterback Jeff George that was returned 44 yards for a score by Eric Hicks.

2003: Vikings rookie Onterrio Smith rushed for 146 yards and three scores and Moss had two touchdown catches, leading the Vikings to a 45-20 victory at the Metrodome that cost the Chiefs a chance at the top seed for the AFC playoffs. They lost to Indianapolis at home in the division round. The Vikings put themselves in position to win the NFC North, only to lose at Arizona the following week by allowing two fourth-down touchdowns in the final two minutes and miss the postseason.