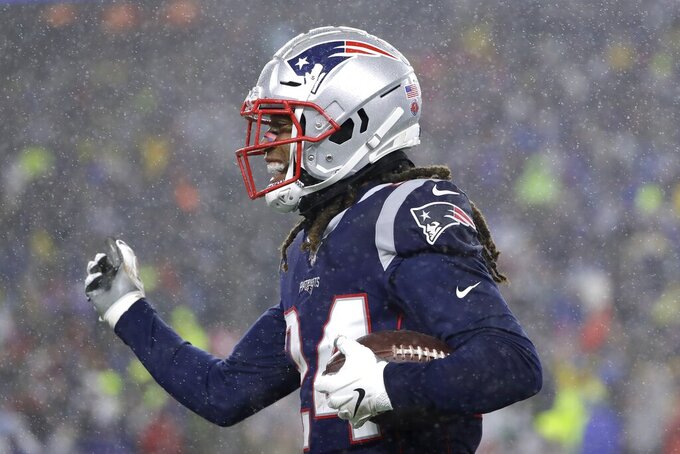 New England Patriots cornerback Stephon Gilmore celebrates his interception against the Dallas Cowboys in the first half of an NFL football game, Sunday, Nov. 24, 2019, in Foxborough, Mass. (AP Photo/Steven Senne)

FOXBOROUGH, Mass. (AP) — Entering its matchup with Dallas, one of the most common critiques of the Patriots' top-ranked defense this season was that it hadn't performed well against a top-tier offense.

New England stomped on that criticism during its 13-9 win over the Cowboys on Sunday, holding the league’s top-rated offense without a touchdown on its way to improving to 10-1.

More importantly, the defense continues to take pressure off Tom Brady and a Patriots offense still searching for consistency.

While it’s true that the defense has statistically had more standout performances in 2019, safety Devin McCourty doesn’t think the offense is making them work harder.

“Everyone keeps talking about our offense struggling and all of that. To me, we’re going out there and we’re complementing each other,” he said. “We get a fourth-down stop and the game is not necessarily over. But then our offense goes out there in a four-minute situation and gets a first down. … When you talk about winning football games, it’s those situations and understanding how to take advantage of those.”

On Sunday, New England followed a familiar blueprint to be in that position against Dallas.

It started by taking away quarterback Dak Prescott’s top receiving targets. Amari Cooper finished with no catches for his first time as a member of the Cowboys, and Jason Witten had one catch for 5 yards.

The Patriots also continued to capitalize on their opponent’s mistakes. This time it was cornerback Stephon Gilmore who had the signature play, getting the Patriots’ 29th takeaway this season when he intercepted Prescott in the second quarter. The play led to a New England field goal that gave it an early 10-0 lead.

Looking back on the film Monday, Patriots coach Bill Belichick said Gilmore’s INT stood out as one of the key moments in the game.

“Probably one of the best plays we’ve had all year,” Belichick said.

When the Cowboys did move the ball they, like many of New England’s opponents this season, had to settle for field goals. Dallas finished 0 for 2 in the red zone on Sunday. The Patriots still have not allowed a red-zone touchdown at home this season.

“That's our goal,” Gilmore said. “We played tight coverage, we stopped the run and that makes it harder in the red zone. The goal is to score points and I think that we did a good job with not letting them score points.”

There are some clear issues that still need ironing out on offense.

For the second straight game Brady appeared openly frustrated with an inability to sustain drives. New England was 3 of 14 on third downs and 1 for 3 in the red zone.

His options in the passing game were limited with Phillip Dorsett (concussion) and Mohamed Sanu (ankle) both sidelined. Brady relied on Julian Edelman (eight catches, 93 yards) as much as he could, and Sony Michel had a decent day running the ball (20 rushes for 85 yards).

But the offensive line also allowed Brady to be hit six times and sacked twice.

Issues on offense aside, rookie receivers N’Keal Harry and Jakobi Meyers both played well with Dorsett and Sanu out.

Harry had the game’s lone touchdown in his second game since returning from injured reserve, catching a 10-yard score from Brady in the first quarter.

Meyers was the Patriots’ second-leading receiver on Sunday, pulling in four passes for 74 yards.

“I think both those rookie receivers have really answered the call,” Brady said during his weekly interview on WEEI radio on Monday. “When you’re put in that position and you don’t have a lot of football under your belt, and you’re playing on a team that’s competing for titles and so forth, there’s a lot of pressure. And I think both of those guys have embraced it.”

Left tackle Isaiah Wynn was activated off injured reserve after he suffered a foot injury in Week 2. He was good in the run game but also had his struggles, allowing five quarterback hurries. He was also whistled for a false start.

The Patriots visit the Texans on Sunday night. The game will serve as the Patriots' final tuneup before hosting Kansas City on Dec. 8 in a highly anticipated rematch of last season's AFC championship game. New England beat Houston 27-20 last season.