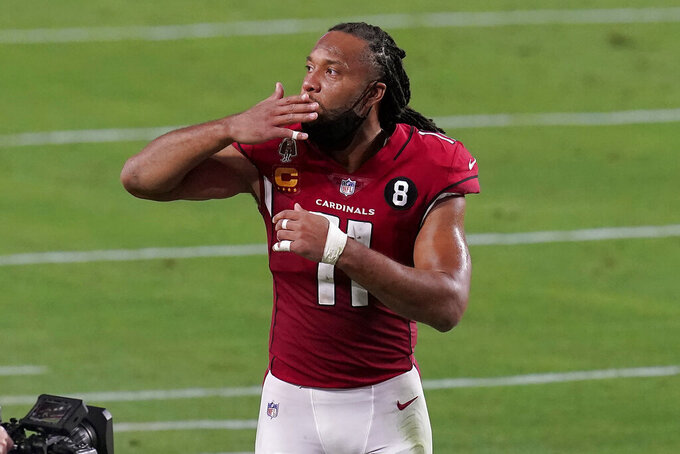 INGLEWOOD, Calif. (AP) — Sean McVay spent the final week of the regular season worrying about how to put together an offensive game plan for his slumping Los Angeles Rams without their leading passer, rusher and receiver in a season finale that could keep them out of the playoffs.

Those weighty concerns were lifted just a bit by the excitement of a side result of Jared Goff's thumb injury: John Wolford, the young backup quarterback plucked from obscurity and tutored by McVay, will make his NFL debut in Goff's place Sunday when the Rams (9-6) host the Arizona Cardinals (8-7).

“That's what you love about being able to coach in this league, is to get a chance to work with guys who have worked really hard and put themselves in this position,” said McVay, who inherited Goff in 2017. “You want to do everything in your power to help them be successful. I think anybody who’s been around John Wolford, this guy — I mean, if you don’t like him, then something is probably wrong with you.

“John has been waiting on this day. He’s been preparing for this day. We just want him to go out, be comfortable and be John.”

McVay will enjoy seeing what Wolford can do at SoFi Stadium. Cardinals coach Kliff Kingsbury expects to have Kyler Murray under center despite a leg injury, but his team faces even more dramatic stakes in the finale.

While the Rams need a win or a loss by Chicago to clinch a playoff berth that seemed a formality before LA's ugly current two-game skid, the Cardinals must win to get in after blowing last week's game against the 49ers in discouraging fashion.

“We’ve just talked about making sure we play our style of football and our best game,” Kingsbury said. "As a team, you want to build throughout the season, and then ultimately, regardless of whether you’re playing on the postseason or not, you want that last game to be your best performance. That’s what we’re striving for.”

The Cardinals' task got fractionally easier with a recent spate of injuries and COVID-19 problems for the Rams, who had stayed mostly free of major setbacks in those areas. Along with Goff, Los Angeles could be without receiver Cooper Kupp, running backs Darrell Henderson and Cam Akers, and defensive line stalwart Michael Brockers.

But the Rams' top-ranked defense is eager for another showdown with Murray and Kingsbury's star-studded offense after handling the Cards quite well in a 38-28 win in Glendale just four weeks ago.

“We know what they're going to come at us with is going to be different,” said Pro Bowl defensive tackle Aaron Donald, who enters the final week trailing Pittsburgh's T.J. Watt by 1 1/2 sacks for the NFL lead. “He's a mobile quarterback, so we've got to try to bottle him up. We know what we've got to do on that.”

As usual in recent years, the Cardinals' annual New Year's visit to Los Angeles looms as possibly the final game in the incredible career of Arizona's Larry Fitzgerald. The superstar receiver has gone year to year with his commitment to the Cards, announcing his previous decisions to continue with little fanfare. The uncertainty is even stranger this season with no fans in the stands to watch Fitzgerald's possible finale.

The 37-year-old Fitzgerald's 54 catches for 409 yards and one touchdown this season are all the lowest marks of his 17-year career, reflecting his supporting role while DeAndre Hopkins racked up a franchise-record 111 catches. But Fitzgerald could top his rookie mark of 58 receptions with a solid game against the Rams.

The Cardinals' defense has been outstanding at putting pressure on opposing quarterbacks over the past three weeks. The group has 17 sacks, 14 tackles for loss, eight forced fumbles and 24 quarterback hits over that span, helping Arizona beat the Giants and Eagles before losing to the 49ers last week.

Linebacker Haason Reddick has had the best stretch of his four-year career with 7½ sacks and six forced fumbles over those three games. Reddick’s production has been crucial after 2019 All-Pro Chandler Jones was lost for the season because of a biceps injury in October.

McVay has never lost to the Cardinals, beating three different head coaches in seven games over his four years in Los Angeles. He is 3-0 against Kingsbury, his friend and fellow offensive guru.

Even with Kingsbury known for his Air Raid offense, Arizona’s offensive success is usually tied to its running game. The Cardinals averaged 169 yards per game on the ground over the season’s first nine games and went 6-3. Since then, Arizona has averaged just 111.5 rushing yards and has gone 2-4.

Kenyan Drake has 919 yards rushing and 10 touchdowns this year, while Murray has 816 yards and 11 touchdowns. Chase Edmonds has added 451 yards rushing.

The Rams' top-ranked pass defense held Fitzgerald, Hopkins and Murray to 140 net yards passing four weeks ago. The marquee matchup again is Hopkins against Pro Bowl cornerback Jalen Ramsey in a rivalry going back to their days in Houston and Jacksonville, respectively. Hopkins had eight catches and scored a touchdown in the teams' first meeting, but managed just 52 yards receiving on his 13 targets.