Steelers trade up in first round to draft linebacker Bush 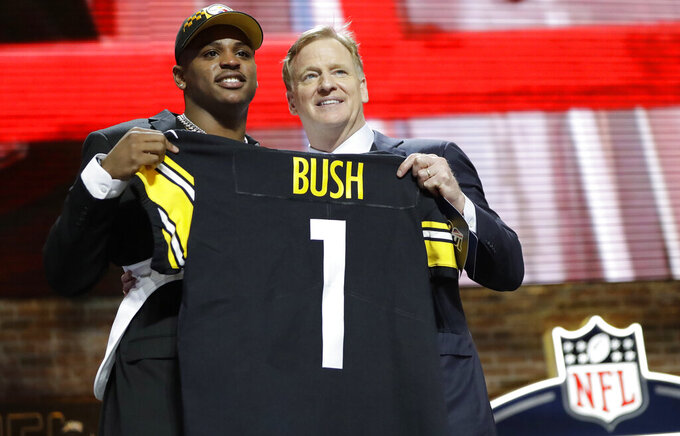 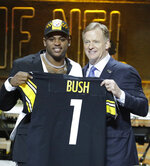 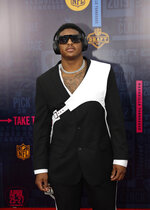 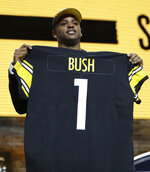 PITTSBURGH (AP) — The Steelers saw a player they liked in Michigan linebacker Devin Bush, so made a rare, aggressive move to get him in the first round of the NFL draft.

Pittsburgh moved up 10 spots in the first round to select Bush with the 10th overall pick on Thursday night.

"If a player is high on your board and he gets within reach, then you make the necessary moves to go up and get him," Steelers general manager Kevin Colbert said.

Pittsburgh swapped first round picks with the Broncos, sending the 20th overall selection to Denver along with a second round pick (No. 52 overall) and a 2020 third rounder.

The Steelers hope Bush can be a capable replacement for Ryan Shazier, the Steelers' 2014 first-round pick who will sit out a second straight season while recovering from spinal surgery in December 2017.

Bush is well-aware of Shazier's story, but he's ready to carve out his own role.

"I wish all the best for Ryan Shazier in his recovery and I hope to see him soon," Bush said. "I'm not trying to compare myself to Ryan Shazier or anybody else. I want to come in and be Devin Bush."

Bush, a 5-foot-11, 225-pound junior, played in 39 games, making 32 starts during a three-year career at Michigan. A consensus All-American in 2018, Bush registered 194 tackles, including 20 for loss, 10 sacks, one interception and 17 passes defensed at Michigan.

"He's an all-situations linebacker, but we're equally as fired up about his intangibles," Tomlin said. "He comes from a football family and he's a football guy. We interviewed a lot of Michigan players and it was unanimous in terms of who their unquestioned leader was."

Pittsburgh started 7-2-1, but a late collapse forced the Steelers to finish 9-6-1 and miss the playoffs for the first time since 2013. The Steelers hope Bush can serve as a three-down linebacker who can rush sideline-to-sideline and also make plays in the middle of the field to bolster a defense that failed to create takeaways or land critical stops down the stretch.

Bush feels he can help remedy the problem.

"I think I'm a good fit because I love to win," Bush said.

While Bush can immediately help the defense with his skillset, Colbert said he might not be thrust into a starting role after the team signed former Los Angeles Rams linebacker Mark Barron to a two-year free agent contract in March.

The Steelers still have eight picks remaining, including two third-rounders. Their next pick, No. 66 overall, is the third-rounder acquired for star receiver Antonio Brown — the only player in NFL history with six straight 100-catch seasons — who was traded away to the Oakland Raiders.

Colbert said the trade for Brown and the future compensation the team may receive after losing All-Pro running back Le'Veon Bell allowed the Steelers to trade up and draft Bush. Bell sat out last season after declining to sign his $14.5 million franchise tender.

"We said under no circumstances would we go into (Friday) with less than two picks," Colbert said. "We would look into trading up, but that was our criteria because there are good picks left. And we believe we'll have some type of compensatory pick in 2020, so it gives us a little more justification for trading away a future pick. Had we not had 10 picks, we probably wouldn't have been able to make this trade."

The last time the Steelers moved up in the first round was 2006, when they picked wide receiver Santonio Holmes. In 2003, Pittsburgh moved the Steelers from 27th overall to No. 16 to select four-time All-Pro safety Troy Polamalu.

"Mean" Joe Greene, the Steelers' No. 1 pick in 1969, announced Bush's selection. Moments earlier, Tomlin was on the call, telling Bush that the Steelers were about to trade up and pick the Michigan standout.

"He was just like 'Are you ready to be a Steeler?'" Bush said. "And I was like, 'Hell yeah coach, I'm ready.' They were super excited and told me how much they felt they needed me. It was a great moment."