Tannehill set to show Titans' success not a blip in career 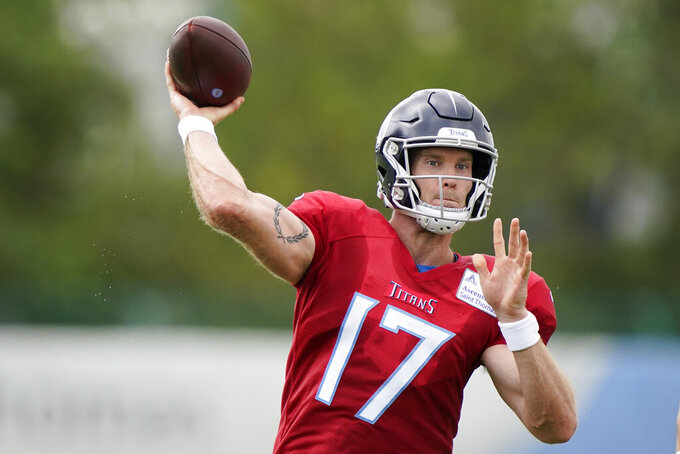 NASHVILLE, Tenn. (AP) — Ryan Tannehill is one of the latest quarterbacks to show what the difference a year, and another team, can do for a signal caller.

Traded by Miami in March 2019, Tannehill bided his time as backup to Marcus Mariota until coming off the bench in Denver last October. Tannehill turned around not only his career on his way to becoming the 2019 Associated Press Comeback Player of the Year, but the Titans' season.

Now Tannehill is optimistic he and the Titans can repeat that performance. Tennessee opens the season on the road Monday night against the Broncos trying to prove they can build on that success together.

The biggest question about the Titans coming off their first AFC championship game in 17 years revolves around Tannehill. The quarterback needs to show his impressive play was more than mere a blip in his career and that being with the right coach, offense and team can make a sustained difference.

The Titans bet on Tannehill and gave him a four-year contract in March worth $118 million.

Coach Mike Vrabel believes being a professional is what allowed Tannehill to be successful when they called him off the bench early in the third quarter of a 16-0 loss in Denver on Oct. 13.

“It’s about taking advantage of your opportunities but being prepared for when that may come,” Vrabel said. “Continuing to improve, understand our system, letting it work for him, being accurate, being decisive with the football. Hopefully as we move on here to this season, which is the most important one, that some of those same things will continue to show up and will even be better."

It might be tough for Tannehill to top all of his accomplishments in 2019.

Tannehill led the NFL in passer rating with a career-best 117.5, 24 points better than his previous best. That mark was the fourth-highest passer rating in NFL history.

He posted a rating of 130 or higher six times in 10 starts in the regular season, including a stretch of four straight starting Nov. 10 against Kansas City. That tied the NFL mark set last by Seattle's Russell Wilson in 2015.

Tannehill also led the league for the highest passing average — 9.6 yards per pass attempt. He ranked second only to NFL MVP Lamar Jackson (9%) for highest touchdown percentage at 7.7%. He also ranked third completing 70.3% of his passes.

The numbers jumped off the stat sheets, but the quarterback who spent his first seven seasons in Miami said he didn't change his preparation. He said that is something he figured out a few years ago to help himself be ready both mentally and physically.

“As far as mentally going through the game plan and studying, and being on the same page with the receivers, all that has been pretty consistent for the past several years,” Tannehill said. “Just wanted to keep that rolling.”

He has no doubt that being with the Titans led to the big change in his statistics.

“Obviously guys around me were playing extremely well, and that helps,” Tannehill said.

Tannehill is among 10 offensive starters back this season for the Titans. Better yet, he's had time to work on his chemistry with wide receivers Corey Davis and Adam Humphries along with A.J. Brown. He worked out with tight end Jonnu Smith in south Florida during the offseason.

Humphries said during the preseason he noticed Tannehill last year as soon as the quarterback arrived, though the veteran sat back letting Marcus Mariota lead as the starter. That didn't stop Tannehill from speaking up if he saw something being run incorrectly.

“The biggest thing with him is he just wants to make sure we’re on the same page as he is, and that’s all you can ask for,” Humphries said. He’s doing a great job."

Notes: OLB Jadeveon Clowney and OLB Vic Beasley Jr. both worked Wednesday during the open portion of practice. Beasley was on a side field working with Vrabel after coming off the non-football injury list last weekend.