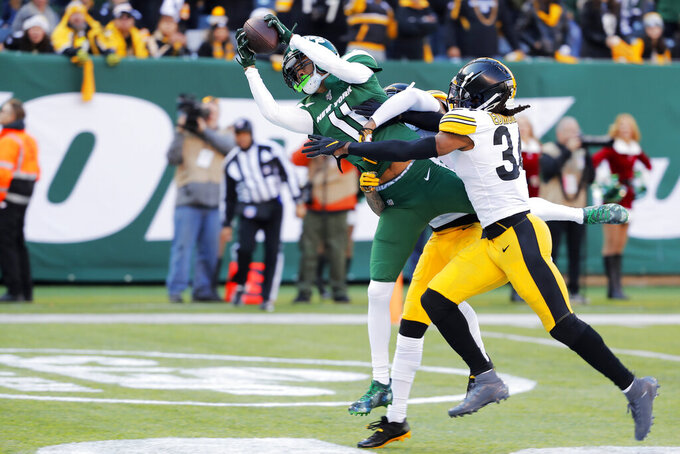 New York Jets wide receiver Robby Anderson (11) pulls in a touchdown during the first half of an NFL football game against the Pittsburgh Steelers, Sunday, Dec. 22, 2019, in East Rutherford, N.J. (AP Photo/Seth Wenig)

FLORHAM PARK, N.J. (AP) — Get ready, Joe Douglas. All eyes are on you for the next several months.

The New York Jets general manager embarks on his first full offseason in charge, with the difficult and unenviable task of trying to improve a team that went 7-9 this season but was ravaged by injuries and inconsistency.

It all led to a ninth straight year without a playoff appearance and had many fans and media wondering if Adam Gase should be one and done with the Jets. Well, Gase is staying put, and now he and Douglas — hired in June after Mike Maccagnan was fired — have plenty of work to do to bring a sense of stability to a frustrated franchise.

And, it begins now.

Douglas, who is scheduled to meet with reporters Tuesday, has to take a hard look at a roster that he has yet to put a firm fingerprint on because of the unusual timing of his hiring.

There are 24 players scheduled to be unrestricted free agents, including wide receiver Robby Anderson, left tackle Kelvin Beachum, linebacker Jordan Jenkins, and cornerback Brian Poole. Pro Bowl safety Jamal Adams and running back Le'Veon Bell are likely to come up again in trade talks/rumors. There are also lots of holes to fill through free agency and the draft, with the offensive line, secondary, linebacker and wide receiver among those Douglas will likely be targeting.

With all that said, some in the organization believe this current Jets squad isn't as far from competing for a playoff spot as it looked when New York was sitting at 1-7. A disappointing season ended with optimism as the Jets won six of their last eight to get within a game of .500.

Sam Darnold's development was the main focus this season, and will continue to be moving forward — especially with the quarterback working in Gase's offense for a second year.

Darnold improved on most of his numbers from his rookie season, finishing with 3,024 yards passing with 19 touchdowns, 13 interceptions and a quarterback rating of 84.3. Still, the Jets finished last in the NFL in total offense.

He played in 13 games, missing three early in the season with mononucleosis. That interrupted his progress, as well as that of Gase's offense — and they didn't get back on track until it was too late to think about making the playoffs.

“You can't get really caught up playing the what-if game," Darnold said. “If we do that, I feel like we'll all be going crazy."

One of the most intriguing aspects of the season was Bell's overall performance, which fell far short of expectations.

There were rumors Gase didn't want to pay the type of big-money contract the Jets gave to Bell — $52.5 million over four years — although the coach regularly lauded the running back's team-first approach and desire to do whatever was needed. Still, Bell finished with just 789 yards rushing and his 3.2-yard rushing average was the lowest of his career. He and Gase have spoken about figuring out next season how to better use him in the offense.

"It's been a different season," Bell said. “I didn't break 1,000 yards. It's disappointing. Obviously, you know, that's like a marker every running back sets to get 1,000 yards, but it didn't happen this year. I've just got to work harder and get better for next year.”

Anderson established a solid rapport with Darnold the last two seasons as the Jets' No. 1 wide receiver, finishing with 52 receptions for 779 yards and five touchdowns this year.

But he's a free agent and could be looking for big money. And, he's not interested in re-signing with New York before free agency begins.

“I don't think it's really logical to sign at this point, you know?" Anderson said. “From a business perspective, why wouldn't I try to see what my value truly could be?"

While Anderson didn't rule out a return, the Jets could be in the market this offseason for a top receiver.

Defensive coordinator Gregg Williams was a miracle worker in some ways, overcoming injuries all around his unit — including to linebackers C.J. Mosley and Avery Williamson, and cornerback Trumaine Johnson — to put up a respectable squad on his side of the ball.

The Jets finished second in run defense, allowing 86.9 yards rushing per game. That's despite New York dealing defensive lineman Leonard Williams at the trade deadline and rookie Quinnen Williams getting off to a slow start because of injuries.

Douglas and Gase can look at the guys up front to start. The Jets used 11 players to start in nine offensive line combinations. That's hardly what you want with a young quarterback and a veteran running back who relies on the communication on the line being sound.

With Beachum, right tackle Brandon Shell and guards Brian Winters and Alex Lewis all scheduled to be free agents, New York could see three or even four new starters on the line. And, the Jets will need to focus on building their rapport throughout the offseason workouts so they're not in disarray by Week 8.

Having a consistent pass rusher has been a frequent issue in recent years for the Jets. Jenkins led them with eight sacks this season, but he's a free agent. New York needs to find a game-changing threat off the edge.

Cornerback is also a problem, although rookie Bless Austin and Arthur Maulet showed some signs they could be pieces to build on.

Gase also needs to be better. A lot better. Despite the rash of injuries and the Jets finishing the season with 20 players on injured reserve, Gase left a lot to be desired from a play-calling perspective. As a guy whose innovative approach on offense is what got him here, Gase will have to figure out how to raise Darnold's level of play while also balancing the need to get the ball in his best all-around playmaker's hands in Bell.