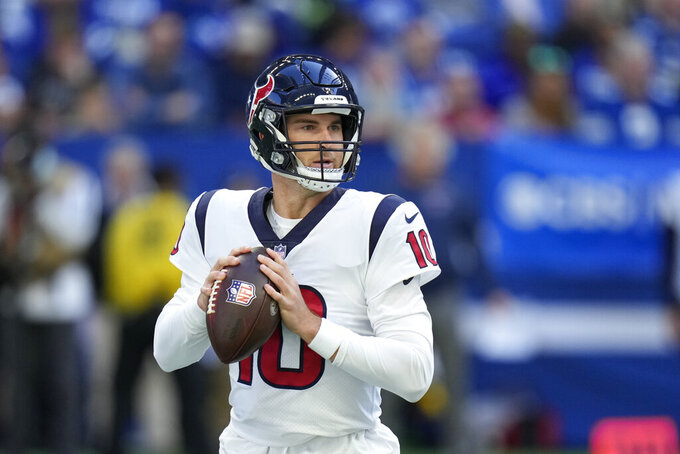 Houston Texans quarterback Davis Mills (10) looks to throw during the first half of an NFL football game against the Indianapolis Colts, Sunday, Oct. 17, 2021, in Indianapolis. (AP Photo/AJ Mast)

HOUSTON (AP) — The Houston Texans hoped Davis Mills would take another step forward Sunday against Indianapolis to help them snap a four-game skid.

Instead, the rookie quarterback threw two interceptions after halftime to doom the Texans to another embarrassing loss.

Mills tied a franchise record by throwing four interceptions in a 40-0 loss to Buffalo Oct. 3, but bounced back last week with three TD passes and no turnovers in a close loss to New England.

Coach David Culley said repeatedly last week that the only way Mills could get Houston in the win column is if he continued to take care of the ball against the Colts.

The third-round draft pick who is playing because Deshaun Watson is out and Tyrod Taylor is injured did that in the first half to keep the Texans in it early. They only trailed by a touchdown when Mills made his first big mistake of the game.

The Texans got a stop to start the second half, but Mills was picked off by Darius Leonard on their first offensive play of the third quarter. Indianapolis took advantage of the mistake when Carson Wentz threw a 28-yard TD pass two plays later to extend the lead to 17-3.

A fumble by David Johnson early in the fourth quarter led to another Indianapolis touchdown. And Mills was picked off again with about 3½ minutes remaining in the 31-3 loss, leaving the Texans without a touchdown in two of his four starts.

Culley knows that Mills needs to improve, but was quick to point out that he’s far from the only one who must play better.

“We don’t (have) the progress that we feel like we need ... at this time,” he said. “We’re still inconsistent with things.”

Perhaps the only good news for the Texans this week is that Taylor could be inching closer to a return after missing four games with a hamstring injury.

“As we move along, he’s getting better and better and it is better than it was last week,” Culley said.

Culley said last week that Taylor would start when he was healthy, but it’s unclear if he’ll be ready to return this week.

Can’t really say anything is working on this team which ranks in the bottom 10 in the league in every major statistical category.

The Texans did better in the area this week than they did against the Patriots when they were flagged eight times, but Culley was still irked because of when they committed the penalties.

“Penalties do happen, but we seem to be getting them, especially on the road, at critical times that are hurting us on both sides of the ball,” he said.

Rookie WR Nico Collins had four receptions for 44 yards in his return Sunday after missing three games with a shoulder injury.

Johnson’s fumble wasn’t the reason Houston lost Sunday, but it’s a mistake a veteran can’t make when a team is struggling with a rookie quarterback. Johnson had just two carries for 7 yards against the Colts as he’s been relegated to backup duty behind Mark Ingram after starting last season.

S Terrance Brooks remained in Indianapolis on Monday for observation after leaving Sunday’s game with a bruised lung. Culley said he could return to Houston on Monday night, but might have to stay one more day. He will not play this week.

7 — Mills is tied for third in the NFL with seven interceptions this season despite playing just 4½ games.

The Texans have what could be their toughest task so far on Sunday when they’ll face some old friends in a trip to meet the undefeated Arizona Cardinals. Houston will attempt to end its skid in its first meeting against J.J. Watt and DeAndre Hopkins. Watt spent a decade with the Texans before being released after last season and signing with the Cardinals while Hopkins is in his second season in Arizona after the trade that brought Johnson to Houston.