Vikings use meaningless Bears game to regroup for playoffs 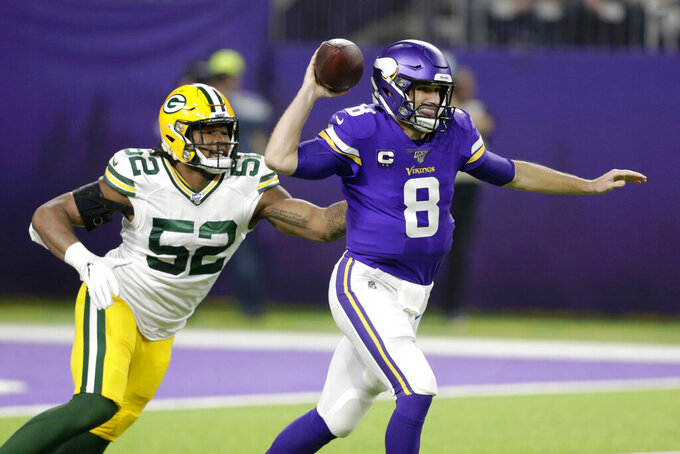 MINNEAPOLIS (AP) — After coming home on Christmas night from practice and meetings with the Minnesota Vikings, Kirk Cousins plopped down in his recliner.

Turning to his wife, Julie, he expressed his appreciation of her effort to make the day special for them and their two young boys despite his work schedule that leaves little time for festivities.

“She said, ‘Thank you for faking it and not being a crab all day,’” Cousins said on Thursday, reflecting on the sour mood that Minnesota's loss to Green Bay put him and his teammates in right before the holiday. “I said, ‘Yeah, I didn’t feel like it was a great Christmas, but I tried to put a smile on.'"

The 23-10 defeat didn't detour the Vikings from their postseason path, since their spot was clinched before they took the field against the Packers on Monday night. They had to see their chief rival celebrate as NFC North champions in their stadium, though, and their offense that made so many strides this year was stifled in humbling fashion in prime time for the whole country to watch in a way that raised questions anew about their viability in the playoffs against top-tier competition.

The Vikings (10-5) have one more chance to try to iron out some wrinkles, whether new or old, when they host Chicago on Sunday afternoon against a Bears team that was eliminated from contention for the playoffs two games ago.

“You only get 16 of these, and so when you don’t put your best football or put your best foot forward in one of them, it bothers you,” Cousins said. “Thankfully, we’ve got a playoff game up ahead in addition to this one, and you know there’s still more work to be done. Hopefully we can put a performance on the field that will put you in a better place.”

What coach Mike Zimmer and his staff must balance is the merit of taking a healthy team to the playoffs against the need to create some momentum going in. The Vikings played the Packers without their top two running backs, Dalvin Cook (shoulder) and Alexander Mattison (ankle), and starting linebackers Eric Kendricks (quadriceps) and Anthony Barr (hamstring) left during the game with new injuries.

“Do you look at the entire season and look at how well the offense has played throughout the course of the year? Or do you look at a one-game situation? So that’s kind of what I’m weighing right now,” said Zimmer, who will take the Vikings to the postseason for the third time in six years. “Do I go with the belief that they’ve been really good all year long? Or do we go in and, because we didn’t play very well the other night, try to get going again?”

“You want to show continuous improvement,” Cousins said, "and one way is to correct any mistakes that were made previously against the same team.”

Bears coach Matt Nagy and his assistants have also been considering this week whether or not to end the season early for some of their banged-up players. Rookie Alex Bars might start at right guard if Rashaad Coward is unavailable after injuring his knee in the loss to Kansas City on Sunday night.

“Being able to go win the game is important to us,” said Nagy, who guided the Bears (7-8) to the NFC North title with a 12-4 record in his rookie year. “It does also, at the same time, present some opportunities for … knowing kind of where they’re at and where we’re at. We’ll see where that takes us."

BACK IN A FLASH

One of the two Pro Bowl picks for the Bears was kickoff returner Cordarrelle Patterson, who played his first four NFL seasons with the Vikings after being drafted in the first round in 2013. He's second in the league with an average of 29.5 yards per return, including one touchdown.

“I love the way he plays the game. He’s the best special teams player in the league right now, the way he’s been able to cover punts, return kicks and things like that,” said Vikings wide receiver Adam Thielen, one of his close friends.

After making some strides last season, Bears quarterback Mitchell Trubisky has regressed in his third year in the league by almost every statistical measure. The second overall pick in the 2017 draft still must prove he's the right player to commit to for the future, giving him plenty to play for against the Vikings.

“You’ve just got to take advantage of every opportunity you get, because that’s how the NFL is,” Trubisky said, adding: "There's always that sense of urgency that it could always be your last snap.”

For the fourth straight year, marking every regular-season finale since U.S. Bank Stadium opened in 2016, the Vikings are hosting the Bears in Week 17. They also did so in 2014 and 2011.