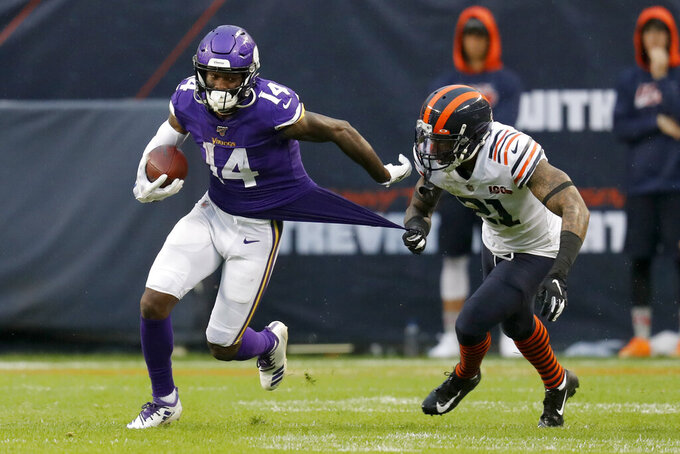 EAGAN, Minn. (AP) — Stefon Diggs said he’s dissatisfied with the state of the Minnesota Vikings, with the offense again struggling to find a rhythm.

Though the fifth-year wide receiver stopped short of explicit confirmation that he’d prefer to play elsewhere, while speaking to reporters on Thursday for the first time in two weeks, he managed to fan the flames around his status with the Vikings with a surreptitious answer to a question about speculation he’s seeking a trade.

“I feel like there’s truth to all rumors, no matter how you dress it up,” Diggs said, later adding: “I’ve heard a lot of things circulating. I can’t say what’s real and what’s not. I didn’t make them up.”

Without any leverage over the team to force a trade, in the first year of the contract extension valued at $72 million he signed last summer, Diggs likely wouldn’t get his wish if he indeed stated a desire to be dealt. For a 25-year-old coming off a 100-catch, 1,000-yard season, he’s on a team-friendly deal one, with eligibility for free agency not coming until after the 2023 season unless he were to be released sooner than that.

“I haven’t communicated anything. The conversations I’ve had have only been about team and trying to have success on the field,” Diggs said. When asked if his agent had made such a request, Diggs said he hadn’t spoken to him about it.

Two hours after his media session in the locker room, Diggs was on the field for practice as usual, after conspicuously missing the workout on Wednesday. That absence was labeled by the Vikings as “not injury related.” Diggs said on Thursday he hasn’t been feeling well since the team’s 16-6 loss at Chicago on Sunday, tugging a hooded sweat shirt tightly against his head and his chin. The NFL’s official injury report allows for an “illness” designation, and that was not used by the team in this case.

“The space that I’m in right now is there’s definitely a lot of question. I can’t sit up here and act like everything is OK. It’s obviously not,” Diggs said. “But what I can say at this point? Just trying to work through it.”

Diggs said he’s spoken with “everybody” in the organization about his feelings, including general manager Rick Spielman, but he declined to be specific about what change would bring him satisfaction, beyond wanting to win.

Diggs said he hopes to play this Sunday, when the Vikings visit the New York Giants. Coach Mike Zimmer said “we’ll have to see” if that happens.

As for Diggs’ absence on Wednesday and his overall frustration, Zimmer declined to address it.

“I believe that’s an internal matter, and I’m not going to talk about it,” Zimmer said.

From Percy Harvin’s frustration with Christian Ponder in 2012 to Cris Carter and Randy Moss complaining to Daunte Culpepper in 2001, such discontent displayed by a wide receiver with the way the passing game is going is not new to the Vikings, or around the league, for that matter.

The passing attack thrived in the first half of last season, the debut for Kirk Cousins, but opposing defenses smothered Diggs and Adam Thielen often down the stretch as the offense ran out of steam on the way to an 8-7-1 finish that kept the Vikings out of the playoffs. Cousins and Thielen were in a heated sideline conversation after one failed possession in the final game of 2018, a loss to the Bears.

Diggs had to be calmed down at one point during the game last weekend during yet another stifling performance by Chicago’s defense that limited Thielen to 6 yards on two receptions, and Thielen was vocal afterward about his frustration. Cousins even apologized to him on a team-produced podcast for overthrowing a deep pass on third down in the first half after Thielen got behind the secondary for what would have been a touchdown.

Zimmer’s desire to run the ball more effectively and frequently this year has minimized to date the route-running and pass-catching talents of Thielen and Diggs, which can be dismissed if the ground game leads to wins. But the Vikings (2-2) are in last place in a daunting NFC North, with the second-fewest passing yards per game in the league.

“Diggs is one of my closest friends, and for me, I’m just trying to worry about my job, and those are things that are out of my control,” Thielen said. “I’m going to go back to work and try to help this football team win games, as he is. He was out there today and grinding.”