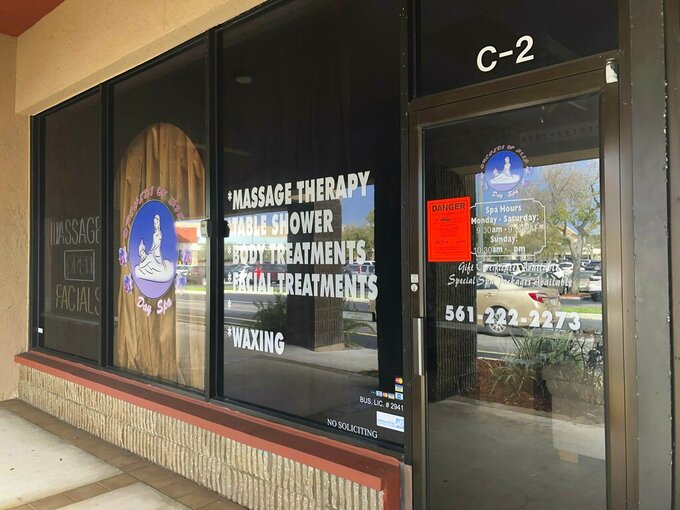 FILE - In this Feb. 19, 2019, file photo, a sign is posted outside of Orchids of Asia Day Spa, in Jupiter, Fla. A Florida appeals court ruled Wednesday, Aug. 19, 2020, that police violated the rights of New England Patriots owner Robert Kraft and others when they secretly video recorded them paying for massage parlor sex acts, barring the tapes' use at trial and dealing a potentially deadly blow to their prosecution. (Hannah Morse/Palm Beach Post via AP, File)

Lei Wang, 41, and Shen Mingbi, 60, each pleaded guilty in Palm Beach County circuit court to one count of soliciting another to commit prostitution, records show. They were fined $5,000 each and ordered to complete 100 hours of community service.

A misdemeanor charge against Kraft was dropped earlier this year after courts blocked their use of video that allegedly shows him paying for sex. Kraft had pleaded not guilty but issued a public apology for his actions.

The four women, Kraft and two dozen other men were charged in February 2019 in a multicounty investigation of massage parlors that included the installation of video cameras in the Orchids of Asia’s lobby and rooms under the ruse that a bomb threat required its evacuation. Police say the recordings show Kraft and other men engaging in sex acts with women and paying them.

Those recordings where later thrown out after a county court judge ruled the warrant allowing the cameras’ installation didn’t sufficiently protect the privacy of innocent customers who received legal massages. An appeals court sided with the judge.

Palm Beach County State Attorney Dave Aronberg dropped the charges against Kraft and the other men in September, explaining that without the video recordings, there wasn’t enough evidence to convict them.