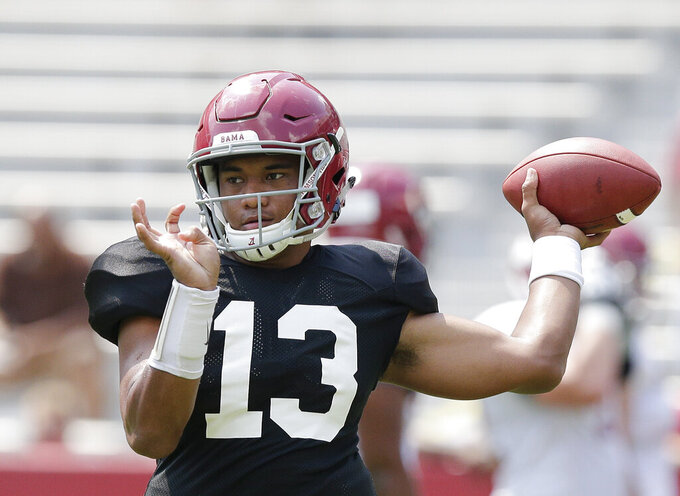 FILE - In this Aug. 5, 2017 file photo Alabama quarterback Tua Tagovailoa throws the ball during an NCAA college football practice at Bryant–Denny Stadium in Tuscaloosa, Ala. Tagovailoa signed a $30.275 million, four-year guaranteed contract with the Miami Dolphins, a person familiar with the negotiations confirmed Monday, May 11, 2020 to The Associated Press. (AP Photo/Brynn Anderson, file)

MIAMI (AP) — Now Tua Tagovailoa can pay for that Cadillac Escalade he gave his mom.

The new Miami Dolphins quarterback signed a $30.275 million, four-year guaranteed contract, a person familiar with the negotiations told The Associated Press on Monday.

The contract includes a $19.6 million signing bonus, according to the person who spoke to the AP on condition of anonymity because the Dolphins hadn't announced the deal.

Tagovailoa posted a video on Mother's Day that showed him surprising his mother, Diane, with a black SUV.

Last month the Dolphins selected Tagovailoa with the fifth overall pick in the draft. They are optimistic he’ll recover fully from a hip injury that ended his Alabama career in mid-November and hoping he’ll become a franchise quarterback.

Tagovailoa says doctors have indicated he’s on schedule for a return in 2020. His No. 1 jersey is among the best-selling in the NFL since it was assigned to him last week.