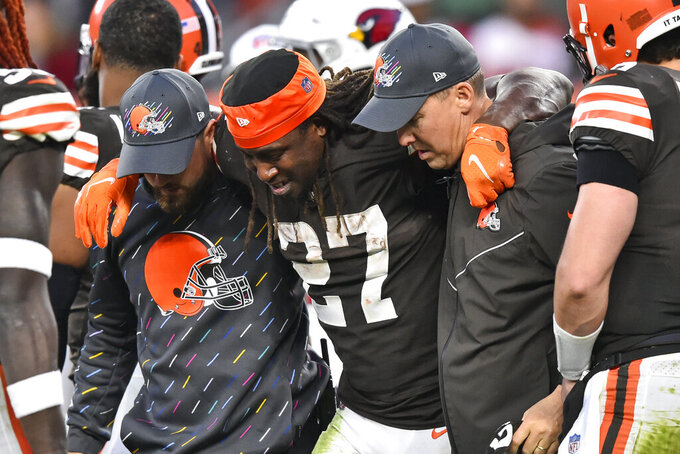 Cleveland Browns running back Kareem Hunt (27) is helped off the field after an injury during the second half of an NFL football game against the Arizona Cardinals, Sunday, Oct. 17, 2021, in Cleveland. (AP Photo/David Richard)

CLEVELAND (AP) — The Browns will be without one of their best offensive players for quite a while.

Punishing running back Kareem Hunt is expected to miss at least one month because of a significant calf injury sustained against Arizona on Sunday, one of several key injuries to a Cleveland team with little time to heal.

The Browns are also awaiting further tests on quarterback Baker Mayfield's injured left shoulder, and they aren't sure yet if he — or other starters, including running back Nick Chubb and receiver Odell Beckham Jr. — will be able to play Thursday night when Cleveland hosts the Denver Broncos.

“I’ll have a better sense tomorrow with a lot of these guys. I don’t know is the truth. I have to see how Baker and all these guys respond over the next 24 hours,” Stefanski said on a Zoom call.

Hunt, who has rushed for 361 yards and five touchdowns this season, got hurt in the fourth quarter of Sunday's 37-14 loss to the Cardinals.

Stefanski said that Hunt, who along with Chubb gives Cleveland one of the NFL's best rushing attacks, will likely go on injured reserve, which means missing at least three games.

Stefanski said Hunt’s injury is more in the ballpark of four to six weeks.

The Browns (3-3) were already missing Chubb due to a calf injury, along with starting offensive tackles Jack Conklin and Jedrick Wills Jr., before Hunt went down without any contact on a passing play as Cleveland tried to rally.

Hunt had to be helped from the field and the sight of the hard-charging 26-year-old being carted to the locker room left a few teammates shaken.

“Him and Nick and some of the guys we play with, they just put everything they have on the line every time they touch the ball,” said left guard Joel Bitonio. "Sometimes this guy falls, he’s hurdling over guys at the line of scrimmage and stuff, and he just wants to win so bad.

“I really do feel like he represents how the Cleveland Browns want to play football."

The Browns are badly banged up.

Mayfield, who has been playing with a partially torn labrum in his non-throwing shoulder, had his shoulder twice pop out of the socket while committing three turnovers in the lopsided home loss.

Mayfield twice went into the sideline medical tent for treatment left FirstEnergy Stadium with his arm in a sling. During his postgame news conference, Mayfield said “absolutely” when asked if he would come back on a short week to face the Broncos.

Stefanski didn't seem quite as confident.

“We’ll make sure to work through all that in the next couple days and obviously take what the medical staff says, what Baker says, and we do that for all of our players,” Stefanski said. "That’s making sure we make prudent decisions with all these guys.”

Case Keenum, who has 62 career starts, is Mayfield's backup.

Mayfield has been dealing with the partial tear since injuring his shoulder in Week 3 against the Houston Texans when he tried to make a tackle after throwing an interception. He's worn a harness the past four weeks.

Mayfield led the NFL in completion percentage through two games, but he hasn't been the same since getting hurt. He had two fumbles and an interception, and was sacked three times by the Cardinals.

Beckham finally connected more with Mayfield and had a team-high five catches for 79 yards. However, he took a hard shot to his right shoulder in the first half and had to go to the locker room for evaluation and treatment.

The second-round draft pick had been playing well.

Injuries have been a major issue for the Browns, but they're hardly alone as numerous teams have been hit hard. Stefanski can't dwell on them with a game in three days.

“We are still devising that game plan, and that is what we have to do," he said. "We have to be fluid in what we do. The truth is we may not know who is available to us for another 24-48 hours.

"That is what we have to do. That is no different than everybody in the NFL right now. You have guys who may make it to the game and may not, and that is just life in the big city.”