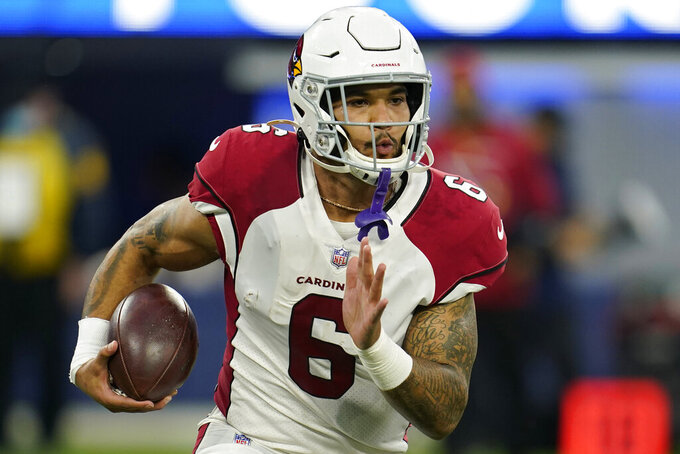 FILE - Arizona Cardinals running back James Conner (6) warms up before an NFL wild-card playoff football game against the Los Angeles Rams in Inglewood, Calif., Monday, Jan. 17, 2022. The Arizona Cardinals are bringing back James Conner on a three-year deal, rewarding the running back for a stellar 2021 season that included a franchise record 18 total touchdowns. (AP Photo/Marcio Jose Sanchez, File)

TEMPE, Ariz. (AP) — The Arizona Cardinals are bringing back James Conner on a three-year deal, rewarding the running back for a stellar 2021 season that included a franchise-record 18 total touchdowns.

Conner was a huge part of the Cardinals' offense last season with 752 yards rushing and 375 yards receiving. The 26-year-old clearly had a feel for the end zone, scoring 15 times on the ground and three times after catching passes.

The bruising 233-pound back gives the Cardinals a hard-nosed running threat to complement young quarterback Kyler Murray, who can also run but became more of a pocket passer last season. Conner earned his second Pro Bowl selection in 2021 and ran for at least one touchdown in five consecutive games at one point last season, which tied a franchise record.

Arizona's offense dropped off considerably during the season's final few weeks, at least partly because Conner was at less than full strength with various injuries to his ankle and ribs.

The Cardinals have been busy over the past few days trying to make sure Murray has playmaking options around him. The team brought back tight end Zach Ertz on a three-year deal Sunday. The 31-year-old Ertz had 56 catches for 574 yards and three touchdowns in 11 games with the Cardinals following an October trade with Philadelphia.

The Cardinals also announced Monday that backup quarterback Colt McCoy had agreed to a two-year deal, linebacker Dennis Gardeck was coming back on a three-year deal, and defensive lineman Michael Dogbe signed a one-year deal.

McCoy had a 2-1 record last season as the starter when Murray was out with an ankle injury. Gardeck is one of the team's most important special teams players, and Dogbe has slowly worked his way into the defensive line rotation.

By Tom Canavan 12 minutes ago
By Dennis Waszak Jr. 53 minutes ago
an hour ago
3 hrs ago
By Joe Reedy 13 hrs ago