Chiefs could place stranglehold on another AFC West title 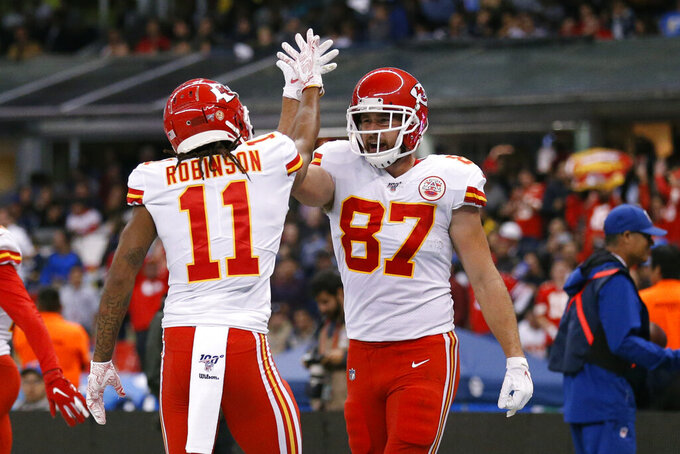 KANSAS CITY, Mo. (AP) — The Kansas City Chiefs had one of their best weeks of the season without even playing.

After traveling to Mexico City to knock off the Los Angeles Chargers, the Chiefs were able to enjoy their long-awaited bye while watching the New York Jets rout the Oakland Raiders. And that gave the Chiefs some much-appreciated wiggle room in the pursuit of a fourth straight AFC West title.

Now, they can just about clinch it when the Raiders visit Arrowhead Stadium on Sunday.

“We don’t really care what happened yesterday,” Chiefs coach Andy Reid said Monday. “It doesn’t matter in the National Football League. You have to be ready every week, especially when you have an opportunity to play an AFC West opponent. It’s really about us getting ready.”

The Chiefs (7-4) finished second in the division three straight years before winning the past three seasons. That is already the longest streak in franchise history, and a fourth would match the Raiders (1967-70) and Chargers (2006-09) for the third-longest streak among AFC West teams.

“You always know when you play the Raiders it’s going to be a battle,” Reid said. “They were coming off a three-game win streak there. They were on a roll. So now you put things on the line here. You get toward this part of the season and things count for both teams.”

It has been awhile since the Raiders (6-5) were playing meaningful games this time of year.

It’s nothing new for the Chiefs.

What is rather novel, though, is the fact that Kansas City had a chance to rest up last week. The team had been grinding since the start of training camp in July, playing a schedule heavy on primetime games, shortened weeks and an added hurdle of playing the Chargers at altitude in Mexico.

Along the way, they weathered a litany of injuries that threatened to derail their season.

Patrick Mahomes hurt his ankle in the opener against Jacksonville and was still hobbling when he dislocated his kneecap on an innocuous quarterback sneak against Denver on Oct. 17. The league MVP missed a pair of games before returning to play well in a shootout loss at Tennessee.

The week off gave both his ankle and knee a chance to heal up.

The running back situation is also unclear with Damien Williams and LeSean McCoy banged up.

Sammy Watkins missed time with an ailing hamstring while fellow wide receiver Tyreek Hill, who broke his collarbone against Jacksonville, picked up a hamstring injury of his own last week.

“I think he’ll be all right,” Reid said. “I’m optimistic. I know he loves to play the game. He’s been with (trainer) Rick Burkholder a bit this past week, but he had some things he also had to take care of. I’ll see tomorrow how he handles things. He’ll get out and move around a bit.”

The Chiefs are also getting healthy on defense.

Top pass rusher Frank Clark, who signed a $100 million-plus deal in the offseason, is feeling better after dealing with a sore neck. Defensive tackle Chris Jones is back to chasing quarterbacks after a core muscle injury and cornerback Kendall Fuller is back after thumb surgery.

In other words, the Chiefs are as healthy as they’ve been since the start of training camp.

“I think it was good to get a little break in there,” Reid said. “We’re far enough along in the year that I felt comfortable to do that and just let them decompress a little bit.”

Just in time for the stretch run, too.

After facing the Raiders, the Chiefs visit AFC favorite New England. Then come home games against AFC West rivals Denver and Los Angeles sandwiched around a trip to frigid Soldier Field in Chicago.

“These are long seasons,” Reid said, “and the late bye isn’t a bad thing where we were sitting.”