Chiefs toughen up on defense, punch ticket to Super Bowl 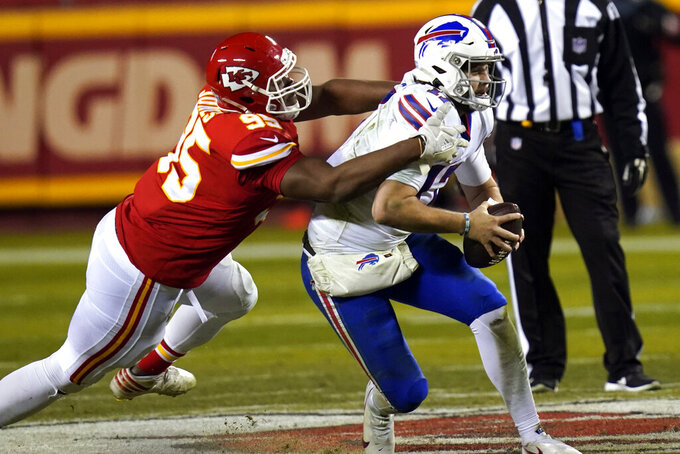 Josh Allen and the Buffalo Bills led the AFC in scoring until they ran into a defensive coordinator known for shutting down high-scoring offenses.

Now Steve Spagnuolo gets another shot at Tom Brady in the Super Bowl, this time with both guys on different teams.

Thirteen years after Spagnuolo’s aggressive defense held Brady and the Patriots to 14 points as the New York Giants prevented New England from going 19-0, the Kansas City Chiefs beat Buffalo 38-24 in the AFC championship game Sunday to set up a matchup against Brady and the Tampa Bay Buccaneers.

“I got nothing to say to him,” Chiefs defensive end Frank Clark said when asked if he had a message for Brady similar to Chase Young's “I want Tom” statement after Washington clinched the NFC East title. “I'll see his (butt) at the Super Bowl.”

Allen finished with 287 yards passing and two touchdowns and 88 yards rushing, but Kansas City’s aggressive defense didn’t allow the Bills to get in a rhythm.

Allen was pressured and harassed throughout the game by Clark, Chris Jones and a defense that has been quietly tough while Patrick Mahomes and Kansas City’s powerful offense grab the headlines.

“I’m just happy to do everything I can for my team, just doing what I have to do," said Clark, who had two sacks. “I got all the faith in the world in Spags calling plays and that’s all it is.”

Rashad Fenton had an interception in the fourth quarter that led to a touchdown that put the Chiefs ahead 38-15.

After the Bills scored a touchdown with just over four minutes remaining and recovered an onside kick, Kansas City’s defense toughened up and got another big sack. Allen threw a pair of incomplete passes from the Chiefs 15 before Tanoh Kpassagnon sacked him for an 18-yard loss that forced Buffalo to settle for a field goal.

The Bills didn’t get the ball again.

“It wasn’t anything we didn’t expect,” Bills center Mitch Morse said. “It’s just they out-executed us, which is disappointing. But that’s why they’re AFC champions and we’re going home.”

Allen finished fourth in the NFL in completing 69.2% of his passes, but completed just 58.3% against Kansas City. It was the second time this season the Chiefs held him under 60%.

“We ran our same defense that we've been running, the past few weeks,” Mathieu said. "Obviously, (Diggs) is a great receiver and great receivers require you to double them from time to time. It’s good to see those guys step up and win one-on-one matchups.”