Commanders guard against letdown at Texans after big win 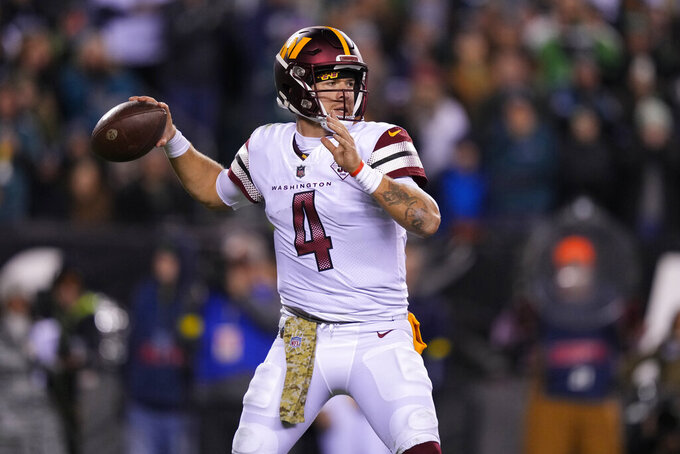 Washington Commanders quarterback Taylor Heinicke (4) throws a pass during the second half of an NFL football game against the Philadelphia Eagles, Monday, Nov. 14, 2022, in Philadelphia. (AP Photo/Matt Slocum)

HOUSTON (AP) — Riding the wave from their big win over the previously undefeated Philadelphia Eagles, the Washington Commanders are guarding against a letdown against the struggling Houston Texans on Sunday.

Quarterback Taylor Heinicke, who will start a fifth straight game for the injured Carson Wentz, said the team was reminded this week that although the Texans have one win, they’ve been competitive in almost every game.

“They’re close. ... We can’t take them lightly,” Heinicke said. “Obviously, we had a huge game against the divisional opponent, undefeated, big win. The worst thing that we can do is go and lay an egg on Sunday. So again, we’re just trying to keep the ball rolling, keep working hard.”

And coach Ron Rivera is quick to remind his team that at .500 and in last place in the NFC East, it still has a long way to go despite the win over the Eagles.

“We’ve not arrived by any means. ... So, let’s get refocused, let’s get ready to face Houston,” he said. “I’ve always appreciated and respected the way coach (Lovie) Smith does things and I think our players have to understand that.”

The Commanders have won four of five after opening the season 1-4. The Texans are the only team in the league with just one win and are searching for a way to end a four-game skid.

“You get frustrated when you’re not winning,” Houston tight end Jordan Akins said. “We’re trying to do more, come together, do more off the field, come together as a team and just push each other more inside the building as well. Practice harder, study more, do just a little more.”

Heinicke will start Sunday, with Rivera saying Wentz has not yet been designated to return from injured reserve after having surgery to repair a broken finger. It’s a game-by-game proposition for the Commanders, who are 3-1 since Heinicke took over for Wentz.

“We have time,” Rivera said. “That’s the really good thing that is on our side. (Heinicke has) done some good things, and we’ll see how it happens this week.”

Heinicke, who was out of football two years ago before joining Washington in December 2020 as its quarantine quarterback, tries not to think too much about the pressure of being in a leading role.

“At the end of the day when I’m driving into the facility, I’m like, ‘This is a game that I grew up wishing to play, and it’s a game that young people play,’” Heinicke said. “It’s supposed to be fun, so I try and keep it very simple and fun.”

Smith was asked why he hadn’t considered a quarterback change after Davis Mills and Houston’s offense converted one of six trips inside the red zone in a loss to the Giants on Sunday.

Despite the struggles of the second-year player, Smith stood behind Mills after the game and when questioned about it later in the week.

He was also quick to point out that Mills, who has thrown five interceptions in the last four games, is far from the only player who is struggling.

“We don’t think that ... Davis Mills' play (is) all of our problems, (like), ‘Let’s just get Davis out of there and everything’s OK,’” Smith said. “We’re going to keep working on a lot of different things.”

The Commanders had until Saturday to decide whether to activate Chase Young off the physically unable to perform list to make his season debut. Instead, they'll wait another week for the edge rusher to return from tearing the ACL in his right knee.

Young would have been on what Rivera called a “pitch count” even if he did play. Washington's coaching staff and trainers are being extra careful with Young, who injured his knee more than a year ago and had surgery that involved grafting part of his left patellar tendon to fix the tear on the other side.

“The big part of it is, especially right now, is wanting to get as close as you can to live action, and you really can’t,” Rivera said. “So, we have to try and figure out how he can get as many as good reps in the next couple of days to get a good gauge of where he’s at.”

The Commanders have been clear they won’t rush back the second overall draft pick in 2020 who became Defensive Rookie of the Year and should end up being a franchise cornerstone.

DAMEON DOING IT ALL

Rookie running back Dameon Pierce has led Houston’s offense with 772 yards rushing, which tops all rookies and ranks fifth in the NFL.

Pierce also has 126 yards receiving and needs 102 yards of offense Sunday to become the third player in franchise history to reach 1,000 scrimmage yards in the first 10 games of a season, joining Arian Foster (four times) and DeAndre Hopkins. He would be the third rookie in team history to top 1,000 scrimmage yards in a season and the first since Steve Slaton in 2008.