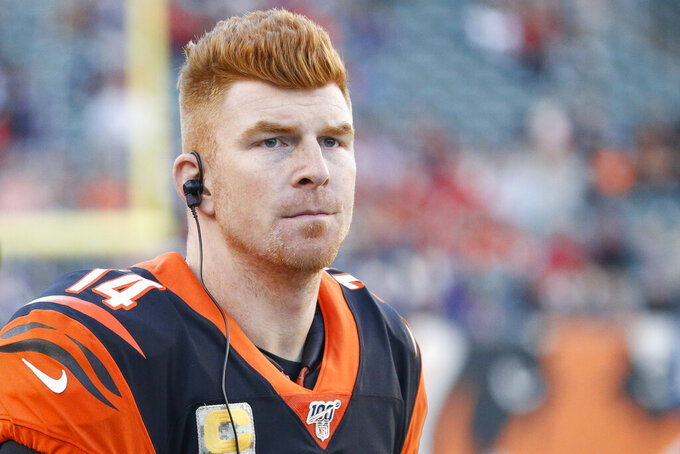 CINCINNATI (AP) — So much for thinking a different quarterback could make a difference.

The Bengals gave rookie Ryan Finley his debut and finally got their running game going in front of another sparse crowd at Paul Brown Stadium. The outcome? Pretty much the same.

Cincinnati remains the NFL's only winless team after another game of offensive ineptitude and defensive breakdowns. Lamar Jackson threw for three touchdowns and ran 47 yards for another score as the Ravens jumped on the 0-9 Bengals early and coasted.

"There's a ton to work on," Finley said.

Yep. And it goes way beyond the guy taking the snaps.

It went bad right from the start for Cincinnati. Marquise Brown got behind the coverage for a 49-yard catch on Baltimore's first play. Jackson completed passes of 49 and 19 yards in a blink-of-an-eye touchdown drive. And it never got much better.

The Ravens piled up 230 yards on their first three drives, all ending in touchdowns.

And then there's Finley.

The Bengals benched Andy Dalton during their bye to give the fourth-round pick a chance to audition for the starting job next season. Finley hadn't played since the preseason, when he faced opponents' backups. He hadn't worked out much with the starting offense until last week.

And he had the same challenges as Dalton, missing top receivers A.J. Green and John Ross.

The Bengals took some of the pressure off Finley by giving the ball to running back Joe Mixon a career-high 30 times. He ran for a season-high 114 yards, but it didn't much matter as Finley had two turnovers that gave the Ravens touchdowns.

Marcus Peters read the rookie's eyes and stepped in front of a sideline pass, returning the interception 89 yards for a touchdown. Tyus Bowser returned Finley's fumble 33 yards for another score.

The interception by Peters came on a throw to Alex Erickson that was slightly off, allowing the cornerback to step in front cleanly for the interception.

"He just jumped it," Finley said. "He gambles, and he gambled right. It was just a bad throw."

Finley finished 16 of 30 for 167 yards with a touchdown , the one interception and a pair of sacks. He also scrambled five times for 22 yards. Taylor plans to keep him in the starter's role as the Bengals decide whether to take a quarterback in the first round of the draft next year.

"All I can do is play my best, and give energy and give juice, and go help this team win its first game," Finley said. "So that's the plan."

The Bengals distributed 45,918 tickets for the game. Fans in the upper deck hung a banner that said, "If You Fix It, Dey Will Come."

"I can't even, because I've never experienced this before," Boyd said. "I've never been on a winless team up until this point."