Giants winless after four games with Joe Judge in charge 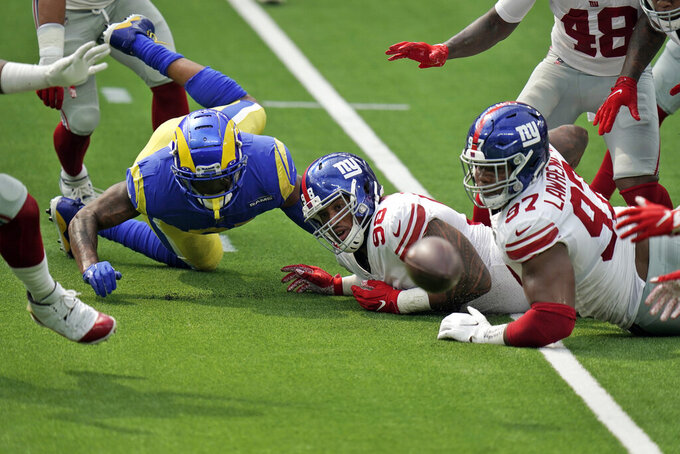 Los Angeles Rams tight end Gerald Everett, left, fumbles the ball which would then be recovered by the New York Giants during the first half of an NFL football game Sunday, Oct. 4, 2020, in Inglewood, Calif. (AP Photo/Jae C. Hong) 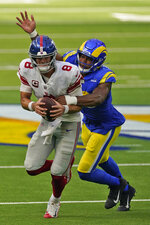 EAST RUTHERFORD, N.J. (AP) — The first-quarter marking period is over and it might be easy to make a knee-jerk reaction and give New York Giants coach Joe Judge a D for failing to win a game.

The 0-4 record is not what any fans hoped for when the 38-year-old former New England Patriots special teams coordinator was signed to become the coach in January. Consider, though, that Judge was taking over a team that won 12 games in the past three seasons. The roster is among the NFL’s youngest and the talent level needs to be built for success to follow.

The resurrection of this franchise is going to take time.

There are positives. The Giants were competitive in three of the four games. They play hard and the mistakes they make are to be expected from a team learning new systems. They just need more talent and they need to stay healthy.

Losing dynamic running back Saquon Barkley two games into the season with a major knee injury hurt, as did having receiver Sterling Shepard go on injured reserve with a foot damaged in the same game.

That's left second-year quarterback Daniel Jones to carry the load, both passing and running because of the struggles of the line.

And Jones is struggling. He has thrown two touchdowns in four games and turned the ball over seven times, including a pick on Sunday with the Giants down eight and driving in the final minutes of a 17-9 loss to the Rams.

He looked shell-shocked at times.

Judge defended Jones on Monday when asked about a coach knowing when a young quarterback is “their guy.”

“If you are asking is Daniel our quarterback, Daniel is our quarterback,” Judge said. “That's who we are playing with. We support him. We have a lot of confidence in him, faith in him. He is a young guy who is developing and we see a lot of progress from day to day."

Judge reiterated Jones has things he needs to learn and clean up, but he is the “guy.”

The answer might not get the Giants any wins but it certainly was the right thing to say with his team struggling to win a game. It lets a youngster know the coaching staff is not going to drop support of him in the heat of action.

The Giants all have to be better to gets wins.

This game it was the defense. Pat Graham's unit was on point against the high-powered Rams. Los Angeles was averaging 30 points, 27 first downs and 449.7 yards. The defense held it to 17 points, 15 first downs and 240 yards. The Rams gained 58 yards rushing. The only major play allowed was a 55-yard TD pass to Cooper Kupp on a blown assignment.

It was a major turnaround for a unit that gave up scores on seven of nine series the week before.

Jones is starting to look a little lost. He has not thrown a touchdown pass in three games after throwing one in 13 straight contests. He was sacked five times and was intercepted late while trying to force a pass. The sixth overall pick in the 2019 draft finished with a 65.7 passer rating.

Backup defensive lineman Austin Johnson. The five-year veteran was one of the keys to the defensive effort, making two tackles, sacking Jared Goff and forcing a fumble by tight end Gerald Everett that was recovered by James Bradberry. It led to a field goal.

Offensive coordinator Jason Garrett. The former Dallas Cowboys coach was supposed to make Jones and the offense hum like his old team with Dak Prescott and Zeke Elliott. It hasn't. The Giants have scored a league-worst 47 points, with the next closest team being the Jets, who have 65.

3 - Touchdowns in the first four games, including none in the last two.

The “real season” starts next weekend. New York travels to Dallas (1-3) to kick off a part of the schedule that features five NFC East opponents in the next six weeks. Judge and company have a shot at getting better within the weakest division in the league. They are a game behind Dallas and Washington and 1 1/2 behind the Eagles (1-2-1). After Dallas the schedule is Washington at home, at Philadelphia, Tampa Bay (3-1), at Washington and Philadelphia.