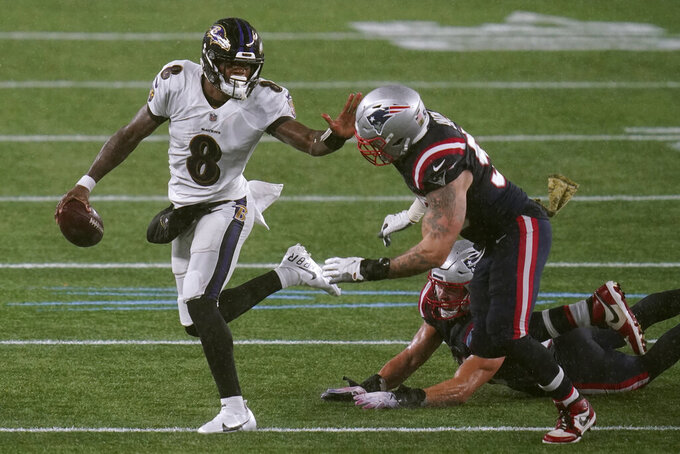 The Baltimore Ravens already have more regular-season losses than last year, and their chances of repeating as AFC North champions appear rather remote.

With an expansive injury list and games against Tennessee (6-3) and unbeaten Pittsburgh upcoming within a span of five days, the Ravens can only hope their miserable performance on a rainy, windy Sunday night in New England was only a blip rather than an indication of what lies ahead.

After losing tight end Nick Boyle for the season and making a flood of mistakes in a 23-17 loss to the rebuilding Patriots, the Ravens (6-3) find themselves three games behind the division-leading Steelers.

The Ravens had previously lost only to Kansas City and Pittsburgh. Then came this inexplicable clunker that ended Baltimore's 10-game road winning streak.

“I don’t think this loss is going to define our season by any means," wide receiver Willie Snead insisted. “We’ll get better from this.”

Last season, a 37-20 rout of the then-undefeated Patriots helped propel the Ravens to a 14-2 finish. There's no telling what impact Sunday night's game will have, beyond leaving Baltimore short-handed at tight end and on the defensive line. Run stopper Calais Campbell sat out with an ankle sprain and tackle Brandon Williams exited with an ankle injury that could keep him sidelined this Sunday against the Titans (6-3).

Baltimore's running game slogged for 115 yards, the 32nd straight game the Ravens have topped the 100-yard mark. Quarterback Lamar Jackson supplied 55 of those yards, but Mark Ingram was limited to 5 yards on five carries in his return from a two-game absence with an ankle injury.

The offensive and defensive lines are in dire need of reinforcements. Boyle (knee), an exceptional blocker, joined left tackle Ronnie Stanley (ankle) on injured reserve. D.J. Fluker struggled against New England and was replaced at right tackle by Patrick Mekari, who moved from right guard.

The loss of Boyle leaves Mark Andrews as the lone tight end, although versatile fullback Patrick Ricard is capable of playing the position. Hayden Hurst, who was traded to Atlanta during the offseason, sure would be useful now.

“We've got some guys on the practice squad and had a player in for a workout today," coach John Harbaugh said Monday.

With Campbell day to day and Williams “touch and go" this week according to Harbaugh, the defensive front will be pressed to stop Tennessee Derrick Henry, who ran for 195 yards against Baltimore in last season's playoffs.

Snead ran for a touchdown and caught a TD pass against the Patriots on a night when Andrews and wide receiver Marquise Brown were nonfactors.

Skura was applauded for returning to form so quickly after a knee injury cut short his 2019 season, but his snapping was inconsistent two weeks ago because of a cut on his hand, and he had difficultly with the wet ball Sunday. His poor snap ruined a fourth-and-1 try in the third quarter, and another one went awry in the fourth quarter, spoiling any chance the Ravens had for a comeback.

“The hand injury is not a factor. The snaps are concerning us, absolutely," Harbaugh said. “That was very costly. Matt knows he's got to get those snaps back there."

Boyle and Williams weren't the only losses on Sunday. Cornerback Terrell Bonds hurt his knee and will be out “a couple weeks," Harbaugh said.

31, 21 — The Ravens' NFL-record streak of scoring at least 20 points in 31 straight games ended. So did their run of forcing a turnover in 21 successive games.

The Titans gave Henry the ball 30 times in their 28-12 playoff win over the Ravens last January, and it could be more of the same Sunday against Baltimore's depleted defensive line.

“That's definitely going to be a concern and a factor," Harbaugh said. “It's an offensive line and a running back that are built to do what they do. They've very good at it. So we're going to have to be at our best to get it stopped."